ALS is a progressive, fatal motoneurone disease, ultimately leading to paralysis and respiratory failure within 3-5 years. There is currently only one FDA-approved drug, Riluzole, but its lack of disease prolongation combined with the aggressive disease nature means identifying new treatments is essential. This review highlights 3 of the most current and promising research areas.

Overall, there is promising research being conducted. However improvements in clinical trial techniques must be addressed in order to reliably compare findings from future studies, and allow identification of a cure in the future.

Also known as ‘Lou Gehrig’s Disease’, Amyotrophic Lateral Sclerosis (ALS) involves loss of upper and lower motoneurones from the brainstem and spinal cord. Symptoms progress from difficulty in limb movement to paralysis, and finally respiratory failure, the biggest cause of death in ALS. With a prevalence of approx. 2:100,000 and average onset age of 55 years, death usually occurs 3-5 years after onset.

Although first identified in 1869 by Jean-Martin Charcot, there remain no conclusive disease causes. The disease is classified into 2 types: Familial ALS (fALS), the inherited form, is responsible for approx. 10% of all cases. There are a handful of genetic mutations linked to fALS, including: C90RF72, TDP-43, FUS, Ubiquilin-2, and currently most relevant in disease-models, Cu2+/Zn2+ Superoxide Dismutase (SOD1). Sporadic (sALS) form comprises the majority of cases, and this unknown nature of the disease makes targeted treatments challenging.

Riluzole is currently the only FDA approved treatment for ALS, increasing life expectancy by 2 months. In 2011, ‘Nuedexta’ was also approved as a treatment for pseudobulbar effects in ND diseases. Patients must otherwise rely on palliative care to improve quality of life. This review will focus on the most current and widely researched areas. Proposed mechanisms of disease are beyond the scope of this review, but can be found in a review by Cleveland and Rothstein (2001).

Due to its infamous potential, stem cell (SC) therapy is perhaps the most widely researched treatment area. SC therapy aims to improve symptoms rather than cure the disease, by either targeting re-growth of neurones or promoting their survival. Here we will focus on clinical and pre-clinical SC trials in the last 5 years. 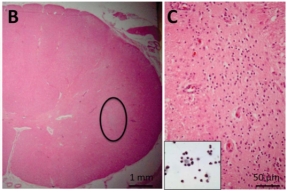 Despite multiple limitations to the experimental technique, such as absence of a control group, results indicated early SC transplantation has a good chance of slowing disease progression in ALS patients, as 50% of patients showed improvement in 6-15 month post-trial check-ups. The corresponding Phase II Trial commenced in September 2013, and is due for completion this month. 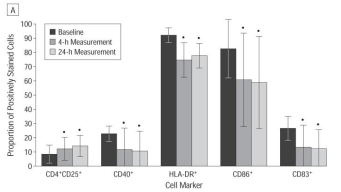 Reduction in immune response over 24hrs was in fact greater than seen in immunomodulatory medicines, suggesting additional mode of action for SC therapy. 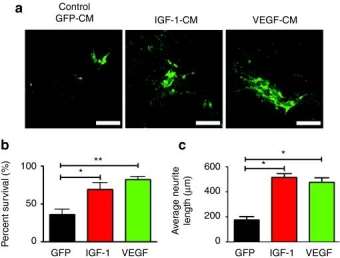 Subsequent mouse studies showed increased survival and decelerated reduction in hindlimb grip-strength and stamina on the rotarod, seen in Figure 4. 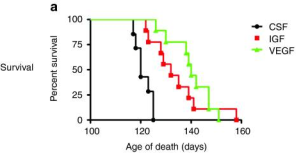 Phase-1 clinical-trials have shown safety of SC injection into CNS with promising, if unreliable, patient outcomes. The mechanism of improvement still unidentified, but hints at inflammatory regulation in neural protection may open an interesting avenue. GF application shows further potential based on rodent/mice studies with a proven effect at slowing disease progression and neuronal loss. SCs make suitable GF vectors as can be made to express/over-express GFs. Combining GF models with SC vectors for targeted delivery requires further exploration. Future trials must consider frequency, dose and administration technique. 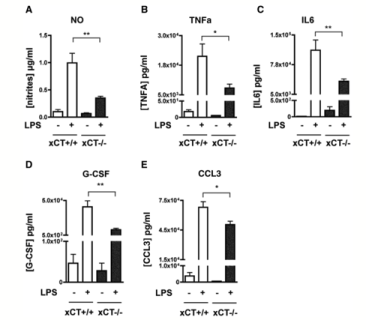 Interestingly, Mesci et al., also noted a 10-fold increase in anti-inflammatory M2 marker levels at pre-symptomatic phase in -/- mice which drops off at disease onset, indicating M1/M2 shift upon disease onset. Encouragingly, -/- microglia showed significant increase in motoneurone survival in -/- vs +/+ microglia, at 45% and 35% survival, respectively. This is indicative of a less neurotoxic environment. 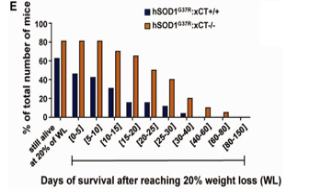 These anti-excitotoxicity findings are consistent with the action of Riluzole. Future drugs may target xC- system, however current antagonists are poorly specific and available to brain. Identification of a more suitable antagonist would be a good priority before further clinical trials.

They found both SOD1 mRNA and protein fell by 69±4% and 48±14%, respectively, in rodent cortices. Interestingly, this matched reduced protein levels by 42±14% in rodent CSF, indicating CSF levels are a good measure of levels in brain.

Unfortuntely, SOD1 cannot be a specific ALS marker due to its presence in other neurodegenerative diseases. However, its observed constant levels over time supports SOD1 as a good biomarker in indicating efficacy of antisense technologies and its effective targeting by ASOs may be useful in measuring brain SOD1 levels via CSF levels in future studies.

This review was restricted to three main research areas, but areas such as susceptibility gene identification, oxidative stress and protein misfolding, are also being explored.

Reliability of these studies, however, must be improved in order to draw accurate conclusions and compare findings from related studies. Ideally, a ‘standard trial protocol’ should be implemented. Trials must also consider long-term effects of reduced SOD1 levels (in antisense techniques) and immunosuppressant use (with stem cells). Some issues may possibly be alleviated by recent development of new autologous SC models (Meyers et al., 2014).

In short, current ALS treatments remain palliative care and Riluzole, but with new developments continuously emerging there is definitely an exciting research landscape ahead. In October 2014, ALSA requested Phase II Trial proposals to accelerate work in this area, meaning that the race is on to find suitable ALS treatment that may help patient prognosis in the future.