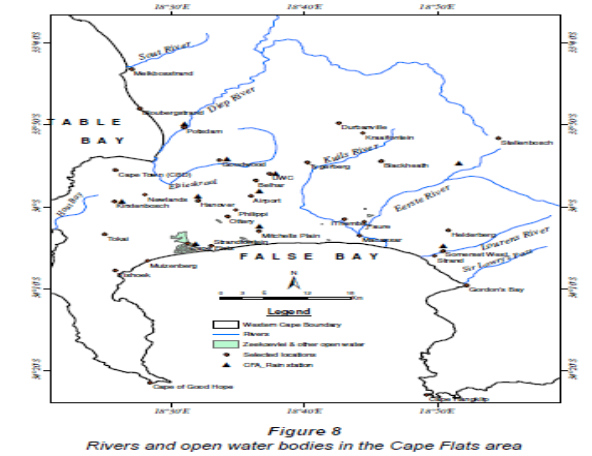 Aim: Is to determine the quality of water in the rivers of South Africa and determine the amount of pollution which may cause water borne disease.

Methods and Results: Water samples were collected from the Kuils River in the Northern Suburbs of Cape Town. These samples were subjected to a sterile process of a 10 fold serial dilution (10-2-10-7) and used the heterotrophic plate count method. The spread plates, which contained 0.1ml of the serial dilution, were incubated for 78 hours at a temperature of 37ËšC and then all the colony units in plates with 30-300 colony forming units were counted. It was found that that only the plates with 10-6 and 10-7 dilutions had Colony forming units under 300. It was found that Escherichia coli was present in the water sample due to its characteristic metallic green film suggesting that the water sample contain faecal pollution.

Conclusion: As Kuils River covers a large catchment area it is more susceptible to high pollution, especially due to the four sewage treatment plants which are situated at various points along the river and the two informal settlements Kayelitsha and Nyanga .

Significance and impact of the study: The study shows that river water is not safe to use, especially for those who rely on the river water for domestic use and drinking water. If simple purification methods can be taught to the people who use the rivers water it could reduce the mortality rate.

The South African constitution states that everyone has the right to an environment that is not harmful to their health and well-being. This includes the supply of ‘safe’, good quality drinking water. Water Quality Management in South Africa states that water quality is described as the physical, chemical and biological qualities of water (WQM, Online). In South Africa, water comes from Surface Water (rainfall and its runoff into rivers and dams) and groundwater (water from underground stores and aquifers). In order for drinking water to be seen as acceptable for ingestion, the water should not contain any harmful concentrations of chemicals or micro-organisms which could harm humans if ingested (DWAF, 2005).

Due to human activities, water becomes polluted. The consequence of this is that the increase in nutrient availability in the polluted water causes an increase in microbial growth. The large amount of pathogenic organisms cause a number of diseases when ingested which could prove fatal to the consumer. One of the major contributors to the microbial growth in a water source is the faecal content. The amount of faecal coliforms could cause a number of gastro-intestinal diseases. The most common form is diarrhea, dehydration from diarrhea could prove to be life threatening to infants, the elderly and he immune compromised (DWAF, 1996).

Diarrheal Disease is described as a disturbance in the balance between mechanisms controlling secretion and absorption of water and electrolytes in the intestine which results in its excessive loss in stools. Common causes include bacterial (Salmonella, Shigella, Campylobacter and pathogenic Escherichia coli), Parasitic (Entamoeba histolticia, Giardia Lamblia and Tricuris Trichuira and viral (Rota Virus) (Ireland et al, 1985). In mild diarrhea (not yet dehydrated or vomiting) is to replace the electrolytes in the body with electrolyte and glucose solution and continue oral fluids.

Escherichia coli (E.coli) counts are what determines if there are any faecal content in the river as E.coli comes from the large intestine of warm blooded animals, and humans as it is used for colonic salvage as the food content ferments before exiting the body. In the United States, the Environmental Protection Association sates that the maximum level of coliform bacteria in drinking water should be zero per 100ml of water (Water Research, Online). In South Africa, according to the department of water works, E.coli counts raw sewage are usually more than one million organisms per 100ml, in pristine (unpolluted water) surface waters counts of 1 – 10 are common. Polluted water can contain counts in the range of 10 – 1000000 organisms per 100ml depending on the degree on faecal contamination.

According to Kassner (1987) other water borne diseases which are spread by the gastro intestinal system are: Amoebic Dysentery, Bacillary Dysentery, Bilharzia, Cholera, Parasitic ova, Para-typhoid fever, Streptococcal infections and Typhoid fever, yeasts and fungi and Salmonella.

Amoebic Dysentery is an acute or chronic disease which can be characterized by inflammation and ulceration of the colons mucous membrane. It is caused by Entamoeba Histolticia which is highly resistant to change and is ingested due to faecal contamination.

Cholera, although not common in Cape Town, is an acute infectious, formidable, notifiable disease characterized by severe diarrhea. This is caused by Vibrio Bacilli’s which produces an exotoxin which are thought to have an effect on the permeability of membranes.

Salmonellosis is an infection caused by bacteria called Salmonella. Symptoms include diarrhea, fever, and abdominal cramps 12 to 72 hours after infection and lasts about 4 to 7 days (CDC, 2012)

The water sample taken in this experiment was obtained from the Kuils River located in the Northern Suburbs in Cape Town (origin: Durbanville, Mouth: False Bay) which runs through industrial area’s informal settlements (Kayelitsha and Nyanga) and four major sewage Macassar, Zandvliet, Scotsdene and Stellenbosch which release treated effluents into the river (Fourie, 2005)

From the sample obtained from the Kuils River one can determine the quality of water in the rivers of South Africa and determine the amount of pollution which may cause water borne disease.

Temperature: The sample was kept at the lowest temperature possible by placing it on ice

Incubation Time: The samples were kept incubated for 24 hours before testing.

Method: A small amount of the collected sample was used in a sterile process. The sample was used to make a 10 fold serial dilution adding 0.1 ml solution each time using a sterile micropipette and pipette. Six petri dishes with general agar was used and six Eosin Methylene Blue (selective media) dishes were used for the spread plate method. To spread the 0.1 ml solutions a hockey stick sterilized with 75% Ether was used.

Incubation time and Temperature: The samples were then incubated for 72 hours at 37ËšC as this is the temperature at which pathogenic organisms would grow if they were to be injested by humans).Total heterotrophic counts were done on nutrient agar plates (Merck, Biolab Diagnostics) (Paulse et al, 2009)

Noticeable characteristics of incubated agar: On the Eosin Methylene Blue it was noted that a greet metallic shine appeared over the bacteria which is a characteristic of E.coli

It is observed that the nutrient agar allowed more bacteria to grow on its surface than the selective media which favored the growth of E. coli. E. coli is one of the indicators of faecal content in the sample water which could lead then to numerous water bourne diseases.

Globally diseases waterborne and sanitation-related infections are one of the major contributors to diseases burden and mortality (Prüss and Havelaar 2001). As the Kuils River covers a large catchment area which includes sewage plants and rural areas who continuously use the river as a dump site and sewage works are not regularly upgraded, untreated storm water freely discharges into the river which continues to increase the rivers microbial growth (Fourie, 2005). Dallas and Day (2004) states that urbanization (rural settlements) and storm water runoff has the most severe impact on aquatic ecosystems and river health. As the urban development’s continue to expand, catchments become runoff channels, which gathering pollutants in receiving rivers and streams which then becomes a hazard for the people surrounding the river banks who use it for various domestic uses, especially drinking water.

Prüss, A. and Havelaar, A. (2001) The global burden of disease study and applications in water, sanitation and hygiene. In Water Quality: Guidelines, Standards and Health ed. Fewtrell, L. and Bartram, J. pp. 43–59. London: IWA Publishing