Biomechanics focuses on the science of the mechanisms through which musculoskeletal components interact to create movement which can be used to improve skills and prevent injury. (McBride 2016) Having insight into how bodily movements are carried out gives professionals a platform to facilitate the design of safe and effective programs. (McBride, 2016) The sport we will be analyzing will be Volleyball, or more specifically the spike in Volleyball. The three biomechanical principles we will be focusing on are shown below in a table briefly explaining how these biomechanical principles will affect spiking in Volleyball.

The Volleyball spike is classified as a throw-like pushing force because the joints used in the kinetic chain extend in sequence one after another. As shown below. 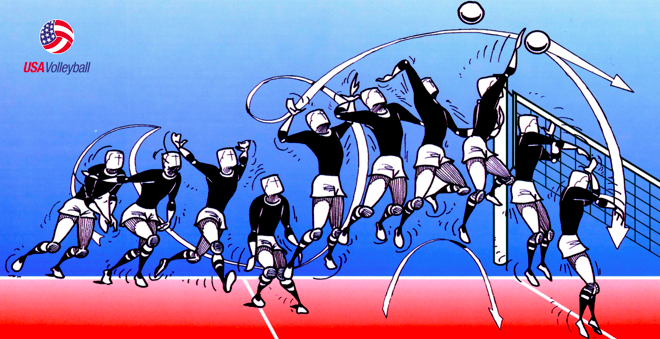 The ability to accelerate a mass depends on a change in velocity resulting from the application of external force. (Deweese et.al 2016) We see similar overarm techniques performed in sports such a bowler in cricket or tennis when serving. These techniques vary for throwing or hitting the ball because of its size, weight & strategies. (Wagner et al.2012)  Arguably the most aggressive move in Volleyball is the spike shown above. The optimal technique is to hit the ball above its center of mass with the palm of your hand whilst snapping the wrist to generate topspin. (De Blaquiete 2015) During this movement the triceps would act as the agonist extending the elbow to hit the ball, while reaching full extension the bicep would act as the antagonist to slow down elbow extension and bring it to a stop, protecting elbow structures from internal impact. (McBride, 2016)

The force causes the body to change, according to Newtons Law, an object at rest will remain at rest. An object in motion will stay in motion unless acted upon by an unbalanced force. The second law introduced here is the acceleration of an object (in this case the ball) is proportional to the applied force and in the same direction. (Blazevich, 2012) The two most vital aspects of reactionary laws here are between the floor & the players’ feet. Without these forces, the players would not be able to push against the ground and propel themselves into the air, thus never being able to leave the ground. The two forces need to counter each other by working in pairs. As shown in the diagram below. When the feet are pressed to the ground and in the final step before leaping up to spike the ball, the ground reacts by opposing the force exhibited by the players feet, in this case the force exerted by the volleyball players feet is the pushing force, and the force exerted from the ground is the reactionary force. 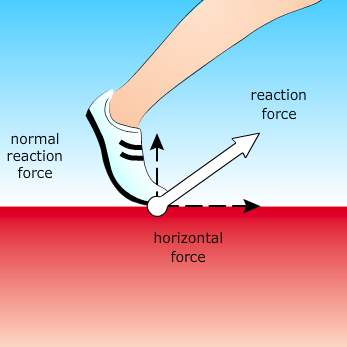 Momentum is one of the most important aspects when it comes to Volleyball as you are transferring your force to propel the ball forward. Momentum is the product of velocity and mass and involves countless amounts of motion in a straight line. An example of this could be a sprinter, during a sprint an athlete’s body mass remains the same. Due to this, the only way to achieve a greater impulse is to generate a greater force. (Deweese et.al 2016)  Stabilization is a key aspect of this momentum. As soon as the body is stable, the body can maximize the momentum of the volleyball being hit in the air immediately. The body requires to stay stable before jumping for the spike by lowering the center of gravity and widening the base of support. This is the final stage of the jump to prepare for the spike and is a great example of reactionary force. By lowering the center of mass to the ground as seen below, it creates a bigger force acting on the ground, which equals the force then acting on the body. (De Blaquiete 2015)  The momentum from the run in alongside the vertical force from the push of the legs on the ground creates a bigger force propelling the player upward. (Blavevich, 2012) 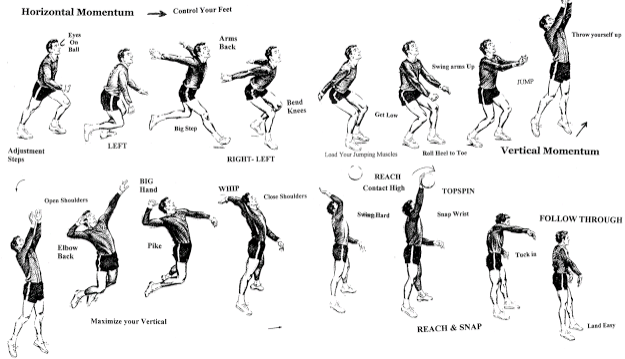 If there is no significant force behind the ball it will not be spiked. Most players when attempting to spike the ball will take 3 large steps before stopping and converting the force gained from momentum into the ball.  Once spiked, the volleyball usually travels in a downward force, the only thing that can stop this force is the net, the blockers hand, the ground, or the recipient’s forearms propping it up to one of their teammates. This another example of reactionary force. (Blavevich, 2012) The wrist must snap when making contact with the volleyball above its center of mass when spiking, this generates topspin so the ball can dip to land inside the court. A lot of force and no wrist snap will send the ball out of court or result in an easy deflection. Opposition blockers will be using their arms as a reactionary force to stop the volleyball or force it back over the net. Topspin is essential to beat the block. By generating enough topspin and manipulating the direction in which the ball travels, even if the ball does go into the opposition blockers, the force generated by the spin will force and deflect the ball down off their forearms which is a result of friction and gravity. A professional spiker on average spikes 40,000 times per year, so technique is critical to remain consistent & prevent injury. (Forthomme, 2013) 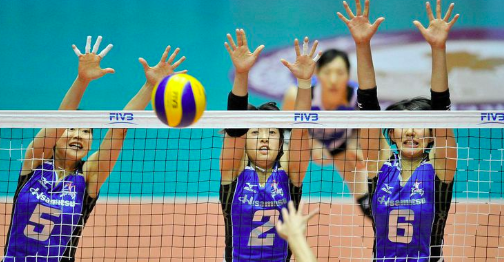 In conclusion, in order to optimize the power & accuracy of the spike, these biomechanics are applied. The volleyball spike is made up of 4 stages including; the preparation phase which generates the momentum and force, the jump which is an example of reactionary force against the ground and finally the arm swing and the contact phase which is a mixture of a pushing force, reactionary force as well as hitting above the center of mass to generate top spin which causes a forward moving ball, the friction against the air or a players arms will result the dip in the ball so it lands inside the zone and generates points for your team.

The deadlift uses all 3 planes of movement. (Quin, 2015) The anatomical planes are useful for describing major body movements, this being a compound exercise we notice in this movement the first plane we move through is the sagittal plane as the bar is lifted off the ground. (McBride, 2016) The 2nd plane of motion represents the side-to-side motion, using the erector spinae and abdominal muscles as stabilizers this allows a clean lift to raise the weights on the end of the bar simultaneously. This is important for keeping a strict posture. (Barber et.al 2013) A lack of stability from the muscles & joints being used would result in an uneven lift & possible injury. The final plane being the transverse plane resists rotational movement of the bar (Quin, 2015). If you were unstable during this transition of the lift, you would rotate as you lifted the bar.

The joints we will focus on the knee & hips specifically alongside the muscles used to assist their movement which is; the gluteus maximus, hamstrings & quadriceps. The lift-off is initiated by knee extension followed by the hip extension. The starting position of the deadlift involves a bent knee as seen below. The prime mover would be the glutes because they will need to extend the hip into an upright position resulting in a lockout. This is because it is the muscle most directly involved in bringing about the movement. We can also refer to the glutes here as the agonist. (McBride, 2016) The antagonist muscle slows down or stops the movement. So this would be the hip flexors. They will relax to let the hips return to a neutral position once achieving lockout. The hamstrings & quadriceps work alongside the glutes in hip extension. These would be recognized as the synergist muscle as they are assisting indirectly with the prime mover. (McBride, 2016) 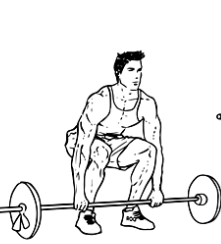 The erector spinae & abdominal muscles are then isometrically stabilized alongside lumbar convexity as knees and the hips extend back which allows support to lift the bar off the ground. This would cause the gluteus maximus, hamstrings & quadriceps to act concentrically to resist against gravity in order to lift the weight off the ground. The back is kept straight and acts as a single lever with the fulcrum located at the hips. The knee is extended by the quadriceps & the soleus plantar flexes the ankle allowing the shin to become upright from a forward angled position at the bottom of the deadlift. On knee extension, the patella helps to prevent large changes in the mechanical advantage keeping the quadriceps tendon from falling in close to the axis of rotation. (McBride, 2016) While lifting the muscles in the back isometrically stabilize the shoulder complex. A strong shoulder complex will aid the erector spinae to keep a neutral spine to prevent hunching and possible injury. 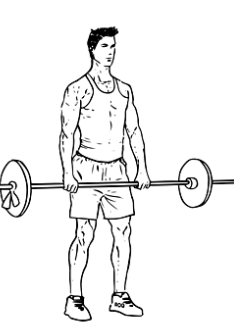 This happens via knee extension & hip extension. The knees in this movement only have a small amount of movement. Knees must lockout slowly along with the hips to allow a smooth movement resulting in no muscle being overly stressed. In order for the bar to be lifted off the ground & achieve lockout the muscles being used must be greater than that of the external resistance, which is why the muscles here are being concentrically used in order to achieve a full repetition.

For the downward movement, there is flexion in both the knees & hips while the type of muscle action here is eccentric while resisting against the force of gravity when lowering the weight back to a safe position. There is significantly less knee bend in the downward phase of this movement thus hamstrings here are the synergist during the eccentric phase of the movement. The quadriceps here are also acting eccentrically while lowering the weight back to it’s starting position. The abdominal muscles & erector spinae act as fixator muscles while the trapezius keeps the shoulders held back and the neck extensors keep the head upright to avoid rounding your back when lowering the weight. (Barber et.al 2013)

It is important that in the early stages of the deadlift the hamstrings are used as a stabilizer, as the movement progresses the hamstrings then act as a synergist to then the prime mover which is the glutes allowing a clean movement up. In any standing position, any force we exert with the upper body must be transmitted through the back to the legs. Especially for compound movements such as the deadlift. This is due to the back muscles being at a mechanical disadvantage, therefore the individual must generate forces much greater than the object lifted as well as being put down. If not done correctly the back is vulnerable to injury. This is not surprising given the extremely high compressive forces on the disks during lifting. Which is why it is important that we analyze and break down the movement of the deadlift to ensure a proper technique and form which does not place the individual at risk (McBride, 2016)