Characterization Of Leishmania Major In Dogs 2

Characterization of Leishmania major in dogs as a reservoir of the parasite, in Shiraz, southern Iran

Cutaneous leishmaniasis (CL) with diverse clinical manifestations is prevalent and remains a major public health problem in Iran and its incidence has been increased over the last decade. The primary hosts of Leishmania are sylvatic mammals of several orders (Rodentia, Marsupialia, Carnivora, etc.). A PCR assay using a of species-specific pair of primers followed by sequencing the positive samples were employed in order to identify Leishmania major as the causative agent of cutaneous leishmaniosis in two dogs having skin lesions. Considering the roles of various animal species as reservoirs of the parasite, here, we have introduced dogs as rare species of animals to function as a reservoir for parasite, in Shiraz.

Leishmaniasis is a spectrum of diseases caused by infection with different species of the protozoan parasite Leishmania. It is a serious public health problem and affects over 12 million people in many parts of the world (WHO, 1990). Cutaneous leishmaniasis (CL) is caused by L. tropica, L.aethiopicaand L. major in the old world, and by L. mexicana, L. guyanensis, L.amazonensis and L. braziliensis in the new world (Alvar et al.,2012; Reithinger et al.,2007). Cutaneous leishmaniasis (CL) occurs in many areas of Iran, having been reported in 17 of the 30 provinces (Nadim, 2000; Yaghoobi-Ershadi et al., 2004) in which,L. major and L. tropica are the primary agents of zoonotic cutaneous leishmniasis (ZCL) and anthroponotic cutaneous leishmaniasis (ACL), respectively (Nadim and Seyedi-Rashti, 1971). One of the endemic foci of leishmaniasis in Iran is Shiraz, southwest area. The number of reported CL cases has increased in recent years: from 2000 to 2003, a total of 3975 cases were officially reported from Shiraz (600 cases from a rural area of southern Shiraz, with an annual mean population of 36 987 in 40 villages) (Razmjou et al., 2009). In surrounded Shiraz, Meriones libycus was confirmed as the main reservoir host of ZCL in Arsanjan and Neiriz city (Rassi et al., 2001; Rassi et al., 2006). Domestic dogs known to be the main VL and CL reservoir, they are regularly investigated in endemic areas to prevent, principally, severe and often fatal VL in humans (Grimaldi and Tesh, 1993). CL can be very difficult to treat, long-lasting and disfiguring. CL is characterized by the development of an ulcerative skin lesion, which contains numerous parasites. Although the clinical features of CL can vary because of different causative species, a classical lesion starts as a papule or nodule at the site of parasite inoculation and slowly expands (Reithinger et al., 2007).

Despite the significant contribution of a variety of molecular methods for identifying Leishmania, these methods are time consuming and expensive for diagnosistic purposes. In contrast, a specific PCR-based method is appealing as it is rapid, sensitive, and specific, avoiding culturing of parasites, thus being suitable for Leishmaniasis surveillance programs that require efficient laboratorial response for rapid and effective actions (Rodriguez et al., 1994; Fernandes et al., 1996; Schallig and Oskam, 2002; Volpini et al., 2003; Marfurt et al., 2003).

To help implement future control measures, it is imperative to determine the prevalence of the disease in the reservoir. Therefore, the purpose of this study was to examine the epidemiological

features of CL in Shiraz, to further identify the causative species of leishmaniasis in the clinical samples collected from dogs, using a species- specific PCR assay.

During September 2013, 3-5 ml EDTA-treated whole blood samples from 25 dogs –referred to the School of Vet Medicine, Shiraz- were collected by cephalic vein puncture. All members of the dogs were initiallyexamined clinically for the presence of ulcer or scar. The Samples were subsequently subjected by a PCR assay to identify whether any causative agent of Leishmania was confirmed. After samplecollection, a questionnaire was used to collectinformation regarding the age, gender, and species of each dog.

Extraction of DNA from the clinical samples

The whole blood samples were transferred into 1.5 ml micro tubes before being lysed in 250 µl of lysis buffer (containing 50 mMNaCl, 10 mM EDTA, 1% SDS 50 mMTris-HCL). The final concentrations for SDS and proteinase K were 5% and 200 µg ml-1, respectively. RNase was also added at the final concentration of 100 µg ml-1 (incubated with the solution at37 º C for 30 min.).

The samples rotated in a hybridization oven at 56 º C and digested overnight. The samples were gently been mixed for 5 min. After centrifugation of the samples at 10000 rpm, the upper layers were collected in new micro tubes and equal volume of chloroform was then added and centrifuged for 1 min. The upper phase was removed and precipitated with 50 µl of 3 M sodium acetate (pH 6.0) and 500 µl cold Isopropanol (kept in -20 º C), followed by storage on ice for 1 hour. The specimens were subsequently centrifuged at 10000 rpm for 5 min at 4 º C. The Isopropanol layer was then removed following by washing the DNA pellet in 200 µl of 70% ethanol. After another centrifugation for 10 min. the ethanol phase was removed and the vacuum dried DNA was resuspended in 30 µl DNA free water. It was finally aliquoted and stored at -20 º C for further use.

and 5-CGC ACT ATT TTA CAC CAA CCC C -3, which target the ampliï¬cation of the 120-bp conserved region of the LeishmaniakDNAminicircle of all Leishmania species. A reaction mixture was prepared that contained 50mmol/L KCl, 10mmol/ L Tris-HCl (pH, 8.0), 0.2 mmol/L each deoxyribonucleotide (Invitrogen), 1 mmol/L each primer, 1.25 U of Taq polymerase (Invitrogen), and 2.5 mL of DNA sample in a ï¬nal volume of 25 mL. The PCR conditions were as follows: denaturation at 94ºC for 3 min, followed by 30 cycles of 94º C for 30 s, 55ºC for 30 s, and 94ºC for 45s, with a ï¬nal extension of 72ºCfor 10 min. The ampliï¬cation reactions were analyzed by 1% agarose gel electrophoresis, followed by ethidium bromide staining andvisualization under UV light (Indiani de Oliveira et al., 2003)

The amplified genes were finally extracted from gels using QIAquick gel extraction kit (Bioneer, USA) as was described by the manufacturer. The pured products were finally subjected for sequencing (Macrogen, South Korea).

Fisher’s exact test was used to compare to the gender, clinical status and PCR findings. The differences were considered statistically significant when Pvalue was

Table1.Frequency of the skin lesions in both genders in dog

A: Absence of the skin lesions

Table2. Frequency of the skin lesions in different breeds of dogs

A: Absence of the skin lesions

The PCR results showed, two positive cases (out of 25 dogs) which were belong to the male German shepherd, breed (one to two years old). No significant difference was found between the skin lesions and leshmaniasis (P=0.15). The infection rate was significantly higher in the male dogs (P=0.034). Frequency of the skin lesions in various age groups (under 1 year, 1-3 years and above 3 years) were respectively 3, 4 and 3. Frequency of the skin lesions in both of genders and different breeds of dogs showed in table 1 and 2.

The result of sequencing was recorded in the gene bank with the accession number of KM016967 (not released in the Gene bank, yet).

CL is the most common form of leishmaniasis worldwide, representing 50–75% of all new cases. According to the World Health Organization (WHO), the number of CL cases is around 1–1.5 million annually, and 90% of CL cases occur in seven countries; Afghanistan, Algeria, Brazil, Iran, Peru, SaudiArabia and Syria (Alvar et al.,2012; Reithinger et al.,2007).

The current study was focused on the identification of cutaneous leishmaniasis in various breeds of dogs in Shiraz. Using a PCR assay, L.major was further confirmed in two dogs for the first time. Regardless to a non-significant difference between the presence of skin lesions and leishmaniasis which was possibility due to the low number of cases, conformation of L.major which is a main zoonotic species is considered as a potent reservoir to infect humans. Since German shepherd is mainly used as guard dogs keeping in the rural areas, such an infection may be closely associated with the human CL.

Transmission of Leishmania parasites is anthroponotic (human to vector to human) in the Indian subcontinent and Asia is zoonotic (animal to vector to human), where dogs and rodents act as reservoir (Alvar et al. 2004; Postigo, 2010; Reithinger et al., 2007). Dogs have long been implicated as the main domestic reservoirs of Leishmania (Leishmania) infantum, the etiological agent of zoonotic visceral leishmaniasis (Moreno and Alvar, 2002; Alvar et al., 2004), while, dogs play major role as reservoirs of different forms of leishmaniasis, worldwide. In a report from Egypt, dogs have been documented as L. major as the causative agent of cutaneous leishmaniasis (Morsy et al., 1987).

The prevalence of scars and active lesions was 2.5% and 1.6% respectively in the 3086 residents of Dehsorkh district and 6% and 4% respectively in the school children using RAPD PCR in Mobarakeh county, central Iran in 2003.Among rodents, 7 of 18 Nesokiaindica (39%) and 1 of 9 Merionespersicus(11%) were found to be infected with Leishmania major (Emamia et al., 2009).

As it mentioned, the dog is not the only reservoir host of the etiological agent of ZCL, as such phlebotoumus papatasi was reported elsewhere from Iran. For instances, Ten (1.8%) out of 549 female P. papatasiwas found to be infected with L. major based on the PCR detection and sequencing of parasite ITS-rDNA in Natanz, Isfahan province in centre of Iran, in a focus of rural ZCL (Parvizi et al. 2010). In addition, rodents was also considered as the reservoirs of L.major in the central and south of Iran (Emamia et al., 2009, Rassi et al. 2006, Asgar et al., 2007)

Based on mathematical models, insecticidal control of sandflies appears to represent a more effective way of reducing Leishmania infantum transmission than the present strategy of culling infected dogs in Latin America as well as being more acceptable to the human population. Since man is a dead-end host of most Leishmania species, treatment of existing human cases generally does not affect transmission. Interruption of the cycle by vector control may offer a cheaper, more practical solution to treatment and improved knowledge of the alternatives available could lead to preventative measures being undertaken in more leishmaniasis foci (Maroli and Khoury, 2004).

In recent years, both cutaneous (CL) and zoonotic visceral leishmaniasis (ZVL) have become increasingly prevalent in urban areas, including large Latin American cities. A similar trend has been recorded in all Mediterranean areas during the last decade. Where dogs are the unique domestic reservoir, a reduction in Leishmania transmission would be expected if we could combine an effective mass treatment of infected dogs with a protection of both healthy and infected dogs from the sandfly bites. Laboratory and field evaluations have shown that impregnated dog collars and topical application of insecticides could protect dogs from most sandfly bites by means of both anti-feeding and killing effect of the pirethorids used (Maroli and Khoury, 2004).

Control measures for leishmaniasis are heavily dependent on chemotherapy. Currently employed drugs are associated with severe toxic side effects and increasing parasite drug resistance.This has forced researchers to think about other control measures, and in particular, the development and implementation of an effective vaccine (Croft et al., 2006; Sundar, 2001 )

As a brief conclusion, result of our study showed that L.major was found in dogs which was for merely established as a main(rare) case of cutaneous leishmaniasis. Thus, we have introduced dogs as the main resorvior of parasite in Shiraz, south of Iran. 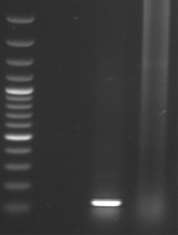 Parvizi P., N. Baghban, E. Alaee Novin, and A. Absavaran, 2010: Detection, identification and molecular typing of Leishmania major in Phlebotomuspapatasi from a focus of zoonotic cutaneous leishmaniasis in central of Iran. Exp. Parasitol. 124 , 232-237.