It has been observed that In spite of the fact that the food production has increased almost twice in the last few decades, but there are people who are insecure of the food conditions and do not get enough nutritious food to eat (Wu et al. 2011). As per the world population data the people who do not get adequate nutritious food to eat has reached to the extent of 870 million in 2013 (FAO et al. 2013), also it has been stated that, by the end of 2050, food production globally has to increase by 70 to 100 percent so that the total world population can had nutritious food to eat. (Bruinsma, 2009; Parry and Hawkesford, 2010; Zhu et al., 2010)

It is also necessary that preventive steps are to be taken so as to reduce the global warming and greenhouse effect and ozone depletion.

As per the UN population prospects, the population of world is expected to grow by 34 percent from 6.8 billion to 9.1 billion in 2050, so this increase in the population is the main reason for increased demand of the food. 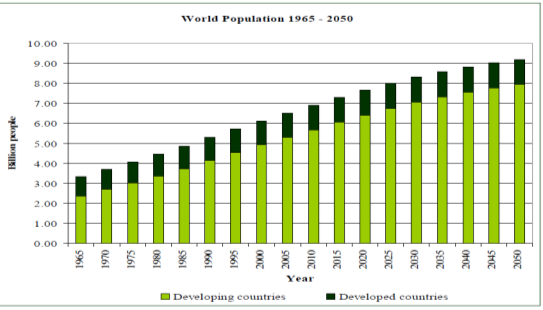 It has also been noted that China and India, are the world’s most populated countries, both are bhaving more than 1 billion inhabitants; each has sustained once a year gross domestic product (GDP) growth rate over 10 years ago that is among the world’s highest — 9 percent for China and 7 percent for India.

As per the National Defense Research Institute (2011) although the population of India is lesser than that of china, but at the present scenario population growth of India is 1.55 percent yearly more than double China’s 0.66 percent.

It has been estimated that by 2025, the total population of India will be equal to that of China thus making India most populous country in the world.

Global food systems consist of production and supply of foods and its consumptionFigure 2describes the overview of this food system. On the basis of the national level, supply is basically a function of national production and imports minus exports. The difference between supply and consumption is the gap caused by losses in the food chain. 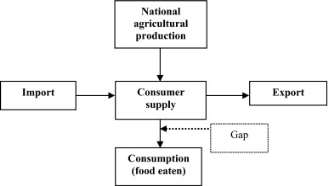 In the year 1961, FAO gave information on the annual market supply to all the countries in world, for the production of agricultural commodities. (Gerbens-Leenes, 2010).

Land degradation is basically temporary or permanent decline in ecosystem function and productive capacity. It can be destruction or deterioration in health of terrestrial ecosystems, which affects the biodiversity, natural ecological processes and ecosystem resilience, it can also reduce the biological/economic productivity and complexity of croplands, pasture, woodland, forest, etc. This can result to numerous factors like anthropogenic (human-related) activities such as unsustainable land management practices and climatic variations.

The accelerated degradation is normally linked with human alteration of the environment. Degradation process can be deforestation and desertification.

There are different cause for the degradation of land and they are soil erosion by wind or water, natural conditions, topography, weather/climatic conditions, high intensity rainfall, natural hazards, unsustainable agricultural practices, habitat alteration. 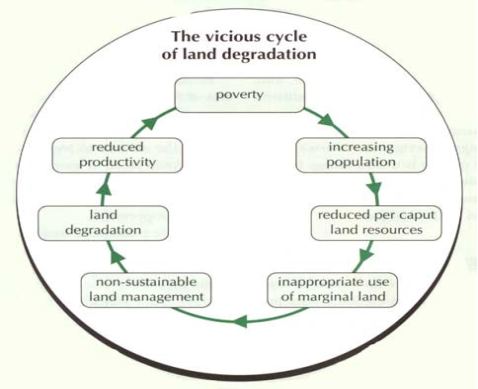 Measurement of Disease and Its Effect on Yield

Plant diseases are those that either kill the plant or reduce the ability of a plant to survive, produce flowers or fruit. They are caused by micro-organisms normally referred to as pathogens; which include fungi, bacteria and viruses, although it is very difficult to measure the severity of plant disease.

There are certain diseases but major plants disease include in which the leaves are not shaped properly; the symptoms cannot be identified and they can be from a few isolated lesions to also collapsing of the entire plant. Moreover there is no relationship between measures of symptoms and the failure to reach achievable yields .

Thus it has been observed that the measurement of yield is highly controversial. However, the relation of plant disease to yield is not be very clear and it will need some proper measurement. (annualreviews,2014)

A major concern to maintaining future water supplies is the continuing over-draft of surface and groundwater resources. As a result, there is decline in available surface water and groundwater for irrigation. It has been observed that climatic change has an impact on the global food security and change in water and food supply. Moreover this change in the Climate can affect the production of agriculture and food security by altering the distribution of rainfall, and also the availability of water, land, capital, biodiversity and terrestrial resources.

Furthermore, this change in the climate will also have an adverse impact on food and crop productivity, which can affect food security ( Hanjara and Qureshi, 2010).

It has also been seen that the global warming can increase yields which can be due to negative effect of fertilizer, by rising presence of carbon di oxide present in the atmosphere, but this can have a negative impact on poor countries.

An increased level of carbon dioxide in the atmosphere is the main reason for increase in the global warming. As per certain studies at the Carnegie Institution for Science, in some regions more than a quarter of the warming result from increased carbon dioxide it is due to its direct impact on vegetation. Thus this increase in temperature and also an increase in the carbon dioxide levels have a heat-trapping greenhouse gas. For scientists trying to predict global climate change in the coming century, the study underscores the importance of including plants in their climate models. Plants during the photosynthesis take carbon dioxide out of the atmosphere, but they also have some other effects, like change in the rate of evaporation from the land surface. Thus the effect of carbon dioxide as a greenhouse gas have been well known as pointed out by Caldeira. Moreover there is no doubt that carbon dioxide decreases evaporative cooling by plants and that this decreased cooling adds to global warming.

The greenhouse effect is basically when the short-wave solar radiation heats the surface of the Earth, and this energy is radiated back through the Earth’s atmosphere as heat, radiations of wavelengths 5-30µm is absorbed by water vapourand carbon dioxide, which in turn radiate it, thus heating the atmosphere and land and ocean surface.

This happens on its own and is natural and this is what is the reason that keeps the Earth habitable. Greenhouse keeps the average surface temperature would be about minus 18°C, which is same as on the moon.

There is a difference of some 33°C substantially to natural levels of water vapour (60%, or more including clouds) and carbon dioxide in the Earth’s atmosphere. In respect to enhancing the greenhouse effect, the particular issue is focused in the 8-18µm band where water vapour is a weak absorber of radiation and where the Earth’s thermal radiation is greatest.

As methane is stronger greenhouse gas because it has more atoms in the molecule than CO2. The radioactive effect is caused by infrared absorption, and molecules with more atoms absorb more infrared energy. IR absorption is by the electrons that bond between atoms in a molecule and the way those atoms vibrate.

This graph, based on the comparison of atmospheric samples contained in ice cores and more recent direct measurements, provides evidence that atmospheric CO2has increased since the Industrial Revolution: 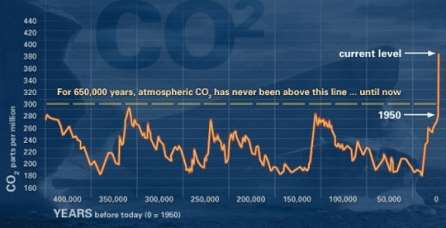 Increase in Pests And Disease

As per a report in the journalSciencein June 2002 it says that there is a alarming increase in diseases, this can be due to change in climate. Accordingly it has been pointed out by authors that a, “Climate change is disrupting natural ecosystems in a way that is making life better for infectious diseases.”

TheWorld Watch Institutehas reported that the Earth’s ice cover is melting in more places and at higher rates. (March 6, 2000).this can also have impact to many coastlines and small countries, and a large population of people of humanity lives near the coasts or by major rivers. 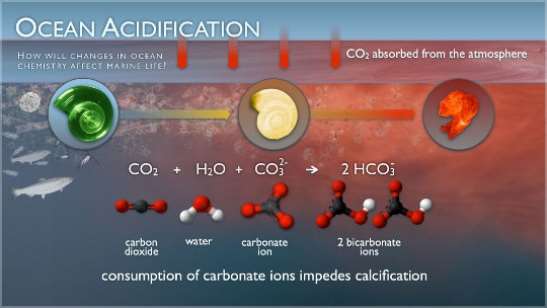 The relationship of Green house and Ozone Depletion

The ozone layer is very important as it protect the environment from the harmful rays of the sun light. Thus ozone shield is important as it forms a barrier and protects plant and animal life on land from the sun’s ultraviolet rays, which may cause skin cancer, cataracts, and damage to the immune system. Ozone layer depletion can also alter the DNA living creature on the earth. Thus ozone layer is very important for the life in the earth. Shindell, et. al. wrote inNature, that “Greenhouse gases warm the Earth’s surface but cool the stratosphere radiative, and therefore affect ozone depletion.” Moreover by the end of 2019, Shindell,et al. expects that the ozone layer may reduce by two-thirds in the Arctic poles.

Not only this, the severity and duration of the ozone hole in Antarctic are also likely to increase, this may be because of greenhouse-gas-induced stratospheric cooling over the coming decades.As reported by NASA researchers and also by European, Japanese, and Canadian scientists, there is a connection between global warming, a cooling stratosphere, and depletion of stratospheric ozone. The report also says that the ozone layer is having a stabilizing effect on the Antarctic poles, whereas ozone levels in the Arctic circle is still falling.

As per (Bruinsma 2011), there has to be an increase in total global food production by at least 70 to 100 percent by the end of year 2050. It’s only then we can adequately feed a global population of nine billion people at that time. It has been already seen that China and India, the world’s most populated nations, and both the country has more than 1 billion inhabitants; each has sustained once a year gross domestic product (GDP) growth rate over 10 years ago that is among the world’s highest 9 percent for China and 7 percent for India, moreover it has been estimated that by the year 2025, India’s total population will be equal to China’s population, thus making India the world’s most populated country. In the year 1961, the information available on the annual market supply for almost all countries in world and production of agricultural commodities. In the western world, agriculture, transport and protect food in the technological development at the end of the 19th century led to the expansion of the food industry and food preparation shifted from households to industry, so stimulating the nutrition transition. Worldwide it has been noted that water shortage reflects in the per capita decline and also in irrigation for the production of food. Also because of the population increase and also increased pollution the Ozone layer is getting depleted and is causing global warming and which will be the major cause plant and human disease. So it is needed that the pollution should be as low as possible.

It is also needed in future that the global food production should be increased by adopting new and innovative and mechanized method for production and cultivation of crop.

Johansen , B . E. (NO) The relationship of Green house and Ozone Depletion