HDFC bank was founded in august 1994. It was among the first companies to receive an ‘in principle’ approval from the Reserve Bank of India (RBI) to set up a branch in the private sector. The bank operated as a commercial bank under the liberalization policies of RBI. In February 2000, this bank experienced a merger with Times Bank owned by The Times Group (Bennett Coleman & co.). This was the first merger between two private banks in India. 1 share of HDFC Bank was received by shareholder of Times bank for every 5.75 shares of their own.

HDFC Bank Limited provides banking as well as various financial services to different corporations, and middle & upper income customers in India. The bank operates through three main divisions which are wholesale banking, retail banking, and treasury operations. HDFC also provides services like credit cards, debit cards, third party distribution, investment advisory services, card and automated teller machine (ATM) acquiring transactions, and depositary services. Foreign exchange and derivative products is provided by the treasury division. The bank also provides telephone banking, Net Banking, Internet banking, and mobile telephone banking services.It is the largest bank in India by market capitalization as of 24 February 2014. On January 2 2014, the market cap value of HDFC was found to be USD 27.00B, as compared to the credit Suisse group with USD 48.00B. It was promoted by the housing development finance corporation, a premier housing finance company of India set up in 1977.

Some of the latest achievement of HDFC bank are:

Exploratory design has been selected as data has been collected from questionnaire as well as direct contact to understand the satisfaction level of the customer and to study the areas in which these customers prefer to invest their money.

Most of the data has collected from secondary sources whereas for conduct of research the primary data has been collected through a structured questionnaire wherein a total of 120 respondents took part out of which only 100 have been taken into consideration inorder to reduce the error. This data collected is from Noida region only and has been collected according to the convenience of the researcher.

The study mainly deals with the satisfaction of the customer in Noida, Uttar Pradesh, India. The required data was collected through a pretested questionnaire administered on a combination of convenience andjudgment sample of 100 individual investors. Judgment sample selection isdue to the time. Respondents were screened and inclusion was purely on the basis of their knowledge about financial organizations, HDFC in particular. This was necessary, because the questionnaire presumed awareness of some basic terminology used in these organizations. The purpose of the survey was to understand where the interest of the customer lies when investing in these organizations depending on various like satisfaction, awareness level. Sample of the questionnaire is given in Annex. A.

The primary data was collected through a structured questionnaire by interactions with investors through telephone and through emails.

After the data collection, it was compiled, classified and tabulated manually with the help of the computer.

The survey was conducted to see whether the customers are happy with the service provided by the bank. The study is given below

Interpretation: the bank should focus on its ability to perform well consistently and increase responsiveness to attract more customers.

The survey was conducted to capture investor objective for investment in financial instruments, reveals the following. 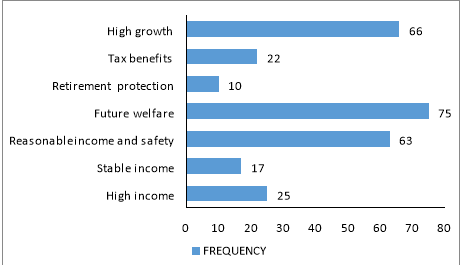 Most of the investors invest money for the purpose of future welfare followed by high growth, so company should suggest those instruments which have a positive return for their investment which will help in fulfilling both the objectives.

Customers were asked about the reasons because of which they became a part of this organization, the study showed a following results. 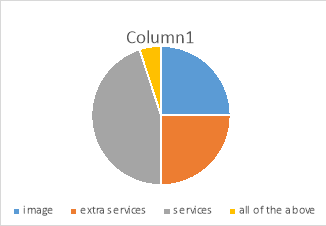 This was done to get an idea of the service most liked/preferred by the customers. The result showed, 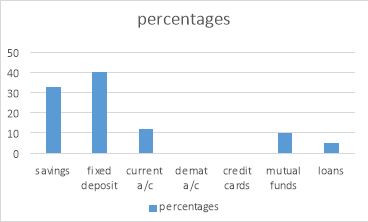 According to the results, the customers find fixed deposit to be the best service provided, followed by savings and currents a/c. not even a single customer opted for demat a/c or credit cards.

The customers were given three choices and the result was recorded to know the problems with the services and how to solve them in order to provide better services from the next time. 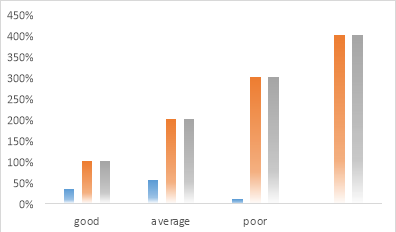 Dealing with the customer plays an important role in the organization and to check it, a report has been made. The results show,

The pie charts shows that maximum customers were satisfied by the dealing to some extend whereas 30% were completely satisfied. Only 25% were not satisfied and asked to make appropriate changes. 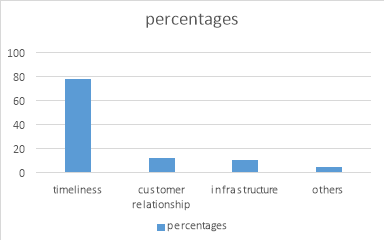 Most of the customers face a problem with the timeliness (78%), whereas only 12 % and 10% people face problems with customer relationship and infrastructure respectively. 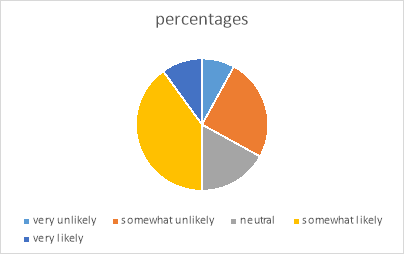 According to the result, around 40% of the people agreed to recommend this bank to their friends whereas 25 refused to do so.

The result shows perfectly that the customers found the service to be average in terms of customer relations. 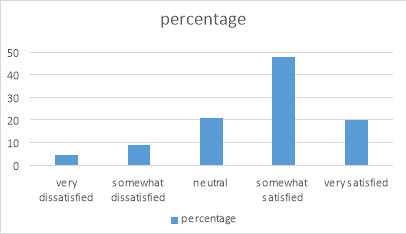 Review from customers show that 48% are somewhat satisfied whereas 21 percent are neutral about the satisfaction level. Only 2% and 9% customer were very and somewhat dissatisfied respectively.

At the end I would like to conclude by saying that the Indian banking market is growing at an astonishing rate. HDFC bank have a network of 1142 branches and 3295 automated teller machines in 528 cities in India. The majority of customers are satisfied but the bank should target the unsatisfied customers. Even though the customers are aware about the services, the bank should try to create more awareness among people. HDFC should use printing as well as other media to do so. Formalities should be reduced to a minimum level as the customers feel irritated and the whole process becomes a burden on them.