Honey Bee (Apis mellifera) numbers have declined significantly in recent years and there are numerous theories as to why. One of the fore runners is the emergence of Colony Collapse Disorder (CCD), which is: “an unsolved decline in honey bees from parts of the United States, Europe, and Asia” (Evans and Schwarz 2011). Even though a comprehensive idea of what causes Colony Collapse Disorder has yet to surface, this hard work has led to new microbial discoveries and possible channels in which our understanding of honey bees and the challenges they face can improve (Evans and Schwarz 2011). However, despite concerns about pollinator declines and a global pollinator crisis long-term data on the status of bee populations are scarce (Winfree 2010).

Here the known honey bee microbes and their effects are reviewed and areas of both active and lagging research are highlighted. Areas of lagging research will be chosen on the amount of focus the research community gives it.

Research has indicated that detailed studies of honey bee–pathogen interactions will aid in keeping this crucial pollinator healthy and productive. These studies will also give generic insights into both beneficial and harmful microbes that are confronting colonies todat. (Evans and Schwarz 2011).

A statistical overview of the decline of the Honey Bee population.

Research conducted by the National Research Council in 2007 concluded that in 60 years number of colonies dropped from 6 million to 2 million in the U.S which equates to 66.6% decrease (Figure 1). A further study conducted in Europe found that honey bee colonies declined 16% between 1985 and 1991. (Millennium Ecosystem Assessment Board 2005). These two studies, while conducted over differing time period and at difference locations show the downward trend in Honey Bee populations that has spiked the need for research into this area.

The figure below demonstrates a deteriorating trend of U.S. honey bee colony populations from 1945 to 2005. Scientists attribute much of this decline to newly introduced parasites and antibiotic-resistant pathogens and microbes (National Research Council 2007). 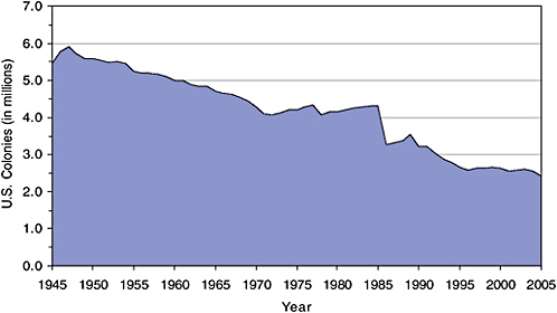 During the years surrounding 1978 and 1982 there was much research surrounding DNA viruses and Mollicute bacteria being the cause for the population decline if the Honey Bee. Mollicute bacteria are a class of bacteria distinguished by the absence of a cell wall (Brown and Bradbury 2014). Early studies have shown that adult honey bees are parasitized by two species of mollicute bacteria, Spiroplasma apis (Mouches 1982) and Spiroplasma melliferum (Clark 1985). Early research has also shown that although RNA viruses are in the marjority in honey bees, DNA viruses have sporadically been reported to be present (Clarke 1978). These findings were backed up by a recent proteomic fingerprinting analysis carried out by Bromenshenk (2010) which concluded that “a ubiquitous iridovirus in U.S. Honey Bees is associated with CCD”. However, these results were later challenged on methodological grounds which showed that diverse sequencing efforts have yet to find widespread DNA viruses in Honey Bees (Foster 2011).

Early research into mollicute bacteria was largely done by Clarke (1978) and Mouches (1982) who identified the two types of mollicute bacteria that are common amoungst adult Honey Bees, Spiroplasma apis and Spiroplasma melliferum. They found that pathogenesis occurs when these bacteria invade the hemolymoph by breaching the gut barrier. This causes a systemic infection within the Honey Bee this leading to a fatal death by May disease and spiroplasmosis (Clark 1985); (Mouches 1982).

Research into mollicute bacteria by Clarke (1978) and Mouches (1982) further found the spiroplama infections are much more difficult to recognise and diagnose than foulbrood diseases. Foulbrood diseases are caused by spore- forming larvae. The most common and destructive of the bee brood diseases is the America Foulbrood disease which is caused by Paenibacillus larvae (Wiley-Blackwell 2008). Paenibacillus larvae are rod-shaped bacteria and are only visible under a high power microscope (Wiley-Blackwell 2008). This therefore hinders the ability to monitor mollicute abundance and their impact on the beekeeping industry.

Current research performed by Runckel (2011) has focused on the seasonal abundance of mollicute bacteria in Honey Bee colonies thus ensuring they are still interesting targets for study. Clarke (1982) found that mollicutes are seasonal due to their tie to the flowering cycles of specific plants that act as transmission sites.

In comparison to early research, current research focuses largely on RNA viruses mainly from the Dicistroviridae and Iflaviridae families. Nearly twenty of these positive-strand RNA viruses have been found to be carried by Honey Bees (Runckel 2011). Researchers such as Genersch and Aubert (2010) and vanEngelsdorp(2009) found that these viruses affect the behaviour, morphology and physiology of honey bees and have been recently widely associated with weak and dying colonies.

There is often cross over between early and current research. For example, following the identification as two Spiroplasma strains in the 1980’s, Regessa and Gasparich (2006) recently identified a number Spiroplasma strains as the cause of several disease outbreaks in aquaculture, in particular in crustaceans. This suggests that the virulence of these particular bacteria may be associated with a vast number of stressful environmental surroundings and hosts. These could therefore be related to the Honey Bee and a similar hypothesis formed given the stressful environmental circumstances they often face.

There are many reasons for the differing results from this selection of papers, both historic and current. The main explanation for this difference is down to the advancements in molecular and microbial technology have been enormous over the past fifty years meaning that the rate of discovery of new factors and hence disproval of old factors is vast.

Impact of honey bee decline on the wider ecological community

Pollination is an essential part of an ecosystem functioning as according to research by Ollerton, Winfree and Tarrant (2011) showed that 87% of the world’s angipserm species are pollinated by animals including the leading global food crops. Further research by Winfree, Bartomeous and Cariveau (2011) showed Honey Bees to be regarded as the most important pollinaors due to both their ubiquity and their efficiency.

There are many different records of the number of crops that Honey Bees pollinate. According to UN estimates, of the 100 crop species that are responsible for providing 90% of the world’s food, 71 are dependent on Honey Bee pollination. However the national research council (2007) states that honey bees enable the production of no fewer than 90 commercially grown crops. There is however one piece of data which is consistent across all research which is that 90% of the world’s nutirtion is pollunated by bees. (National Research Council 2007);(United Nations 2010)

When looking at the financial implications of this decline research throws up many difference values. In a report by the United Nations in 2010 on the “Global Honey Bee Colony Disorder and Other Threats to Insect Pollinators” states that the financial implications of this population decline are difficult to pinpoint. However they have stated that pollination is worth between $37bn and $91bn with honey bees making up 90% of this. This value is thrown into question by the European Commissioner for Health and Consumer Policy as they calculated the in European agriculture the honey bee contributes to $30bn annually and worldwide they pollinate human food valued at over $360bn.

Areas of Research that is lacking

There are numerous areas lacking research when looking at the decline of the honey bee. As stated above areas lacking research is determined by the level at attention paid to it by leading researchers in the field. This information is found through literature searches on both these areas and on leading researchers in this field. Firstly, a more up-to-date statistical analysis is needed on both the decline itself and the effect this has on the wider ecological community.

For various reasons, protists, three in particular, that are infecting honey bees have been largely ignored by researchers for some time. There are multiple reasons for this and these include: lack of obvious pathology and low detectability via microscopy, difficulty in culturing, and absence of genetic markers. Protists are, as described by the biological encyclopedia“a kingdomof simple eukaryotic organisms, usually composed of a single cell or a colony of similar cells.” They live in mostly wet habitats and also asparasites in the bodies of multicellular eukaroytes (Encyclopedia 2013). In the future this area should prove to be areas of significantly increased knowledge in the near future. The three protists in question are: Trypanosomes, Gregarines and Amoeba.

The current role of Trypanosomes in honey bee health is unclear. They have been well documented from A. melliferagloballywith strong seasonal and regional variation in prevalence(Wallace 1966). A description of the type strain isolate,Crithidia mellificae(Landridge and Barclay-McGhee 1967), together with that of a new isolate would, in the future, provide a more complex understanding of the function which this parasite plays in honey bee health. (Runckel 2011).

Gregarines are a varied collection of apicomplexan protists that parasitize many invertebrates such as the honey bee, which can endure brief life spans and colony loss(Stejskal 1965). Once ingested, gregarines have intricate life cycles in the intestines where they asexually reproduce and differentiate into trophozoites. It is known that colonies in tropical climates are more susceptible to gregarines(Stejskal 1965). However, little else is known about honey bee gregarines in terms of their seasonality, virulence and genetics as well as their biogeography (Stejskal 1965).

The amoebaMalpighamoeba mellificae(Prell 1926) is known to contaminate mature honey bees in temperate to tropical regions (Stejskal 1966). Ingested cysts develop into trophozoites and infect the Malpighian tubules. Related with the diminishing of bee colonies,M. mellificaeis also concurrent with dysentery symptoms in mature honey bees and the predisposition of contaminated honey bees to vanish without explanation from the hive(Prell 1926). Genetic markers are at this time deficient forM. mellificae, and this therefore restricts more sensitive classification through the use of modern molecular techniques.

As seen by the very early dates of the research used in the section above it can be said that research in this area is lacking substantially both in funding and in general attention. Therefore, more current, relevant research is needed to give a balanced and accurate view of the role protists play in the decline of honey bee populations.

Finally one of the key areas where research is lacking is the cause of CCD. As yet there is no concrete cause, determined by research, for colony collapse disorder. Many research papers have talked about the causes of CCD however each seems to have a different explanation for the spontaneous abandonment of their hives by honeybees.

Honey bees contribute a lot of crucial pollination services to the world, providing 90% of the world’s nutrition. As their numbers are dropping at an alarming rate this therefore justifies current efforts to comprehend and enhance their exchanges with harmful and beneficial microbes and other threats.

Honey bees face a varied pathosphere and their capacity to defend against these threats depends upon: genetically based mechanisms that aid in resistance and tolerance, nutritional status and the build up of harmful and potentially toxic compounds. Even though the pathology of the honey bee has been a field of study for many years, numerous questions still remain concerning the effect of microbes upon bee health.

Due to huge advancements in molecular technology the genome sequences for primary honey bee pathogens are now available. The models used to explore host-pathogen relationships in honey bees are being changed due to the new, refined tools used for the genotyping and quantification of these relationships.

New tools, including improved microscopy, and reverse genetics of bee pathogensenable more accurate experiments involving diseases that affect honey bees and the population decline of the honey bee. These tools also alleviate the drawbacks of working with an organism for which genetic lineages are difficult to produce and preserve.