We all know that UAE is located in the desert where there is only limited sources of underground water, little rain and no rivers. This is the main problem that UAE government facing today having water shortage. That’s why UAE rely in some water sources like desalination of sea water, Groundwater, Surface water and treatment of water. UAE is one of the biggest and populous countries that’s why people in the house, office, factories are the high consumption of water and the farmers in their farms is the main reason of water shortage.

The main objective of UAE why they still doing some experimentations and project about groundwater resources in Emirates is to determining the quality, deeper and volume in issuing some recommendations on how they will protect them in sustaining in a long term, because now a day’s water resources is one of the main problem in all countries and ground water in UAE is mostly use in agriculture.

With Abu Dhabi Emirates current Annual water use twenty six times larger than its annually renewable natural water resources, there is an urgent need for implementation of programmes and projects to improve water management and rationalize water use in all sectors. An Analysis of all water produced shows that the vast majority (79%) is groundwater abstracted from boreholes and shallow hand. This research talks about the groundwater resources and water management issues with the various groundwater sector users in UAE.

Water is considered an important issue in one country. Civilizations are established near water sources. The unavailability of water resources is one of the problem in Arab Countries especially in United Arab Emirates, it affects the lives and livelihood of inhabitants. Groundwater is one of the main sources of water in UAE. The scarcity of water in UAE is approaching in the level of the rapid increase of populations. Groundwater is the traditional sources of water where they mostly use in agriculture purposes and desalination process use to supply Non-agricultural. UAE mostly use 68% of water for agriculture, 23% for domestic usage and 9% for industrial. Some researchers do some investigations and programs for groundwater in UAE. USGS has been partnering with the National Drilling Company (NDC) of Abu Dhabi to collect information on the groundwater resources in UAE. Crops in Abu Dhabi are mostly grown in sand and highly irrigated and fertilized. Some sectors do some investigations about the impact of farming practices on the quality of the Emirates groundwater resources. Abu Dhabi is one of the richest emirates swallow around 550 liters of water per day by per person which is comparatively quite more as compare to other countries in the world.UAE government incurs lot of money on the energy cost as desalination plants are set up in order to provide fresh water.

Groundwater in the UAE is fast depleting because of prolonged drought conditions. About 80,000 wells including 13,000 in Abu Dhabi and 12,000 in Sharjah are at the risk of depletion and comprise high salinity, according to a scientific study conducted by the UAE University. About 40% of wells in Fujairah and other Eastern Region are so affected.

Groundwater refers to all subsurface water. It is refers to the sources of water where we can saturates in the pores and fractures of sand, gravel and rock formations. Groundwater is a major source of water foragriculturaland industrial purposes, and is an important source of drinking water for many people around the world. Today, the supply of groundwater is facing increasing pressures. As the government authority mandated with the protection of the environment in the Emirate, one of EAD’s priorities is to conserve Abu Dhabi’s groundwater resources to help ensure the protection of this strategic resource. Some water underlies the Earth’s surface almost everywhere, beneath hills, mountains, plains, anddeserts. It is not always accessible, or fresh enough for use without treatment, and it’s sometimes difficult to locate or to measure and describe. This water may occur close to the land surface, as in a wetland, or it may lie many hundreds of feet below the surface, as in some arid regions.

Groundwater is stored in, and moves slowly through, layers of soil, sand and rocks called aquifers. Aquifers typically consist of gravel, sand, sandstone, or fractured rock. These materials are permeable because they have large connected spaces that allow water to flow through. The speed at which groundwater flows depends on the size of the spaces in the soil or rock and how well the spaces are connected. The area where water fills the aquifer is called the saturated zone. The top of this zone is called the water table, which may be located only a foot below the ground’s surface or it can sit hundreds of feet down.

Almost 90% of groundwater in Abu Dhabi is salty, in some cases more than 8 times as far as seawater. There are two kind of freshwater aquifers . Per year the Natural groundwater recharge is estimated at about 300 million cubic meters. In addition, the most of time groundwater used for irrigation of date palms which are relatively salt-tolerant. They built Recharge dams built onwadisin order to stop flood water to push into the sea, to recharging it instead of aquifers.

UAE use synthetic groundwater recharge with desalinated seawater has been testing in 2003 near the Liwa Oasis and buildup of large-scale recharge facilities has start in 2008. Their goal is to excelled a 90-day lock instead of the current 48-hour reserve for drinking water provide, in order to secure the UAE against risk of oil spills that will shut down the full of water supply. Recharge will happen during summer while the desalination plants obstetrics excess freshwater.

The research study took place in Abu Dhabi and analysis was done using the percentages. This percentage was the main points of the statistical techniques that were used to analyze the data that has been collected.

To increase thegroundwaterrecharge a dams is built at different places across the country. There are about 35 dams and embankments of various dimension having a total storage capacity of 80 million. However, a lot of these dams are essentially built to recharge goal, they also provide security against damage caused by flash floods. The UAE has very limited potential foragriculturaldevelopment since over 90% is desert , in the desert there are no perennial surfacewater resourcesandrainfallis meager and unorganized. Although, climatic conditions andsoiland water constraints. All irrigation water isgroundwater.

Figure 1 : Sources and Users of Water in UAE 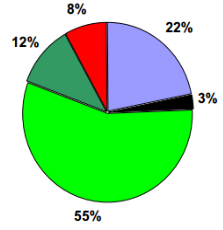 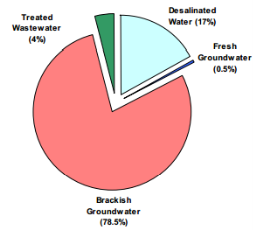 It shows in Figure 1 that out of 100% almost 78.5% of water sources are from Groundwater and the remaining 29% are from the other resources like fresh water, desalination of water and treated water. It also shows that the Agriculture sector is most usable sector of groundwater rather that domestic and Industry.

Abu Dhabi Emirate, one of the seven Emirates which comprise the United Arab Emirates (UAE), occupies an area of 67,340 km², or about 80% of the total area of UAE. As the UAE progressed, many industries and steel plants also cropped up, which added pressure on the reserve, not only industries affect the shortage of water in UAE also people and specially the high usage of Agriculture sectors. It shows in my reports that almost 80% of the water in UAE are from the Groundwater and they use this specially for the irrigations or farming. But they have some process that they planning so that they can protect the groundwater and helps in reducing the water shortage problems. they are planning that all Agriculture and other activities reliant on water should be located in an areas that have long term and sustainable sources of water, whether groundwater or recycled water.Government entities are already implementing new solutions to minimize water use in the agriculture sector and public spaces. In the UAE during 2012, the area of soil-less agricultural production increased by 12% thanks to glasshouses and the use of hydroponics.

Water renewal is less than 4% annually, which is a major challenge for the agricultural sectorin Abu Dhabi, especially as rainfall does not exceed 100 mm per years. Abu Dhabi Food Control Authority (ADFCA) has warned of water shortage in 50 years if consumption by agricultural in the UAE continues at this pace without steps taken to conserve groundwater. About 95% farmers in Abu Dhabi depends on well water, while fresh water does not exceed at least 1% and not to mention the high rates of nitrates in the wells.