The key differences between Positivism and Interpretivism (Social Constructionism) are highlighted in the table below by (Ramanathan, 2008). 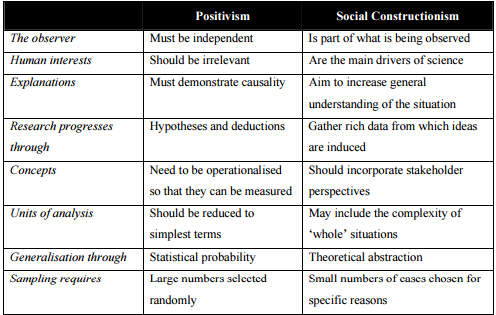 Saunders, Lewis and Thornhill (2003) state that
“Realism is applied to the study of human subjects, recognizing the importance of understanding people’s socially constructed interpretation and meaning, or subjective reality, within the context of seeking to understand broader social forces, structures or processes that influence, and perhaps constrain, the nature of people’s views and behaviours”.
According to Saunders, Lewis and Thornhill (2003), it will be misleading to think of any research philosophy as better than the next. Ultimately, all three philosophies serve different purposes depending on the objective of the research. Nonetheless, business situations such as shareholder activism are complex and unique to different individual’s circumstances and environment. Shareholder activism in Nigeria cannot be discussed without addressing the corporate governance environment of the country. According to Grienenberger (1995),
“Corporate governance can be defined as the legal and practical system for the exercise of power and control in the conduct of the businessof a corporation, including in particular the relationships amongst the shareholders, the management, the board of the directors and its committees, and other constituencies.”
This definition highlights two things that are very important. This is the fact that this is a legal and practical system. Every country has it’s own legal system that may derive its origin from many things such as the country which it was colonized by to the general way of life of the people. This in fact is the same for how business is conducted as well. Therefore, it is without doubt that an understanding of the country’s systems and the way in which things are done is essential for any well informed analysis to be made. This has therefore led me to choose interpretivism/social constructionism as my research philosophy as I believe that the characteristics of this philosophy such as aiming to increase the general understanding of the situation, gathering rich information from which ideas are induced and including stakeholder perspectives are all exactly the approaches I need to undertake in order to appropriately understand all the drivers involved in shaping shareholder activism in a developing country such as Nigeria.
4.3 Research Approach
When considering what research approach to use in research, there are two theories available. These are: Deduction (Testing theory) and Induction (Building theory).
Deduction approach as the name implies involves the researcher having a proposed theory (usually involving two or more variables) which they then collect data against, analyse and draw conclusions in support of or opposing the original thesis (DeGracia et al., 2014).
Induction approach on the other hand involves observing different cases or scenarios and then developing a general hypothesis around one’s findings (DeGracia et al., 2014). This approach allows for a less rigid methodology and openness to varying explanations of what is going on (Saunders, Lewis and Thornhill, 2003).
The table below shows the differences between Deduction and Induction approaches to Research by (Saunders, Lewis and Thornhill, 2003).

The induction approach will be taken as this research looks into human behaviours and social construct within a certain environment. Furthermore, I will be making use of qualitative data alone to suit the approach adopted by Saunders, Lewis and Thornhill, (2003). This is because my research is looking into the problems associated with the lack of effectiveness of shareholder activism in Nigeria. This means that I am looking into the issues surrounding application, human behavior towards corporate governance and shareholder activism. Therefore, the induction approach as well as the use of qualitative data is the best way to get the different stakeholder perspectives and gather the right information within a less rigid structure that will enable the appropriate analysis to be conducted.
4.4 Research Strategy
According to Saunders, Lewis and Thornhill, (2003), there are different research strategies namely:

For the purpose of this research, grounded theory will be used. This is because it is mainly used in the inductive approach and will allow for a more thorough insight into the issues associated with the objectives set in this research by using interviews (Corbin and Strauss, 1990). My source of data will be interviews and archival records as it allows me to capture insights into events associated with shareholder activism through the personal accounts of individual’s experiences (Hendry et all., 2007; Useem et al., 1993). As this research paper is focused on Nigeria, I have limited access to data as I am currently in the United Kingdom. Therefore, I have conducted telephone interviews with seasoned individuals practicing shareholder activism because it was more cost and time efficient to do so. I believe using these will give me a well-rounded view of the issues that need to be identified.

4.5 Time Horizons
There are two types of time horizons focused on by Saunders, Lewis and Thornhill, (2003) namely Cross-sectional studies and longitudinal studies. Cross- sectional studies have to do with research on a particular hypothesis at a particular time, while longitudinal studies involve researching a certain phenomenon over an extended period of time. This research focuses on Shareholder Activism in Nigeria, over the years there has been very little written on this subject matter. My aim is to add to the body of knowledge which exists in current times. In this case, I will be applying cross-sectional studies and focusing on the periods from the early 2010 to present day 2016.
4.6 Data Collection
The main research method in this paper will be the interviews conducted with persons that are knowledgeable on the subject. As I am not very conversant with the subject matter, speaking with these people will aid in expanding my knowledge. It is quite expensive to travel to Nigeria from the United Kingdom therefore, telephone interviews will be conducted as it will save time and costs. I also plan on using archival records as I believe this will provide context to my research thus allowing me to form a well-rounded grounded theory.
4.7 Data Analysis
Various solid articles and books will be used to aid in my coding and analysis of the interviews conducted as well as the use of the appropriate archival records.