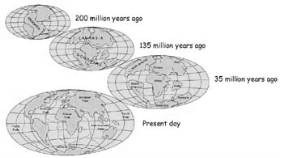 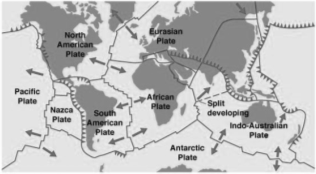 “Compare and Contrast the Topographical Features at Divergent and Convergent Plate Margins.”

According to the United States Geological Survey (USGS) “a tectonic plate (also called lithospheric plate) is a massive, irregularly shaped slab of solid rock, generally composed of both continental and oceanic lithosphere.”[1] There are two types of plates; Oceanic plates are younger crustal plates with a thickness of 5-9km of mainly basaltic composition and Continental plates are older crustal plates with thickness of 25-90Km of mainly granite composition. The area where two of these plates meet is referred to as a plate boundary. Plate tectonics is a recent theory developed around the late 1960’s from two pre-existing theories; Continental Drift by Alfred Wegener and Seafloor Spreading by Harry Hess. It suggests that the Earth is made up of eight large rigid and thick plates along with smaller ones as shown in Diagram 1 that move slowly and change size. 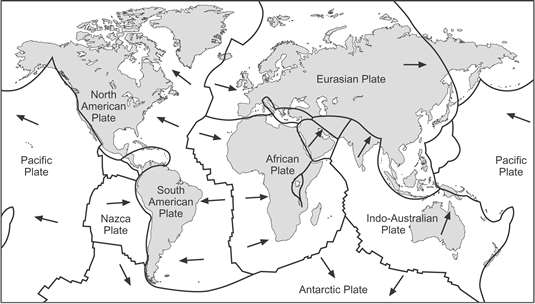 Plate tectonics has three types of plate margins or boundaries named accordingly by the type of movement; towards, away and parallel that occurs at these boundaries. They are Convergent, Divergent and Transform plate margins respectively. Due to these movements, associated landforms altering the world’s topography are created except for at Transform plate margins because the parallel movement of plates only causes the release of energy in the form of earthquakes. The aim of this essay is to compare and contrast the topographical features that occur at the Divergent and Convergent plate margins.

It is imperative to know what topographical features both these plate margins produce in common at the forefront. Therefore as the discussion goes in depth as to how they are created by different processes, keeping in mind the vision of the end product which is of the same topography will enhance clarity and comprehension. The topographical features that both plate margins produce in common are volcanoes and mountain ranges. A volcano is a mountain like feature that has a vent in which lava, tephra and hot gases are expelled. A mountain range is an area of a series of mountains that are geologically related. Therefore, having established this each plate margin can be dealt with individually.

Convergent plate margin also called Destructive plate margin occurs at a fault where two tectonic plates move towards each other. Due to the nature of the plates involved there can either be subduction in which the area is called a Subduction Zone or a collision in which it is referred to as Collision Zone. Density is the key factor that determines the end result of the plates involved.

In the case where the plates moving towards each other are continental and oceanic such as the Indo- Austrlian and Pacific plates respectively. Oceanic plates although having a thickness of 5-9km as compared to continental’s thickness of 25-90km is denser. Hence when an impact occurs as illustrated in Diagram 2 the Oceanic plate subducts under the Continental plate into the mantle and is reabsorbed due to intense heat and pressure. The area at which this occurs is the Subduction Zone. 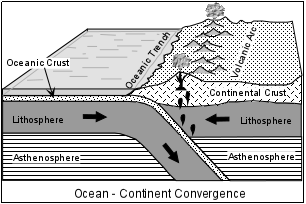 Lines of weakness referred to as faults can occur within the Continental plate during subduction. As the Oceanic plate subsides water is being taken along with it which produces steam. This build-up of steam adds to the pressure which then forces its way through the faults and allows for magma to erupt violently (referred to as lava when it reaches the Earth’s surface). The lava solidifies due to the cooler surrounding temperatures and forms volcanoes. A chain of these volcanoes is known as the Volcanic Arc. In the example of the plates given, this was how the Cascade Range in North America which is a part of the famously known Pacific Ring of Fire was formed. The frequency of eruptions and viscosity of lava will affect the height and gradient of these volcanoes. Therefore if the lava is less viscous it will run further distances away from the point of origin and create gentler gradients but if the lava is more viscous it will not flow as easily and solidifies at shorter distances allowing a faster accumulation.

In addition to this scenario we can have the case in which the plates involved at a Convergent plate margin are both Oceanic. The same principle will apply and the denser of the Oceanic plates will subduct. The features produced will have the same general high relief however they are referred to as Island Arc. An example of such is the Japanese Islands where the Pacific and Philippine plates interact. The difference of names is understood if Diagram 2 and Diagram 3 are compared. The volcanoes formed in Diagram 3 are protruding from the Oceanic crust hence the Island (body of small land surrounded by water) term while in Diagram 2 the volcanoes formed protrudes from the continental plate hence the arc is just referred to as volcanic. 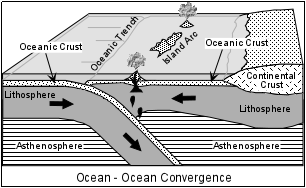 Volcanoes or volcanic activity are produced at Divergent plate margins regardless of the type of plates involved. When the plates move apart a gap is created which allows the magma to expel and the lava solidifies due to the same conditions as previously mentioned under Oceanic to Oceanic and Oceanic to Continental convergence. Mid ocean ridges are the dominant features formed however within these ridges are the under -water volcanoes. The ridge is indicated in Diagram 4 at the centre where it is labelled. Although the diagram gives the simplicity of an ocean ridge as two parallel lines, in actuality this ocean ridge is an extensive submarine mountain range. 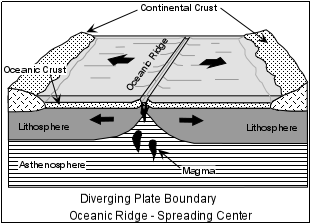 The previous point introduces our second common feature, mountain ranges. At the Divergent plate margin the mid oceanic ridge would represent this submarine mountain range. Similarly at Convergent plate margins where Fold Mountains are formed this will represent the mountain ranges as well. These Fold Mountains are formed when two Continental plates travel towards each other. For example Eurasian and Indian plates which will have relatively the same densities. They will collide and fold by compressional forces forming these ranges. This is illustrated in Diagram 5 in which the Continental plate on the right is buckling having collided with the Continental plate on the left thus producing the peaks along the centre of the diagram which represents the mountain range. 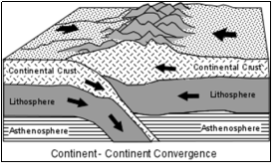 With the example of the Continental plates given the Himalayas Mountain Range was formed with peaks of over 8,000 meters in height above sea level.

On the contrary, there are differences between the topographical features of a Convergent and Divergent plate margin. These are Rift Valleys and Ocean Trenches created by divergence and convergence respectively. Rift valleys occur when faults lie at a 120 degrees angle within a Continental plate. When the plates move apart either one of the two scenarios occurs. Scenario one is the pull leaves a segment of the of the Continental plate in the centre which falls below referred to as grabenas illustrated in Diagram 6 of the two opposite sides referred to as Horst in the same diagram creating a steep sided narrow valley. 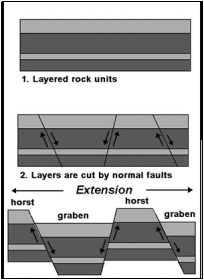 Diagram 6 showing the formation of a Rift Valley

However, in scenario two instead of the centre segment falling, the lands on either side of the segment can rise due to a release in pressure. Overtime the said segment will reach to a point where it is below sea level causing the land mass to break away from the parent continent and creating a new ocean basin. A perfect illustration of this occurrence is the Great African Rift Valley. Diagram 7 indicates the zone of rifting which runs from Afar Triple Junction to South Mozambique and also offshore of the coast of Mozambique along the Kerimba and Lacerda grabens. Eventually the Somalian plate to the east will be completely separated from the Nubian plate on the west. 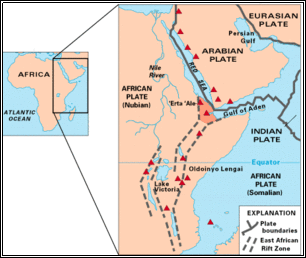 Diagram 7 showing the location of the Great African Rift Valley

Lastly is the ocean trenches formed at subduction zones of Convergent plate margins. According to Merriam Webster online dictionary an ocean trench is “a long, narrow, deep depression in the ocean bed, typically running parallel to a plate boundary and marking a subduction zone.” The steepness of the trench is reliant on the angle at which it is subducted. The movement and location of an ocean trench is illustrated in Diagrams 2 and 3. Diagram 8 gives a three dimensional view of Puerto Rico’s oceanic trench formed at the Caribbean and North America plate boundary. 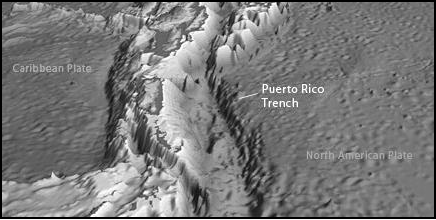 In summary the Divergent and Convergent plate margins have similar and different topographical features that would have been formed or is still forming as a result of tectonic plate movement. The similarities are volcanoes and mountain ranges while the differences are rift valleys and ocean trenches.

“Japan in a subduction zone.”Introduction in the Landforms and Geology of Japan. http://www.glgarcs.net/intro/subduction_2.html (accessed October1, 2014).