THE EFFECTIVENESS OF PARA-TRANSIT TRANSPORT SERVICES IN NIGERIAN TOWNS: THE CASE OF MOTORCYCLE TRANSPORT IN ABRAKA

The thrust of this article is on the desirability of motorcycles in Abraka region as a means of para-transit transportation. The paper examines the existing mode of para-transportation in Abraka region, and discovers that commuters in Abraka region are increasingly patronizing motorcycles as a mode of transport. Also, with the poor conditions of roads in Abraka, most parts of Abraka are denied access to public transport services. In the light of this, a vast number of commuters have now resorted to the services of motorcycle transport in spite of the social risks and incessant cases of accidents associated with this mode of transport. This study discovers through Pearson’s Product Moment correlation coefficient analysis that there is a high significant relationship between the standard of living of cyclists and motorcycle business in the study area. The paper ends by highlighting issues, which should be incorporated in a comprehensive urban transport policy to make motorcycle transport safe and efficient as a para-transit mode of transport in Abraka region.

The need for an efficient public transport service to cater for the demands of urban commuters cannot be overstressed. Public transport systems are more efficient means of transporting large numbers of people between and within settlements than private cars (Adeniji, 1983).

Para-transit modes of transport in developed countries include such systems as car pools, rental cars, specialized commuter bus services provided on a subscription basis, as well as taxi cab related services like dial-a-bus and motorcycles. In the less developed countries, para-transit modes are usually referred to as intermediate modes of public transport. They include the shared taxi cab, mini buses, modified vehicles such as the jeepneys of Manila in the Philippines (Grava, 1977), silos of Chien Mai in Thailand (Fourcare and Manundes, 1977), Molue of Lagos in Nigeria (Olayemi, 1979), Beenos of Surabaya in Indonesia (Fouracre and Manuder, 1978), the cycle rickshaws community found in most Asian cities (Jacob and Fouracre, 1976) and “Going” in Nigerian Towns, (Okoko, 1990).

In recent years, the prohibitive prices of brand new cars and buses have resulted in the reduction of the number of private cars and commercial vehicles generally on our urban roads. Even the fairly used imported cars and buses (Tukunbo) are beyond the reach of the majority of our people. As a result of these factors, there has been a tremendous demand for public transport in our towns in recent years. It is now a common sight to see hundreds of passengers at bus stations or along road sides waiting for hours for the few buses and taxis on the road (Okoko, 1998),

This scenario has necessitated the introduction of motorcycles as a means of para-transit transport in Nigeria towns. It first gained prominence in the Cross River State the l970s where it was variously referred to as “Aka-Uke” or “Ala-Olok”. This mode has now diffused to other Nigeria towns including Lagos and Abuja. It is now the dominant mode of transport in most of our urban centres e.g. Uyo Calabar, Nasarawa etc. It is variously referred to “Okada” in the Mid-West belt regions of Nigeria and “Abacha” in Northern Nigeria.

The motorcycle mode has had the advantage of flexibility and door-to-door service especially in towns where the road network does not permit an efficient operation of taxi service. The major problem associated with it is the high number of accident cases often resulting in the death of both the cyclist and the passenger or commuter.

Table 1, shows some para-transit modes and their relative performance characteristics. Most of these modes are very popular in Asian and Latin American countries where they are employed both in rural and urban areas. These modes are recommended for use in our towns and rural areas where conventional mass transit facilities are inadequate. In rural areas where the population is less than 50,000, privately operated para-transit modes are adequate. In settlements where the population is between 50,000-100,000 para-transit and privately operated omnibuses are adequate. Mass transit public transport services are recommended for settlements with a population size of over 100,000 inhabitants (Adeniji, 1986).

In recent years, with the aid of motorcycling, Abraka community has experienced an unprecedented general economic boom, which has encouraged the increased diversification of local industries and commercial activities.

Atubi and Onokala (2004b) stated that “in human geography, one of the most fundamental themes is spatial interaction. That spatial interaction involves the movement of goods and services and people between various centres in space. In general, when constructing or improving a road network where economic constraints apply, they said, the most economical solution for one road link may not necessarily be the best solution for the network as a whole. That the cost of implementing one project to high standards may consume resources that would be better spent over the whole network, or in filling other gaps in the network with lower standard roads”.

The influence of political policies on the transport facilities in metropolitan Lagos was also examined by Sada (1970) where he maintained that politics had more than desired influence on the city network and this is irrational to objective planning of transport network in such a large city. He further said that until the city was given a new dimension such as planning and reversing same existing policies, the problems of traffic in Lagos would still continue to be in existence.

Furthermore, for any meaningful division of labour and specialization in production process to take place in any society such as Abraka, there must be an efficient and effective means of transport (Atubi and Onokala, 2004a). The various feeder roads and paths are constructed to connect the interior parts of the region and this gives room or serve as an advantage to motorcycle transport system in Abraka region.

Data for this article were collected through questionnaire survey in Abraka region. Questionnaires were administered randomly/systematically on respondents. This article specially aims at examining the influence of motorcycle transportation with emphasis on employment opportunities of respondents.

For the purpose of achieving the aim eighty (80) questionnaires were administered. For effective administration of the questionnaires the region was subdivided into three (3) regions or zones Viz: Ekrejeta Road, Kwale Road and Abraka-urban Road.

The statistical techniques employed include means and percentages as well as the Pearson’s Product Movement Correlation Coefficient (P.P.M .C.C.) 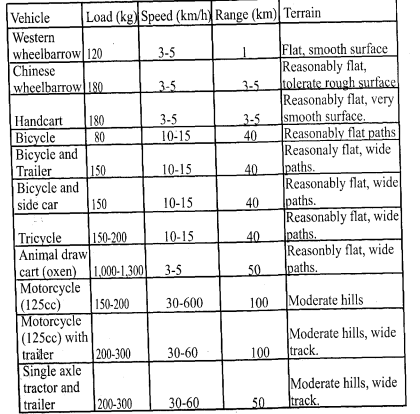 Sixty-four percent (64%) of the respondents agreed that most of the motorcycles in use in Abraka community for transport purposes are hired and thirty-six (3 6%) are of the view that the motorcycle used in Abraka are privately owned. Therefore, the lot of motorcycles in Abraka region are hired meaning that the users (cyclists) are operating on a “balance and take” basis. That is the motorcyclist pays the owner of the machine certain amount of money depending on the terms of agreement after which the machine becomes that of the cyclist.

The table above shows that the time of operation is mostly in the morning between 10.00 a.m. and reduces until the evening from 4.00 p.m. to 7.00 p.m. The peak hour of operation being in the morning and evening in Abraka region could be as a result of people going to their various places of work and their return back home. These periods have the highest percentages of 30 and 24 respectively. Following the peak hours are the hours betweens 10.00 a.m. and 4.00 p.m. with a percentage rate of2l. This could be because of parents going on “school run”.

The responses from the table above means that the fare per distance is likely determined by the passenger and the cyclist, 51% of the respondents agreed that the charge per distance during operation is constant while 49% disagreed. Meaning that, the charge varies with distance. This could be as a result of the operation hour because the fare at night or during bad weather (rainfall) and even during period of fuel scarcity fare tends to vary with distances. During such period, it is the bargaining power between the passenger and the cyclist that determined the fare. Nevertheless, the charge within Abraka region is relatively constant.

From table 7 above, the calculated value of the correlation coefficient is 0.90 approximately (see table 9). It could be deduced therefore, that as income increases through motorcycling, the standard of living of the cyclists also increases at 0.05 level of significance.

Table 8: Increase in Motorcycle and the population of Abraka Region

From the calculated values in table 8, (see table 9), the calculated value of the data using the Pearson’s product moment correlation coefficient is approximately 0.89. From table 9, it also implies that 20.79% of the population of Abraka can be explained by increase in motorcycle activities while 79.2 1% cannot be attributed to increase in motorcycle activities which could be due to other reasons.

Table 9: A correlation Table of Population and Motorcycle increase in Abraka Region 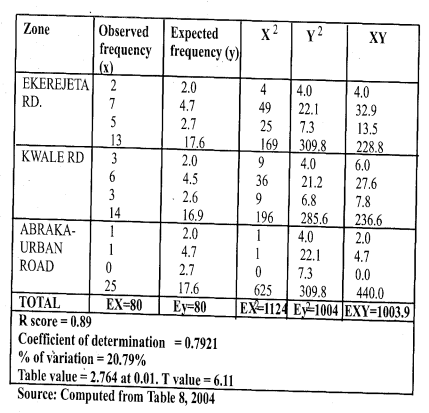 The calculated value derived from table 10 above using the Pearson’s Product Movement Correlation Coefficient is appropriately 0.86 (see table 11). Also, 26.04% of the employment opportunity can be explained by motorcycle transport in Abraka region while 73.96% cannot be explained and may be due to other factors. 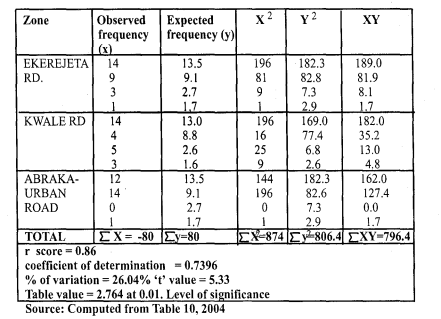 The time has come for us to accept the indispensability of motorcycle transport in Abraka region. The availability of a comprehensive and up-to-date information on vehicle population in the country makes it difficult to have an accurate car ownership ratio per capita for the country. Recent phenomenal increases in the prices of imported cars, both brand new ones and fairly used cars otherwise known as “tokunbo”, have made it difficult for the average Nigerian to own a car. Even motorcycles and bicycles are now priced out of the reach of the middle and low income households in the country (Adeniji, 1986).

Every motorcyclist should be made to register with this body before he is allowed to operate. This body should issue identity cards and uniforms for easy identification by commuters. In addition to this, the procedure for the issuance of driving licenses should be reviewed. Every motorcyclist should have either a license or a permit before he is allowed to operate the motorcycle.

The Government should reconsider the idea of introducing crash-helmets for the use of both the cyclist and the passenger. The importance of crash-helmets cannot be over-emphasized s they protect the head from severe injury whenever accidents occur.

Urban roads should from now henceforth be designed to accommodate cycle-ways. This will reduce cut throat competition for urban road space by cyclists, motorists and pedestrians thereby reducing the rate of accidents on our roads.

Existing traffic bye-laws and regulations should be reviewed to accommodate the motorcycle mode and conscious efforts should be made to ensure their enforcement.

Transport of any kind is concomitant and a prerequisite to the development of any modem society. It is indispensable in the economy of any society hence it has increased the socio-economic development of Abraka region. This research has revealed that motorcycle business has a significant effect in the provision of employment, increase in the standard of living of the cyclists and a corresponding increase in the population of Abraka region.

Adeniji, K. (1986) “Public Transportation in Nigeria: where do we go from here?” Paper delivered at the NISER Seminar Series, University of Ibadan, Nigeria, Pp. 1-22.

Atubi, A.O. and Onokala, P.C. (2004a) “Road Transportation and the Socio-Economic Development of the Niger Delta: A case study of Warn Metropolis”. Journal of Social and Management Sciences Review Vol. 1, No. 1, Pp. 102-113.

Atubi, A.O. and Onokala, P.C. (2004b) “The Accessibility of Centres to the Road Networks: The Case of Lagos Island, Lagos, Nigeria”. International Journal of Ecology and Environmental Dynamics, Vol. 2, Pp. 140-15 1.

Okoko, F. (1998) “The Demand For Para-Transit Transport Services in Nigerian Towns: The case of Motorcycle Transport in Akure. Journal of Transport Studies, Vol.2, No. 1