Evolution Of The Human Hand

The Evolution of the Human Hand

The hand is one of the most discernible features of humankind. A key advantage to hominin evolution is the advancement of dexterity and structure of the human thumb. Modern homo sapiens possess a highly distinct thumb considerably stronger than any other digit. Compared to other apes, humans have longer, flexible thumbs and shorter palms and fingers giving rise to increased manual dexterity. This enhanced dexterity is shown to be linked to specialized morphological features including a long, powerful mobile thumb, short fingers with well-developed volar pads, and more stable radial carpometacarpal joints (Almécija et al 2015). These distinctive morphological features seen in the modern human hand have been used in comparative morphological research analyses to make inferences about the comparison of the human thumb to our last common ancestor.

In regards to research, the general agreement is that the reconstruction of the hand through evolution is linked to stone-tool behavior. Additionally, the research presented is consistent with the early hominin behavior of bipedalism, which would free the hands for the essential use of tools. The purpose of this report is to provide a brief insight on the evolution of the human hand and highlight recent research with emphasis on emerging discoveries.

The human hand is considered unique in the context of evolution for its ability to oppose to pads of fingers, as well as the application of forceful precision grips and power squeeze grips.

The opposability of the human thumb is demonstrated by the ability to swing toward the palm and oppose the other four fingers to provide a tighter, precise grip on objects. It has been found that a specific piece of the human genome encodes for this definitive human feature. The demonstration of a compelling dexterity advantage may be a direct result of a gene enhancer newly found in humans. Until recently, the complexity and abundance of gene enhancers regulating genes have not been fully appreciated. Variation within the DNA sequence of enhancers are now speculated to cause changes in human development ensuring differences between humans and apes. Thus, gene enhancers may account for many observable differences between humans and ancestors including hand and foot structures, brain size, hair density, tooth patterns, and pelvic structure.

Researchers have recently discovered the gene enhancer, HACNS1, also named human-accelerated conserved non-coding sequence 1. The discovery of this gene enhancer provides evident insights into the genetic differences of thumb dexterity between chimpanzees and humans. Scientists have concluded this particular gene enhancer may have contributed to the evolution of the rare opposable thumb (Sholtis and Noonan 2010). Moreover, HACNS1 was found to play a unique gene-activating role in developing anterior limb, which eventually forms the attachment between the thumb and wrist extending into the thumb.

Dr. James P. Noonan of Yale University, conducted a research experiment to determine and identify changes in gene regulation that drove unique biological phenotypes seen throughout human evolution, particularly the developing thumb. This specific study performed genomic analysis on six non-human species including a chimpanzee, mouse, rat, rhesus macaque, dog, and chicken. Researchers used in vivo cell-based systems to identify enhancer sequences by the examination of dissected embryonic tissues (Sholtis and Noonan 2010). The study then tested specific human sequences and their corresponding acceleration in conserved non-coding sequences (CNSs). HACNS1 was identified as one of the most rapidly evolving human-specific CNSs. It showed genomic markers acting as enhancers, and the greatest amount of sequence change out of the 110,000 sequences in human evolution. HACNS1 has accumulated 13 human-specific substitutions clustered in an 81 base-pair region, despite being conserved in all other non-human vertebrates tested (Fig. 2a: Sholtis and Noonan 2010). As shown, most of these events were AT to GC substitutions. To further confirm the analysis that HACNS1 functions as an enhancer during human development, transgenic enhancer assays were conducted in order to confirm results. The enhancer assay showed strong enhancer activity in several limbs of the mouse embryo including the anterior limb (Fig. 2b: Sholtis and Noonan 2010). However, the same enhancer in rhesus macaques and chimpanzees failed to show expression in the anterior limb.

The second development of great importance is the evolution of volar pads. The function of hooked claws as a way of gripping branches has been taken over by evolution of long phalanges as well as volar pads. In humans, volar pads are essentially a ridged portion of skin on your fingertip acting as a friction pad. To aid in the function of grasping, these surfaces do not contain hair follicles or sebaceous glands. Microscopic ridges are found on each pad to increase friction. In addition to ridges, creases allow skin and joint flexibility.

Another distinct feature in the hominin thumb is the ability to perform a forceful grip with precision. The grips used by the chimpanzee differ substantially from those used by humans. In general, chimpanzees use a hook grip dominantly carried out by the four flexed digits (Diogo and Wood 2012). The thumb is minimally used as support, but does not actively squeeze against the palm. This type of grip is essentially useless when demonstrating throwing or squeezing actions due to weakness of the thumb, inability to oppose to other fingers, and the inability to overlap the adjacent index finger. Because of this inability, the species cannot generate a precise, firm squeeze or pinch. Thus, this form of hand grip is most essential to swing on branches.

From a mechanical viewpoint, there are two key requirements necessary to be able to carry out an effective grip. First, joint angles were modified in order to place the fingers in contact with a particular object. The human thumb metacarpal articulates with the other carpals in a saddle joint formation which allows the volar pads of the thumb and fingers to come in contact, allowing full range opposability (Diogo and Wood 2012).  Secondly, the muscle coordination was acquired in order to generate the appropriate force and balance at joints. The human thumb contains three muscles absent in chimpanzees; the flexor pollicis longus, deep head of the flexor pollicis, and the first volar interosseous muscle. The flexor pollicis longus muscle is the most powerful thumb muscle present in the human thumb and is responsible for the majority of force deriving from the thumb (Diogo and Wood 2012). The larger intrinsic thumb muscles and additional new muscles provide strength and control in thumb actions.

The coevolution of stone tools and human hands

The survival of human ancestors required major societal advancements. Tolerance of large stresses associated with the making of stone tools was a major factor in the evolution of the human hand. The dexterity and strength needed to manufacture such tools required the shape of hands to changed dramatically. The 1.7 million year old Acheulean hand axe was one of the first stone tools used by our ancestors and were soon replaced by more intricate, elaborate tools. Fossil evidence suggests early human ancestors, Hominidae, possessed short thumbs and relatively long fingers (Alastair and Lycett 2011). This combination was not suitable for the large stresses placed on the hand in the manufacture of stone tools. However, as the making of stone tools substantially increased, changes in the thumb opposition and joint movement aided in the changing hominid practices (Alastair and Dunmore 2015).  Researchers propose the repetitive, forceful strength needed to sculpt and sharpen hand axes would have strongly favored strong, movable digits.

Changes in the human hand also lead to a compelling reproductive advantage essentially driving natural selection to favor human hand characteristics. In past cultures of our primitive ancestors, males who were highly skilled with weapons were more likely to rise in dominance hierarchy and therefore obtain better access to resources (Young 2003). With availability to additional resources, males wielded more power and dominated over other males which led to improved access to females and promoted reproductive success. Moreover, defense against predators and more effective hunting was enhanced as a direct result from improved stone tools (Young 2003). Because hominid males were likely to dominate over other males, obtain access to better feeding sites, and provide protection, females were inclined to choose such mates when the opportunity arose.

Human hands are easily distinguished from our ape-like ancestors by possessing longer thumbs relative to other digits (Fig. 1). Modern thumbs are much more muscular, mobile, and are shorter and straighter than primate ancestors.  In contrast, the typical primate thumb is characterized by a small, short thumb in combination with long, unproportioned fingers. For decades, the dominant view among scientists was the last common ancestor (LCA) of humans and chimpanzees had chimp-like hands, and thus the human hand changed substantially in response to heavy stone tool usage (as discussed above). However, recent research suggests a significant change in the human hand occured before the evolutionary split from chimpanzees.               According to recent research performed by Sergio Almecija at the American Museum of Natural History, human hands may be more primitive than scientists once thought. The basis of the study was to challenge the idea that the last common ancestor of humans and chimpanzees possessed more chimp-like morphological characteristics. As the study suggests, the growing amount of evidence indicates that modern apes (chimpanzees, gorillas, and orangutans) have evolved since their evolutionary split from humans.

The conclusions of the study were based upon the study on Orrorin tugenensis, a femur that occupied Kenya around six million years ago. This particular femur is also referred to as the “Millennium Man” as a consequence of the similar physiology of not only modern humans and apes, but also to apes that lived in the Miocene period, dating back 23 to 5.5 million years (Almécija et al 2015). O. tugenensis both climbed trees and walked upright, a characteristics not seen in either modern humans or apes. Thus, the analysis of the study placed the femur in the bracket between the last common human-ape ancestor and the evolutionary line that led to homo sapiens. By identifying O. tugenensis’s evolutionary bracket, researchers filled in several gaps, and showed the least common ancestor was more similar to the femur than chimpanzees. This revealed that Miocene apes represented a more suitable model for ancestral morphology from which humans evolved than living apes did (Almécija et al 2015). However, since most Miocene apes did not physically look or move like living apes, they were largely overlooked in the study of the last common ancestor.

The study further established the argument that human hands have only slightly changed from the LCA of chimpanzees and humans. According to research presented, the earliest stone tools dated back approximately 3.3 million years. Ardipithecus ramidus dated back 4.4 million years and showed no evidence of stone tool making. However, new evidence has since emerged indicating members of the Ardipithecus ramidus possessed hands that resembled those of modern humans rather than the speculated chimpanzee (Almécija et al 2015). The research suggests the complex structure of the modern human hand is widely primitive in nature, rather than the result of large stresses associated with the construction of stone tools. Although additional research is ongoing, the findings of this study challenge the hypothesis that the human and chimpanzee common ancestor possessed a chimp-like hand.

Researchers have certainly suggested the existence of a morphological change of features in the bones and musculature in the evolution of the human hand.  These changing evolutionary features have fuelled suggestions that the human hand evolved in response to behavioral adaptations. The specific gripping and manipulatory abilities of hominid ancestors is certainly evident and is a continuing field of research. During this extensive remodelling of the hand, unique stone tools were produced and ultimately lead to a profound reproductive advantage. 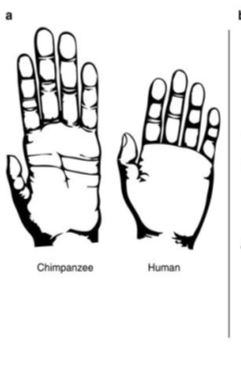 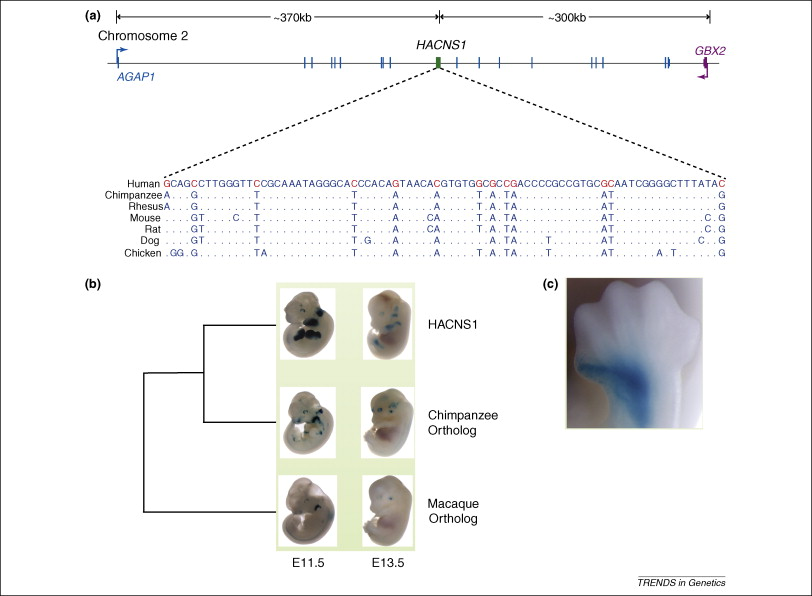 Figure 2. (a) Human-specific genomic marker HACNS1, accumulates 13 human-specific substitutions clustered in a 81 base-pair region. Note that HACNS1 is conserved in all other non-human vertebrates tested. (b) HACNS1 functions as enhancer in transgenic mouse embryos in several limbs compared to chimpanzee and macaque. (c) HACNS1 extends into hand including digit 1. Note that digit 1 is homologous to human thumb.