What controls the formation and drainage of supraglacial lakes on the Greenland ice sheet and to what extent are these processes an important control on ice sheet dynamics?

The Greenland Ice Sheet is a large ice mass in the Northern Hemisphere, made up of both land terminating and tidewater terminating outlet glaciers. Seasonal surface melting produces melt water that collects on the surface of the Greenland ice sheet in the form of supraglacial lakes (Luthje et al., 2006).

The storage and drainage of lake water is particularly important in forcing a hydraulic connection between the ice sheet surface and the ice bed interface (Bartholomew et al., 2012). For this reason, drainage of these supraglacial lakes is of particular interest in understanding the influence that they have on ice sheet dynamics. Supraglacial lakes have been known to drain in less than one day (Box & Ski, 2007). The fluctuations in surface water delivered to the glacier bed from the rapid drainage of these lakes are known to affect the speed that the ice sheet travels at and have been known to cause local uplift of the ice sheet (Sundal et al., 2011).

The purpose of this paper is to discuss the factors that control the formation and drainage of supraglacial lakes on the Greenland ice sheet and the implications these processes have on the control of ice sheet dynamics.

In cases where drainage is prevented, melt water can be stored on the ice sheet by a form of sediment or ice barrier, creating a supraglacial lake (Benn & Evans, 2010). Seasonal warming produces melt water that collects in closed surface undulations on the surface of the ice sheet. The supraglacial lakes across the Greenland ice sheet vary in size from a few hundred meters to 1500m in diameter, with depths of 2-5m (Box & Ski, 2007). 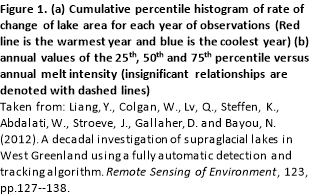 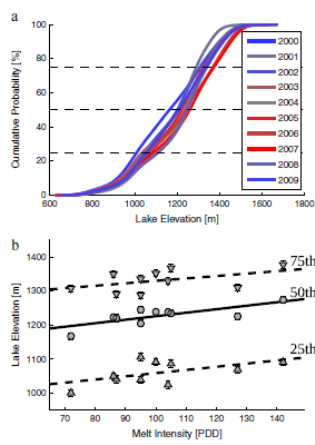 There is an upper limit imposed on the lake distribution and formation by elevation because of temperature and basal sliding restrictions (Liang et al., 2012). Due to the lapse rate, temperature decreases with elevation. When it reaches a certain point on the ice sheet it becomes too cold for melting to so there is no melt water for filling the lake basins. As bedrock topography is only expressed in ice surface topography in regions experiencing basal sliding, interior regions of the ice sheet that do not experience basal sliding are unlikely to contain ice surface depressions suitable for lake formation (Liang et al., 2012). Figure 1(a) shows a histogram of the rate of change of lake area over 10 years of observations. In (b) only the 50th percentile shows a significant relationship with melt intensity. From the two graphs it can be deduced that there is a positive correlation between annual median lake elevation and annual melt intensity, indicating that lakes are more active at higher elevations during warmer or more intense melt years (Liang et al., 2012). During more intense melt years, lake drainage events become more common in higher elevations. These regions, which don’t normally experience rapid surface water transfer to the bed of the glacier become more susceptible to moulin formation (Liang et al., 2012). Only lakes above 1050m show inter-annual changes in response to seasonal changes in melting intensity (Liang et al., 2012).

The area of supraglacial lakes is more controlled by the local topography. Lakes at lower elevations tend to be smaller because the steeper ice surfaces prevent as much water being collected and stored (Bartholomaus et al., 2007).

Although topography and elevation influence the formation and distribution of supraglacial lakes in Greenland, the main control is the season. The lakes will only form during melt season, when temperatures become warm enough to produce melt water to fill the empty lake basins (Luthje et al., 2006).

In order for melt water stored as supraglacial lakes to reach the bed of a glacier, a through ice transport system is required. In a study, Das et al. (2008) monitored and observed the rapid drainage of two large supraglacial lakes down to the base of the Greenland ice sheet. The lakes, on the Western side of the Greenland ice sheet began filling in early July, reaching maximum extent around the 29th of July. At first, lake levels began to fall slowly and steadily and then levels dropped rapidly. This rapid drainage event drained the lake in around 1.4 hours (Das et al., 2008).

From observations, it can be deduced that the drainage of the lake occurs in four stages. First of all initial slow, steady drainage occurs through crevasses (Chu, 2014). No water reaches the bed of the glacier, suggesting an inefficient drainage system. Next, connection to the bed occurs and drainage through a fracture system occurs. This stage gives fast and direct drainage of the lake to the bed of the glacier. Thirdly, Moulin formation and closure of the fracture system occurs. Frictional heating from the turbulent water flow and rapid drainage in stage two melts through fracture walls, developing them into discrete moulins (Chu, 2014). Moulins are associated with rapid lake drainage and immediate transfer of water to the ice sheet (Chu, 2014). This rapid transfer of water to the glacier bed has potential to overwhelm the subglacial hydrologic system. The final stage occurs once the lake has drained. Moulins stay open to allow the drainage of surface melt to the bed of the glacier (Das et al., 2008). Evidence suggests that moulins in existence in the bottom of the lakes fill with snow and become dammed in the winter. Lakes are filled during the summer melt season until the moulins are reopened by a combination of pressure and melting (Box & Ski, 2007).

Fracture propagation through the ice suggests that once initiated water filled crevasses will propagate downwards through the full thickness of the ice through a process called hydrofracture (Das et al., 2008). The water ponds above small crevasses in the lake basin, exerting stress on the crevasse and eventually the ice starts to fracture. Initially the water refreezes in the crevasse. Heat created from refreezing warms the ice and it melts, advancing further down into the crevasse. Once a connection with the bed is established water from the lake can freely drain. There is no limit to the depth of a water filled crevasse so it is able to reach the bed of a glacier. The process is only limited by the supply of melt water needed to keep the crevasse full (Weertman, J. 1973). Crevasses and moulins connect the surface of the ice sheet with englacial environments, providing a route for melt water to drain from the supraglacial lakes through the ice sheet (Chu, 2014).

Although only lake drainage processes for two lakes were observed by Das et al. (2008) in this particular study it can be assumed that other lakes on the Greenland ice sheet drain in the same way. The presence of fractures in other empty lake basins suggests that drainage processes are similar for all supraglacial lakes (Das et al., 2008).

Throughout melt season, drainage patterns of the lakes across the Greenland ice sheet migrate inland. Lakes at lower elevations tend to form and drain earlier than those at higher elevations (Bartholomaus et al., 2007).

Rapid drainage events are of particular interest in understanding ice sheet dynamics and hydraulic response. Fluctuations in surface water are known to affect the speed of ice sheets (Sundal et al., 2011). Some suggest that more influx of melt water to the glacier bed, from lake drainage events could produce ice sheet acceleration. Moulins provide a method of rapid lake drainage, supplying large influxes of water to the glacier bed with the potential to overwhelm the subglacial hydrological system causing uplift and increase basal sliding (Chu, 2014). They can only support a fraction of the lake water, keeping water pressure at the base of the glacier high and encouraging increases in basal movement and uplift (Box & Ski, 2007). Higher water pressure favours faster sliding as it reduces drag between ice and the bed (Bartholomew et al., 2012).

Speed ups of the ice sheet are caused by an increase of water pressure at the its base, enhancing basal sliding. This increase in basal water pressure can be provided by melt lake outbursts (Box & Ski, 2007). There are other processes involved in basal sliding but for the purposes of linking it with glacier hydrology we are only interested in cavitation. Cavitation vertically jacks the glacier upwards, reducing friction between the glacier bed and rock interface and decreasing effective pressure. When effective pressure and friction are low basal sliding rates are high. In the same study as mentioned above, Das et al. (2008) observed horizontal and vertical movement of the ice sheet that coincided with rapid drainage of the lake.

A large uplifted block of ice in the centre of the lake basin evidences local uplift of the ice sheet during rapid lake drainage. Based on topographic studies, it is likely that the large block in the centre of the lake was uplifted during a drainage event (Das et al., 2008). The elevation change reported by sonar surveys suggests surface uplift of around 6m across the block. The large volume of water transported to the ice sheet bed during lake drainage would have produced several meters of uplift at the lakes centre (Das et al., 2008).

Figure 2, produced from a study by Bartholomew et al., (2012) supports Das’ et al., (2008) conclusion that drainage of supraglacial lakes can affect velocity and uplift the ice sheet. It shows rapid increases in ice velocity and surface height after the drainage of a supraglacial lake observed on the Western transect of the Greenland ice sheet. Drainage of the lake can be linked with a 400% increase in ice velocity and 0.3m of uplift in less than 24 hours (Bartholomew et al., 2012). 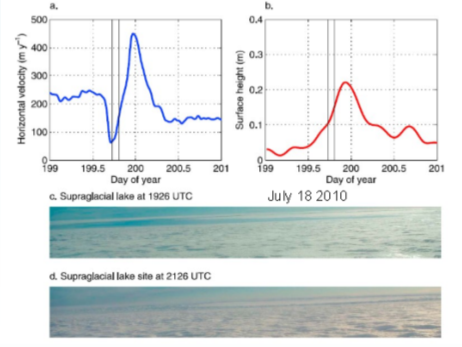 Both outlet glaciers and slower moving ice sheets across Greenland show a seasonal speed up in response to enhanced melt water delivery to the glacier bed and from pulses of water from lake drainage. The ice sheets continue to speed up until a maximum velocity threshold is reached; sequentially the glacier slows down (Chu, 2014). This slowing down of the glacier is not to be expected if lubrication by melt water is the primary mechanism of speeding up the ice sheet. The reduction in velocity suggests subglacial drainage switches from a linked cavity system to a more efficient channel drainage system (Chu, 2014).

Understanding the hydrology of supraglacial lakes is important as they have the potential to supply large volumes of water to the bed of the ice sheet and affect motion. Both an increase in glacier velocity and local uplift is observed when supraglacial lake water drains to the bed of the glacier. However, constant high influxes of water are not consistent with continued increase in velocity because the subglacial drainage system switches to a more efficient system (Bartholomaus et al., 2007). Large pulses of water delivered to the bed from drainage of supraglacial lakes overwhelm the subglacial hydrologic network and increase basal motion. Moulins provide rapid drainage of large supraglacial lakes into the ice sheet hydrological systems, while crevasses provide a more steady drainage method. The location, area and potential melt water available to fill these supraglacial lakes is controlled by the elevation and topography of the surrounding area, and more importantly temperature. In turn, these factors could be controlled by climate change. For this reason it is important to monitor the processes associated with glacial lakes to get a clearer understanding of the impacts any future climate change will have on glacial lakes and the Greenland ice sheet.

Tweed, F. and Russell, A. (1999). Controls on the formation and sudden drainage of glacier-impounded lakes: implications for jokulhlaup characteristics. Progress in Physical Geography, 23(1), pp.79–110.