1. what is a genetically inherited disease?

Genetic disorders are typically inherited (passed down) in either a dominant or recessive way. We each have two copies of every gene on our 22 numbered chromosomes. When a disorder is dominant, the disease can occur when there are DNA mistakes in only one of the two gene copies. This means that if a parent has the DNA change, there is a 50-50 chance that it will be passed on to each child. When a disorder is recessive, there must be mistakes in both copies of the gene for the disorder to occur. This means that both parents must carry at least one copy of the specific gene change in order to produce a diseased child.

Gaucher’s disease is an example of a genetically inherited disease. ‘Gaucher disease occurs in 1 in 50,000 to 100,000 people in the broad population’ (ii) and occurs more commonly in people of Ashkenazi Jewish heritage than anyone else. ‘This disease affects 1 in 500 to 1,000 people of Ashkenazi Jewish heritage’ (ii) the reason it affects people of Ashkenazi Jewish heritage is because of ‘founder effect is where a gene mutation is observed in high frequency in a specific population due to the presence of that gene mutation in a single ancestor or small number of ancestors. When the group of ancestors mates primarily within their own ancestral group over many generations, the frequency of the gene mutation remains high’ (iii). Gaucher’s disease may appear any time from childhood to adulthood.

Mutations in GBA gene cause the disease with each pregnancy; each carrier has a 50% chance of passing on the defective gene. If both parents are carriers, there is a 25% chance their child will inherit two defective copies and will develop Type 1 Gaucher’s Disease. ‘A carrier is a person who has a change in one copy of a gene. The carrier does not have the genetic disease related to the abnormal gene. A carrier can pass this abnormal gene to a child.’(i)

A genotype is the genetic make-up of an individual organism. Gaucher’s Disease is located on chromosome 1, that prevents the production of an enzyme, glucocerebrosidase. “Cytogenetic Location: 1q21 (the long (q) arm of chromosome 1, position 21) base pairs 153,470,866 to 153,481,111.” http://wiki.ggc.edu/wiki/Gaucher_Disease 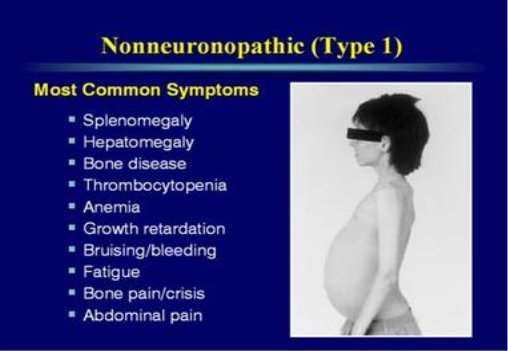 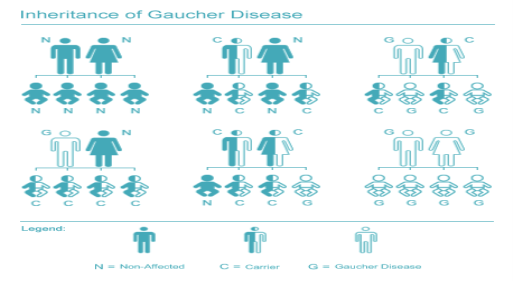 4. A. Description of disease

Gaucher’s disease is an autosomal recessive inherited disorder, which means the disorder happens on a non-sex chromosome, affecting the metabolism, when a type of lipid called glucocerebroside is not properly broken down. The body does not produce the enzyme called glucocerebrosidase that breaks down and recycle glucocerebroside. This leads to the lipid to build up in the liver, spleen, bone marrow and nervous system.

4. B Types of the disease

Type 1 is the most common and progressive, genetic disorder that generally has symptoms relating to their bones. There are also a lowered number of red blood cells and an enlarged liver and spleen. It is different to the other two types as it usually does not affect the brain or spinal cord.

Both are known as neuropathic forms because they are characterized by problems that affect the nervous system. Type two is usually life threatening

In the past there has been no way to treat the disease but rather treat the symptoms such as blood transfusions, surgery for bones and joints and removing the spleen.

6. A.1 Enzyme replacement therapy. This approach replaces the deficient enzyme with artificial enzymes. These replacement enzymes are administered in an outpatient procedure through a vein typically in high doses at two-week intervals. Treatment is very effective in people with type 1 Gaucher’s disease and. enzyme replacement therapy can help reduce the enlargement of the liver and spleen, help to resolve blood abnormalities and improve bone density. Often people experience an allergic or hypersensitivity reaction to enzyme treatment. ’ERT has a remarkable effect on hepatosplenomegaly, with an average overall decrease of 25% in liver and spleen volume after 6 months of therapy. In most patients with anemia, haemoglobin levels rise by 1.5 g/dL during the first 4-6 months of therapy. An additional increase of 1 g/dL is observed in the subsequent 9-18 months in patients with persistent anemia. The platelet count responds more slowly, doubling on average over 1 year’. (iv)

6. A.2 Bone marrow transplantation. This is a surgical procedure that has been used for severe cases of Gaucher’s disease. In this method, blood-forming cells that have been damaged by Gaucher’s are removed and replaced, which can reverse many of Gaucher’s signs and symptoms. It is a high-risk operation.

6. A3Medication. There is oral medication called miglustat (Zavesca) Disadvantages are diarrhoea and weight loss as common side effects.

SRT lessen the amount of making and build-up of waste material, inside cells. This means that even though patients are deficient in an enzyme that breaks down waste, with SRT, the enzyme they do have is better able to stop waste from collecting inside cells. SRT is used for Type 1 Gaucher patients for whom Enzyme Replacement Therapy is not an option.

Karyotyping is a test to examine chromosomes, which can help recognize genetic problems as the cause of a disease. This test can count the number of chromosomes and look for structural changes in chromosomes. This is done by isolating and staining chromosomes then examined.

Gene maps are used to help scientists find genes, usually those involved in human diseases. Scientists study many families affected by a disease, and then tracing the inheritance of the disease and of specific genome landmarks through several generations. Landmarks that tend to be inherited along with the disease are likely to be located close to the disease gene and become “markers” for the gene in question. Once they have identified a few such markers, scientists know the approximate location of the disease gene. Next, they look for genes in that part of the genome and study the genes one by one to learn which one is involved in the disease. They might look for a gene that has a different sequence in people with the disease than it does in healthy people. Or they might look for a gene with a function that could be related to the disease.

The Human Genome Project holds is attempting to compile physical and genetic maps of the human genome. A genome is the entire DNA in an organism. It may help a lot of people understand where they came from and find out which gene is causing problems. This is done by isolating and staining chromosomes then examined.

But it may lead to parents attempting to determine which character children will inherit. It may also possibly lead to a large number of abortions Parents will be informed as to whether their son or daughter will have any serious genetic disorder, and as a result, the parents may opt to abort the foetus.

It may restrict the human gene pool and interface with natural selection and loss of diversity among the human population.

Also health or life insurance policies may be deemed to an individual on the basis of his genetic information and charge higher rates because they are prone to cancer or another disease. Businesses could discriminate against certain people based on their genes which could damage a person’s physiological health.

A person might find out about their genetic make-up and find out they are prone to a disease which in turn makes them give up on life.

Although there are negatives, I do think genome mapping is going to benefit society

8. Genetic make-up in the future my personal view

I feel that one day we will be able to overcome our genetic make-up completely. While this may benefit people with genetic diseases it may be used in a negative way such as someone trying to create a perfect race.

There are rapid advancements of science and technology people with problem genes such as Gaucher’s disease and cystic fibrous can soon be able to have normal genes. There is plenty research being done for future cures such as the Infectious Disease Research Institute. By replacing enzymes and recombinant DNA, which will be explained further on, this is the first step in being able to conquer our genetic make-up.

Genes code for proteins, and proteins are made up of enzymes. When a gene is mutated and doesn’t produce the gene product this can mean an enzyme is missing or not working correctly. One way to treat people with genetic diseases where the gene doesn’t produce the enzyme needed is enzyme replacement therapy. Enzyme replacements must be taken for the rest of a patient’s life. Occasionally people experience an allergic or hypersensitivity reaction to enzyme treatment which is a disadvantage.

Another process which could help with changing our genetic make-up is recombinant DNA technology which revolves around the activity of DNA in the making of protein. By doing this scientists can change the nature of the DNA and of the gene make-up of an organism.

Other methods being researched for genetic diseases cures such as gene therapy which is an experimental stage which uses genes to treat or prevent diseases. Researchers are testing many different approaches to gene therapy such as replacing a mutated gene with a healthy version of the gene and introducing a new gene into the body to help fight the disease. Gene therapy is only being tested on diseases that that have no other cures such as cystic fibrous and Gaucher’s disease.

RNA interface (RNAi) is also in an experimental stage. What happens is that is now possible to selectively silence the activity of a single gene.

The combination of stem cell technology and gene therapy is also in experimental phase. What happens is scientists take skin cells from a person with a disease such as a metabolic liver disease, fix the mutation by erasing the incorrect DNA letter and inserting the correct one. Then turn the skin cells into liver cells by stem cell therapy.

All of this research happening makes me hopeful that soon we will be able to help those with diseases.

The reason I chose Gaucher’s disease was because I was planning to do Charcot-Marie tooth disease and there were too many sub groups and on the web page there was a link to Gaucher’s disease. I chose it mainly because I was interested on how it affects the body and in school we have learned about the lymphatic system so I could understand. I could have been possibly influenced to think that the cure for the diseases will be out soon by the information I have found out about the research being done currently. I didn’t know actually how much is being done and this could have persuaded me to think me to more positively. In conclusion I do believe we will be able to conquer our genetic make-up soon. Technology and science are rapidly becoming more and more advanced. We can already make enzymes work better and researching how to silence a gene that was causing damage. There is hope for people with defective genes as there is treatments and medications to help relieve pain and soon to eliminate all defective genes.