Globalization of Technology in Latin America

Globalisation and technology have influenced every part of human life, in almost every country in the world from the economy to socialisation and communication. We use technology in our day-to-day life, from cooking and speak with relatives/ friends in another part of the globe and so for that keep people in touch. Moreover, in this context, I decided to explore how is the technology been working in Latin America countries, to see if they are developed and been coped with other developed countries because, without technology, today’s society would struggle with the daily bases mundane of things.

The internet has revolutionised the way the organisation communicates, shops and trades. The internet has become a necessity in developed countries. However, some States have adopted this new technology faster than others have. This essay looks at the evolution of technology, and the possible reasons why it has can be behind when compared to other countries economy, welfare states as well as other reasons.

Globalization of technology in Latin America

The debate over the state and the market has traditionally been an axis of political polarisation in Latin America. The ideological discussion tends to opt a priori for one or other of these principles as establishing the exclusive and excluding rationality of social organisation. In recent times, this view has given way to a more pragmatic approach, which reviews on a case-by-case basis the extent to which market liberalisation is possible and to what degree state intervention is necessary, (Beverley, Aronna, & Oviedo, 1995).

This wisdom is most welcome, though it proves to be insufficient. A muddling-through strategy can succeed in the short run, but it is risky economically and politically. On the one hand, a cyclical approach, which dispels all reference to a “development model”, makes it difficult to establish the stable and consistent rules of the game demanded by a market economy. On the other hand, this de-dialogising of the debate can deplete representative democracy by supporting governments that carry out programs that are manifestly contradictory to their electoral promises.

Consequently, it seems convenient not to be satisfied with the acquired pragmatism. To prevent the state or the market from be fetishized, in the form of superior rationality, a brief historical review becomes opportune. It allows visualising not only the continued coexistence of the two logics but also the combination variable between the two. The first and foremost point to note is that in Latin America – unlike Europe – a capitalist society were not established before the development of the state during the nineteenth century, (RDF AND JSON-LD UseCases). Capitalism is not a given historical element that precedes state regulation.

This has an inevitable consequence for the configuration of the social order: it the State that assumes the task of introducing a modern society. From this derives the specificity of state interventionism explicitly dedicated to executing a ‘model of development’ for society. That is, state intervention does not correspond so much to a ‘corrective’ market function as to a deliberate effort promote economic and social development. This implies, on the other hand, that the market economy depends not only on the state initiative but also has a close relationship with the state reason (national question, social issue).

The Latin American economy is considered a developing economy since much of its population is the primary sector. By Marcelonamura, only a few countries have significant portions of the economically active community in the secondary industry. However, the tertiary sector has grown the most in almost all Latin American countries.

However, some of the Latin America countries, Gross Domestic Product (GDP), are lower than the average OECD countries.

Latin America grows a little in investment and innovation, from average 0.5 % of GDP in 2004 to 0.63% in 2009, while other OECD countries increased from 2.2% to 2.4% very little significance in the same period. In realistic and from wide disparities, Brazil is the country who invested the higher proportion of GDP, followed by Uruguay, Argentina, Cuba and Chile with high private investment in R&D. 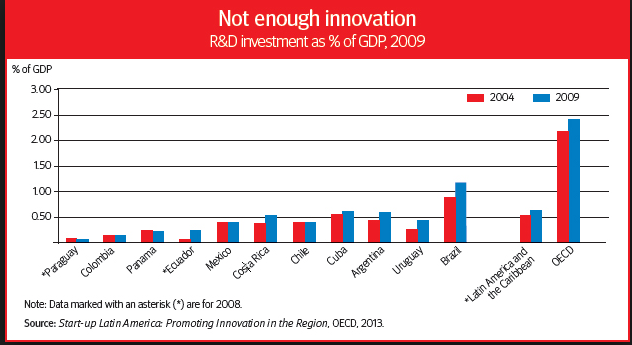 The main reason why Latin America it slower, it because all labour sector still accounts for 60% of total manufacturing, while in North America, they focus more on the knowledge-intensive industry with steady growth.

Latin America has the limitation in innovation because of the lack of acquiring machinery and equipment for their science and technology activities.

In the privatisation sector, the future seems to be open networks, virtualising essential functions and software so that operators can have the agility to design and deploy services, and the telecommunication would help in the development, economic growth, innovation and productivity, of those countries.

Argentina in early 90’s state-owned telco Entel network was sold as part of the country’s economic reform program, later in the same year, Telmex of Mexico changed control of the government into the hands of domestic and foreign investors, (Casanova et al.).

The wave of privatisations, mergers and acquisitions triggered by these two actions led to a series of technological and commercial changes in the telecommunications sector of Latin America although the shift from public to private monopolies does not necessarily mean a better service, (Casanova et al.). 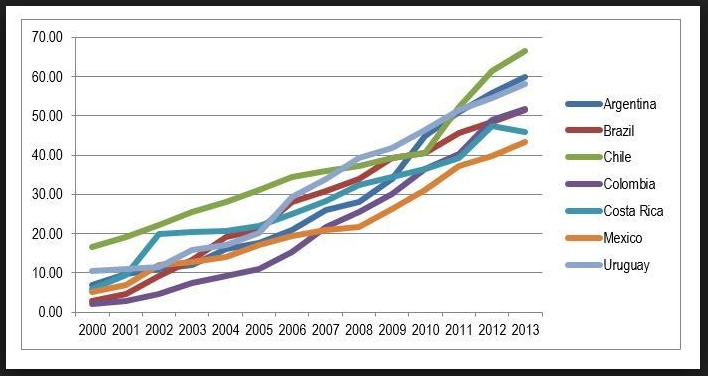 Between late 1990 and 2013, the region of the telecommunications sector has climbed significantly, increasing the number of telephone lines and internet users from 1 million to 68 million, the number of mobile subscribers increased.

Optics Fibre helped Latin America to integrate rapidly into the global telecommunications market the expansion of Internet access and mobile services, just as the disposable income in the leading Latin American economies began to grow, together with the number of people able to acquire mobile phones for the first time. The mobile region operators, keen to take advantage of this growth, have been investing and innovating since then to meet the needs of this market. 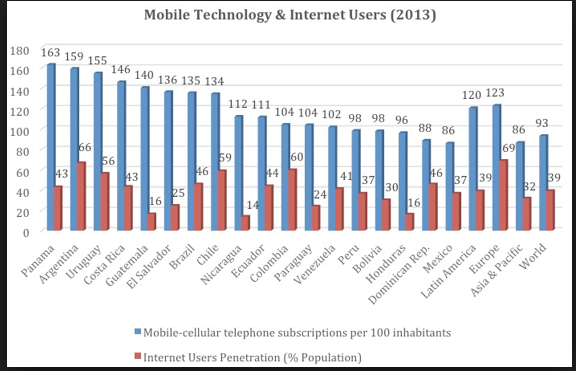 The success of mobile telephones in Latin America it can be attributed to the competition among operators; most countries have at least three providers, (Casanova, Rullán, Emerging Markets Institute, Johnson School of Management, & Cornell University).

Also from the Latin Countries Chile was the first privatising their operator in 1987, followed by Belize ( 1988), Argentine ( 1990), Mexico and Venezuela ( 1991) and the other. Telefonica ( Spain) a prominent player such as Telmex (Mexico), in the other side Telebras Brazilian ( Brazil), Portugal Telecom ( Portugal), telecom ( Italy), were the four main second privatization type launched, and for that a becoming a significant sector driven by globalization for Latin America countries, (Casanova, Rullán, Emerging Markets Institute, Johnson School of Management, & Cornell University).

One of the most important achievements of the recent period of economic expansion in Latin America has been the substantial reduction of poverty and the surge of an emerging middle class, (Development). Figure 4 shows an average income and Inequality between the countries, in which Haiti seems to have a high percentage in coefficient percentage inequality but lower in Income relative/among the other. In the other side, it is clearly for Chile to have a high percentage of the coefficient, and a high percentage for income and this could be among Chile becoming the first country with the private operator. 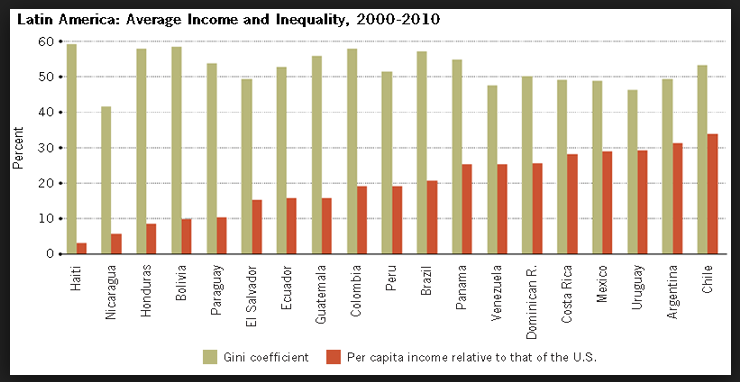 The world today is characterised by constant technological development, which affects our society in different ways. We live in world globalization where digital inclusion, which provides for the accessibility of every citizen to the computer and the Internet, has been touted as a fundamental pillar for democracy and citizenship by ensuring that individuals enjoy the exercise of social rights. Globalization, in addition to other things, is the result of such development and is a phenomenon that cannot controlled. The scope of new technologies and globalisation has affected the educational environment in countries of Latin America.

Reflection on the various factors that drive education technology in Latin America from the perspective of our globalised world makes it possible to better understanding of trends leading such countries to grow and make it possible for a significant number of people to have access to knowledge. That possibility, in turn, tends to shape and modify the way services produced.