How can BREEAM help to achieve high qualitysustainable urban design in

A case of Dhaka, Bangladesh

Dhaka, the capital city of Bangladesh is one of the most densely populated city of world. The rapid development of urbanization has made it difficult for us to ignore the result of loss of cultivated lands, water bodies, vegetation and wetland, which are prominent factors for environmental sustainability of any mega city. According to the top 20 megacities by population, Dhaka stands 5th  and its population is 18.237 million, with a density of 23,234 people per square kilometre within a total area of 300 square kilometres.

Lack of affordable, efficient and safe transportation system has various adverse effects on the city and on its people. Inadequate malfunctioning old buses, absence of mass transit system and paratransit against the demand of such an extensive population results in huge Traffic congestion, accidents, climate change and air pollution. Without providing sufficient public infrastructure, it is impossible to bring a change for the unbearable traffic problem and air pollution hazard in Dhaka. (Unescap.org, 2018)

Although mass transit is recommended for the smooth and efficient transport system in a city, still Dhaka is not planned enough to flourish bus service or light rail service or rapid transit system in the city. Bus is the available mass transit in the city. Moreover, income level of the inhabitants of the city is not high. So a huge demand for traveling by bus is there. (Ahmed, 2004)

The aim of this essay is to critically evaluate BREEAM’s standards and assessment method which can be implemented to reduce the current problems and to achieve high quality sustainability in public transport system in Dhaka.

Dhaka is perhaps the only mega city without any well-organized and properly scheduled public transport system. The population of Dhaka is 8.906 million (2011). The public transport modes of Dhaka incorporate double decker bus, single deck large bus, minibus, collective transport (staff bus, school/college/university bus) and rail. The number of bus vehicles in the city account for 16% of all motorized vehicles which carry 77% of the population (STP, 2005). There are approximately 400 km of footpath available for pedestrians ‘movements. But almost 40% of these footpaths are occupied by vendors and other encroachers (Rahman M.S., 2008). Due to insufficient public transport system, the use of private transport is increasing alarmingly thus creating huge traffic congestion and air pollution as well. There is a lack of proper connecting roads in the east west direction and consisting two major connection way through north-south direction creates a huge traffic congestion. Insufficient routes, disobedience of signal, competition of the buses in the same route to get more passengers creating life hazard for the passengers, absence of proper right of way, fixed schedule and passenger information system contributes extensively to the existing problem. Several incidents have taken place because the bus drivers often carry false driving licence and creates indiscipline in the roads. 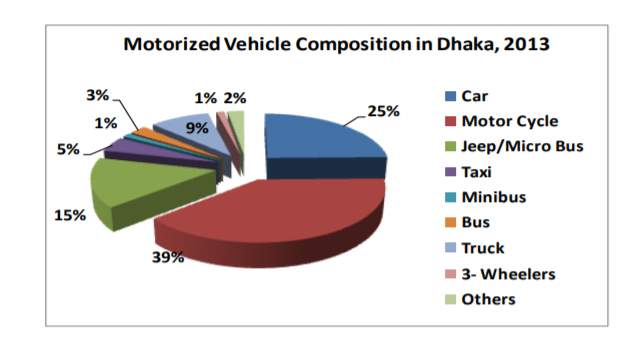 With the increasing number private vehicles (according to the chart), the CO2 emission has increased alarmingly and thus contributing to air pollution occurring in Dhaka. The inhabitants are suffering from headache, eye and skin irritation and breathing problems.

2.2  The significance of Public Transport System

Public transportation system contributes positively to every community. A strong public transport system helps to generate a well-balanced traffic flow and thus improves the mobility of its inhabitants.

Transportation infrastructure which provides safe and reliable mobility for the inhabitants, to services and facilities, at global and local level with minimal emissions prove to be sustainable and equitable transport systems (Figure 1.1) (Black, 2010). BREEAM’s assessment helps to understand the demand for public transport and assess the transport system based on environmental and social sustainability. 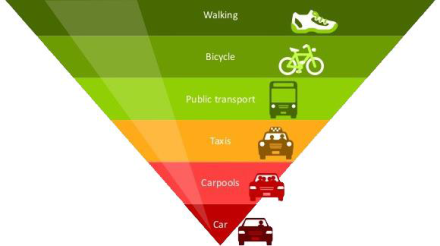 In Bangladesh, motorized traffic is growing rapidly, around 300 new motorized vehicles are coming on to road every day. The number of registered motorized vehicle grew from 737,400 in 2003 to 1,751,834 in June, 2012. More than 40% of all registered vehicles are in Dhaka (BRTA, 2012). The privately owned motor vehicles are increasing rapidly ( 200% for cars & 250% for motorbikes over the last 8 years). There are 7 flyovers in Dhaka which is completed, 2 are under construction and 4 other flyovers are at the procurement stage.

Ten years ago, nearly 7,500 buses plied on the streets of Dhaka, transport owners and workers claim. But that number has astonishingly dropped even as the number of citizens increased twice by 2015. According to latest Bangladesh Road Transport Authority (BRTA) data, currently 5,407 buses are covering the 168 routes across the capital. Of them, 3,126 are minibuses and 2,281 buses. ( Source : Daily Star,2015)
2.3.1. Inadequate public transport facilities

The absence of mass rapid transport and inadequate number of buses cannot serve The increasing number of flyover cannot serve the huge population. The Strategic Transport Plan (STP, 2005) has recommended, the public transport (Bus/Rail service) should be augmented rather than making more flyovers. Moreover, Dhaka City has very inadequate road networks, which are only 8 or 10 percent of the total city area, whereas the acceptable ratio is 25 percent. The width of the roads varies from 6 to 40 m. The main roads are 15 to 25 m wide, newly built roads are 40 m wide while the roads in the older part of Dhaka are less than 6 m wide (Chowdhury, Mamun, 2013). 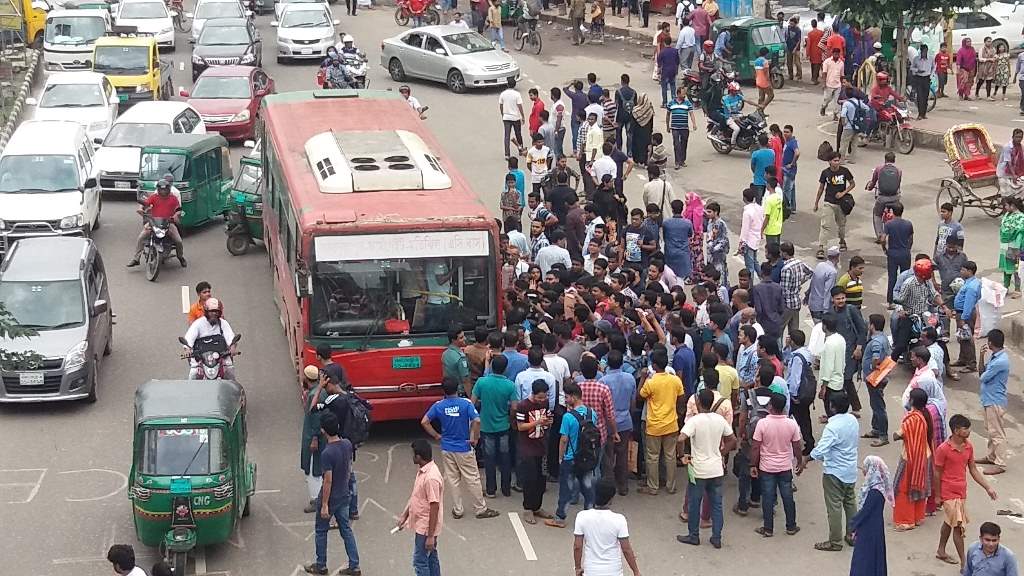 The increasing number of private vehicles and unfit public transports are the major cause of serious air hazard in Dhaka. The decreasing air quality is a hinder to the pedestrian and bicyclist in the city. According to US Air quality index, Dhaka is one of the most polluted city in the world. The transportation sector generates the largest share of greenhouse gas emissions. Nearly 28.5 percent of 2016 greenhouse gas emissions is caused by this sector. (US EPA, 2016). As the private vehicles are increasing rapidly, the need to control environmental pollution is also urgent. People who are commuting in Dhaka every day, are suffering from serious health damage as a result of high emissions from motorized vehicle.

About 3.2 million business hours are lost every day, which is about one hour per working people (Osman, 2011). The operating speeds in cities have fallen by more than 50 percent in the last two decades (Khan, 2013). Due to the number of vehicles on the road, people need to stay on the road for approximately 3 .30 hours due to traffic jam. This congestion is increasing day by day and not only it is killing business operation time but also impacting people’s health and work efficiency as they have to stay on the road for a long time in scorching heat and hazardous (air quality) environment. 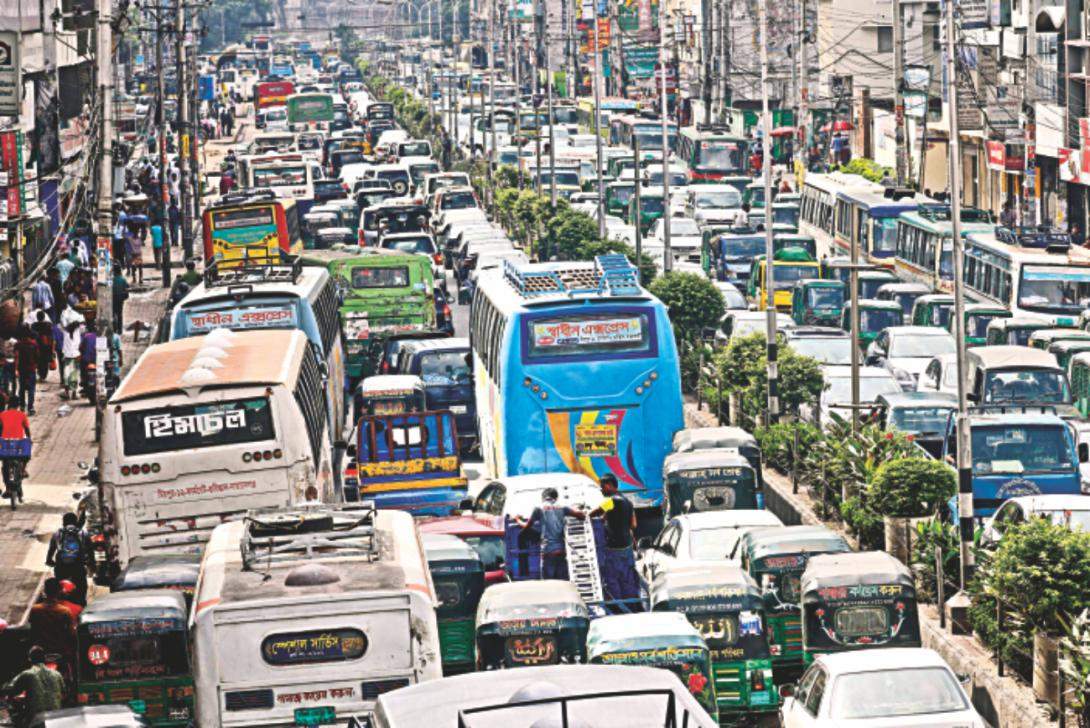 The traffic management is at a stake in Dhaka. The traffic police have to manually control traffic signal like primitive era. Lack of electronic provisions and disobedience to the traffic rules are leading to huge traffic congestion. Vulnarable roads and pedestrian walkways are causing fatalities and casualties. The key problems are:

NW Bicester is the first Eco town in UK. The vision was to retain 40% of the environment as a green space.

“The overall design is centred around four urban and four rural areas interconnected through green lanes which include both direct and leisure routes, so everyone can get from home to work, and play, in no time at all.” (Bicester Masterplan, Vision & Objective, 2014) 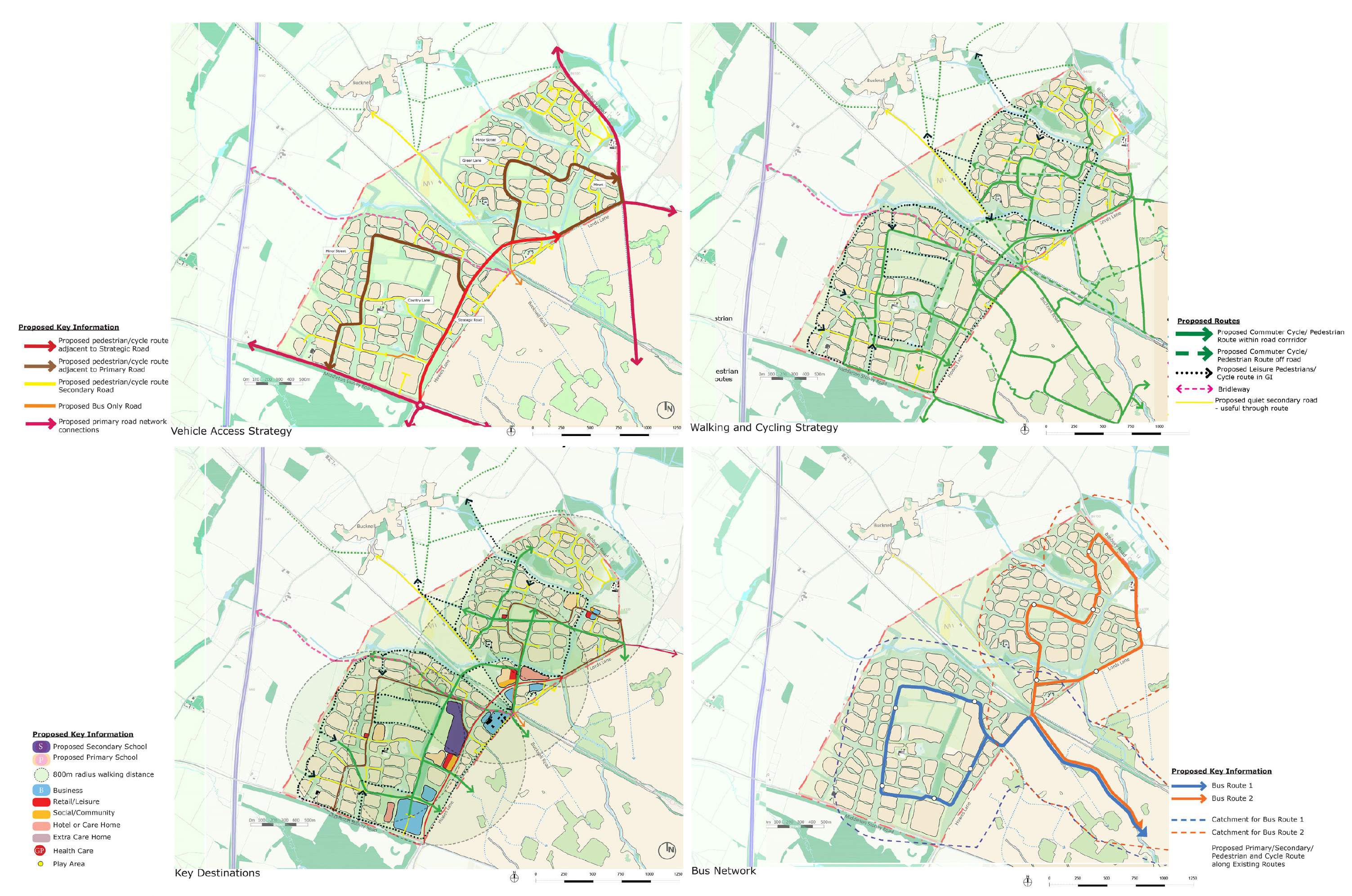 “Principles of “walkable neighborhoods” and “filtered permeability” have been applied in the master planning to determine the mix of uses and connections to predominantly daily facilities within the new community.” (North west Bicester SPD, 2015)

According to BREEAM standards, the following actions for improving movement framework have been taken to make NW Bicester, a sustainable Eco town: 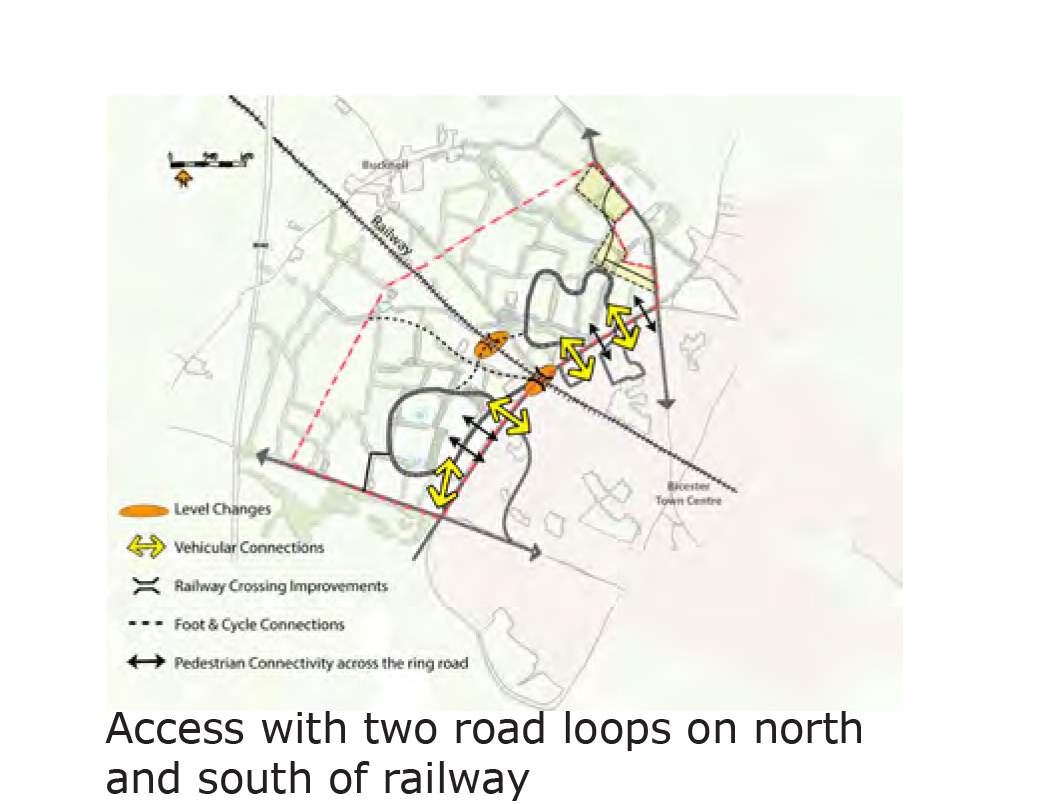 There are two local centres which are closely located to the residents. Two primary schools are also located in the middle of the housing areas so that people can reach there by walking. The additional recreational facilities, food outlets, ATM machines are located at a certain distance within the reach of pedestrian movement. These integrations with existing housing will allow its residents to enjoy the convenience of less travel distance and time management.

“The Masterplan proposes a bus network through the site designed to transport passengers directly and efficiently to their destination and give the bus priority over other road vehicles.” (North west Bicester SPD, 2015)

“The ability of homes to provide flexible space for residents to work from home is a requirement of the phase 1 exemplar development.” (North west Bicester SPD, 2015)

The homeworking facility will provide flexible opportunity for its residents which will reduce the need to travel thus resulting into less traffic congestion. Also it will facilitate the provision of small business and local trader to use their home for employment.

BREEAM is a sustainability assessment method that is used to assess masterplan projects, infrastructure and buildings. If the criterions can be implemented, a successful sustainable transport system can be installed in Dhaka. The criterions are 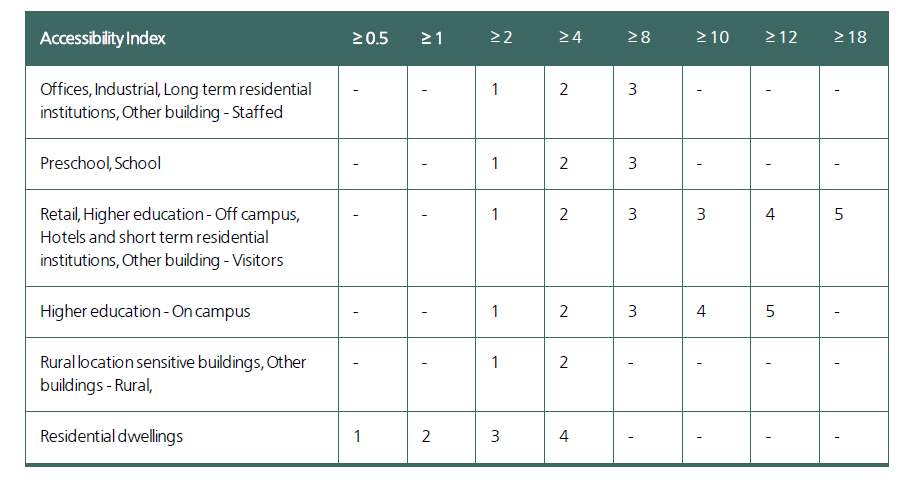 BREEAM uses the PTAL method to access AI and the indicators are:

This credit is applicable where it is not possible to achieve any of the available credits using the Accessibility Index criteria.

For buildings with a fixed shift pattern, i.e. where building users will predominantly arrive or depart at set times, one credit can be awarded where the building occupier provides, or commits to providing a dedicated bus service to and from the building at the beginning and end of each shift or day. (BREEAM international NC, 2016. P- 197-198)

Application to the study area, Dhaka:

To achieve maximum number of credits, the following actions can be taken:

To encourage and reward a building location that facilitates easy access to local services and so reduces the environmental, social and economic impacts resulting from multiple or extended building user journeys, including transport-related emissions and traffic congestion.

There are two types of amenities for which the credits will be available for:

If it can be achieved in Dhaka, it will:

BREEAM is the world’s foremost environmental assessment method and rating system for buildings, with 200,000 buildings with certified BREEAM assessment ratings and over a million registered for assessment since it was first launched in 1990.

“The BRE Environmental Assessment Method, BREEAM, is a voluntary assessment method used to describe both new and existing buildings’ environmental performance. The method originated in the UK, but buildings built outside the UK can also be assessed using BREEAM: International.”(Building, 2018)

“Leadership in Energy and Environmental Design (LEED) is a green building certification system developed in the US by the US Green Building Council. It is aimed at improving a building’s environmental performance in areas such as energy savings, water efficiency and CO2 emissions reduction.” (Building, 2018)

“Green Star is an Australian environmental rating system launched in 2003 which was developed by the Green Building Council Australia [17]. The assessment tool was originally developed to accommodate buildings’ requirements in hot climates, where cooling systems and solar shading are considered as being of fundamental importance.” (Building, 2018)

Estidama is the first environmental assessment method developed in the Middle East especially in the Arabian Gulf countries.