How Does The Schroder House Relate To Its Cultural Context

How does the Schröder House relate to its cultural context?

“The greatest change that architecture has gone through in recent times has been its liberation, its separation from the plastic dimension… Architecture becomes an environment and nothing more. The result is that architecture has become less weighty, but at the same time much more functional and human. The buildings is no longer a thing that exists in itself or that stands for something; rather it is in active relationship to human beings and human beings will then have to adopt an active attitude towards it in order to be able to experience its qualities. (Gerrit Rietveld, 1932, Cited in Friedman, Alice T. 1998:80)”

The Schröder house is considered to be an ‘icon’ of the modern movement, a collaboration between the client, Truus Schröder-Schräder and Gerrit Rietveld, who studied architecture in the evenings after training as a furniture-crafter. Although it has probably been more reproduced than any other domestic building of the early modern period, its ‘modernity’ still seems quite startling. Today, there are many elements of its design which have been absorbed into Contemporary lifestyles and designs, such as its flexible open-planning (Anon, 1990:6). The Schröder house has connected to its cultural context over time, to the way many people live today. But during 1923-24 in Utrecht, Netherlands it was considered odd or ‘loony’ (as Schröder’s daughter Hanneke would describe it as) (Friedman, A.T., 1998:79). Throughout this case study, the following will be discussed; the house in terms of its ordering (and moving), design (and use) and its adaptability. 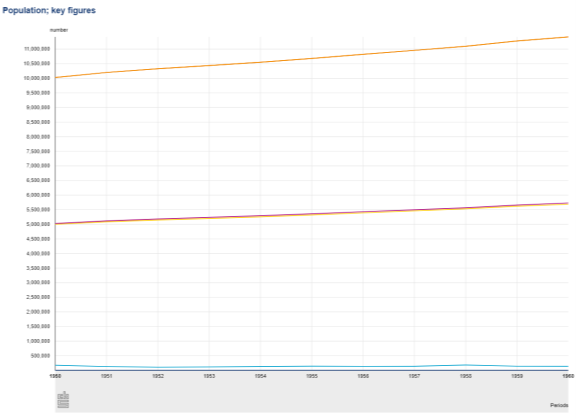 The time period in which the Schröder house was designed and built in (1923-24) was an era of prosperity and peace, with slow but constant economic growth and important constitutional reforms (after war destructions and hardships). This benefited many, allowing cities to expand fast, in the first half of the 19th century, Amsterdam had a population of around 200,00; this rose to over 500,00 in 1900 (see fig.1.) (Rijksmuseum, 2018). However, in terms of housing, new neighbourhoods were constructed in rapid tempo – providing homes for working and middle-class families such as Truus Schröder – a young widow and her three children. 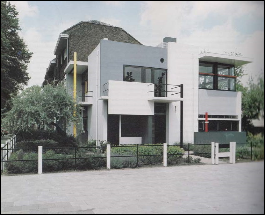 The layout and composition of the Schröder house is fresh and playful filled with bright coloured walls, as if it has been assembled from parts of a child’s building toy. However, Gerrit Rietveld has taken aesthetic inspiration from “Maison particuliere” and the “Maison d’artiste” by Van Doesburg and Van Eesteren (1923), which enables the user to experience free and open space, through mobile planes, moveable walls, and screens that gave the new architecture its distinctive character. Opening walls and enlarging windows eliminated the distinction between interior and exterior space, creating a house which was anti-cubic, asymmetrical, active rather than passive, with no dead space or repetitions. (Van Doesburg, 1924, Cited in Naylor, C., Contemporary masterworks, 1991:451). 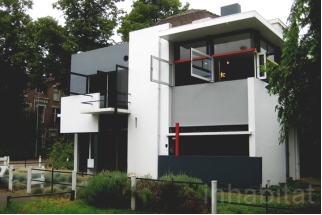 The front exterior of the property consists of symmetrical rectangular planes, that never meet at the corners but appear to be propped together in an elegant yet strangely precarious composition (see fig 2 and 3) (Friedman, A.T., 1998:65). Entering the house, the visitor is greeted by orderly built-in furniture and fittings. Directly opposite the door is the stair and a landing, leading to a large open space filled with light and colour on the first floor (see fig 4). The floors and walls consist of shiny rectangles (red, blue, yellow, black, grey, and white), which play off the clear light from the windows, creating a grid effect of shifting two-dimensional planes in a three-dimensional composition. One of the most striking elements of the house is its retractable wooden partitions (see fig 5), which are deployed along the yellow, blue, and red tracks in the ceiling, allowing the open plan space to be subdivided and creating a constellation of smaller spaces that serve as living/dining areas and rooms for the children (Friedman, A.T., 1998:66). The Dichotomy of work and home is clearly presented in the house as Schröder not only wanted to be closer to her children using an open plan structure, but she was also connected with her own social and political convictions of how an independent woman intended to live her life, during a time where it was the norm for women to be the ‘angel of the house’. Hence the partition walls to allow Schröder to have her own private office room to work from home, breaking away from those societal expectations. (see fig 6). 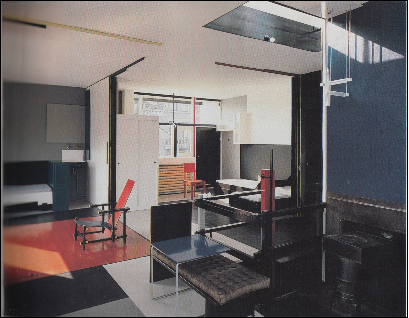 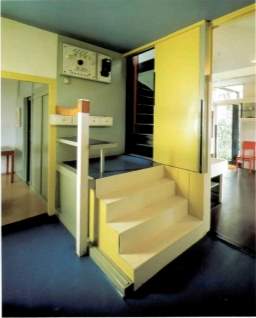 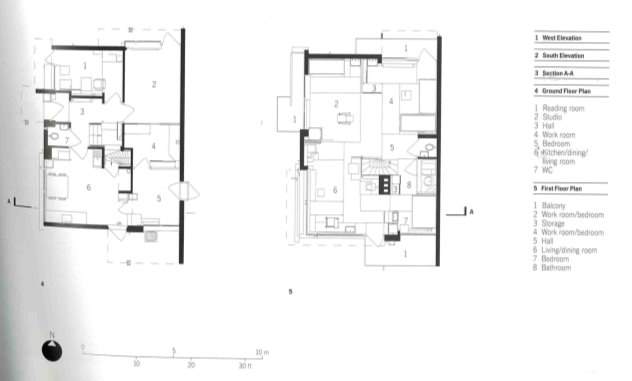 There was no conventional contract between architect and client; the process and design of the Schröder house was essentially a dialogue, the result of an exceptional architect-client relationship (Anon, 1990:13). Rietveld was never affiliated to a political party; his sympathies were socialist or communist (Küper, M., 2006:9). On the other hand, Truus Schröder was from a prosperous Catholic family in the east of the Netherlands, she was also married to a lawyer who later passed away (Anon, 1990:13). Their backgrounds were one of the main differences between Schröder and Rietveld, but this did not stop them from sharing the same vision (in terms of a more modernised design style). Thus, this enabled the Schröder house to be a success in terms of what the client and user Truus Schröder wanted/needed but also the architect Gerrit Rietveld and his style of design he envisioned to incorporate. Schröder continued to live in the house almost uninterruptedly until her death (in which the interior was reconstructed and opened to the public in 1987) (Anon, 1990:14) proved its success in liability.

The house was built of plastered brick because at the time reinforced concrete would have been too difficult perhaps to regard so modest a building as a ‘monument’ (Anon, 1990:15), which disclosed how small and low cost the house was but lacked luxury and concept. The use of concrete is limited to seven pillars that hold the first floor and roof and to the slabs that constitute the roof and balconies. The steel I-profiles that are visible on the exterior only serve to support the cantilevering balconies and roof (Naylor, C.,1991:451). However, contrasting the concrete, colour was an important element in the Schröder house. It is used more freely in the interior than the exterior where it complements the ‘ludic’ quality of much of the ingenious built-in furniture and labour-saving devices, creating a sense of joyful and confident modernity (Anon, 1990:19). Overall the house’s double personality – playful and carefree yet disciplined and moralistic – reflects the complex personalities of architect and client (Friedman, A.T., 1998:66). The unique nature of the collaboration between Rietveld, who had never built a building before, and Schröder, a well-to-do woman with strong ideas about how and where she wanted to live (Friedman, A.T., 1998:66)  successfully associated with its cultural context of the Schröder house’s architectural development and the understanding of the client’s requirements.

Stewart Brand once wrote that ‘architecture, we imagine is permanent. And so, our buildings thwart us. Because they discount time, they misuse time.’ (Brand,1995:2)’. It is suggestive of the importance for buildings to learn over time and with its culture. This closely resonates with both Rietveld and Schröder and how they envisioned the house as an opportunity to pursue their goals on a larger scale, of exploring the ways in which parts of a building could be shaped into a spatial environment that would stimulate people to live and think differently (Friedman, A.T., 1998:69). For example, the house was equipped with electricity, central heating and running hot and cold water, commodities which were not all self-evident in 1924 (Naylor, C, 1991:451), but are now common amongst many homes.

However, the house not only evolved with its owner (Truus Schröder), some of the experiments created there such as space-saving, built-in furniture and fittings, and flexible living areas influenced incorporation designs aspects into lower-middle class housing (Anon, 1990:15). Similarly, to one of Rietveld and Schröder’s next collaborations of the conversions of a large house in Haarlem into fifteen studio apartments for single working women in 1937-8 (see fig 7 and 8) (sponsored by the ‘Foundation for Flats for Women by Women) (Friedman, A.T., 1998:88). This project sought to make modern amenities and design available to the occupants, in a way the Schröder house did for herself and her three children, expressing new ideas about the nature of modern materials and moving towards a more modern architectural design. Therefore, rather than Gerrit Rietveld constructing something that would have been much more desirable and culturally related to its context at that current time, he considered beneficial designs that were much more adaptable for the future. 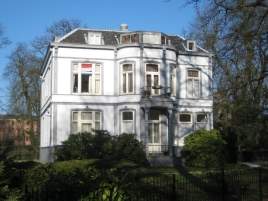 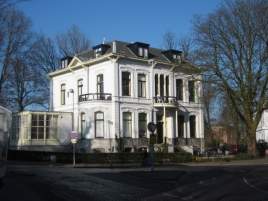 Thus, to conclude the Schröder house not only broke down the ‘norm’ boundaries it redefined social views of gender conventions through its unconventional designs (Friedman, A.T., 1998:88). However, this does not mean it is not suitable for its cultural context. In a time where it must have appeared to the public, visitors or neighbours to be a ludicrous house that avoided ostentation and traditional values of the prosperous Dutch middle classes. Its original conception was so strong and unusual that it continues to hold a message for the present of how modern architecture has grown to become. The Schröder house has been carefully considered for the cultural context over time, from its interior design and material used. Overall Gerrit Rietveld went beyond the familiar type of traditional home to suggest a new modernised model for a family house.