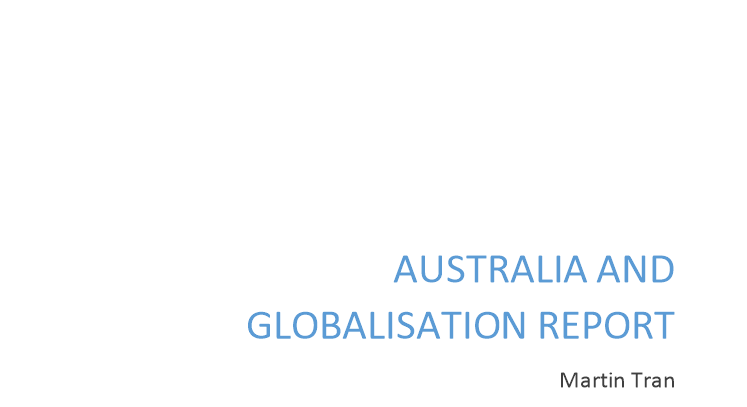 Globalisation is what runs the modern world now especially with the ever-increasing knowledge and advance in technology connecting the world person to person. With modern technology, two people on different sides of the world can talk to each other with instant messaging. In this way the world grows smaller, quicker and easier to live in. It’s not just technology that influenced globalisation, the current ability to have cheap, quick and easy global trade that has given everyone on Earth something not native to their country. As Australia is a fairly new developed country, it is moving away from being a colonised country, globalisation has helped Australia become a wealthier country. Is Globalisation a good thing for Australia? How has Australia been affected and where? This report answers that question. 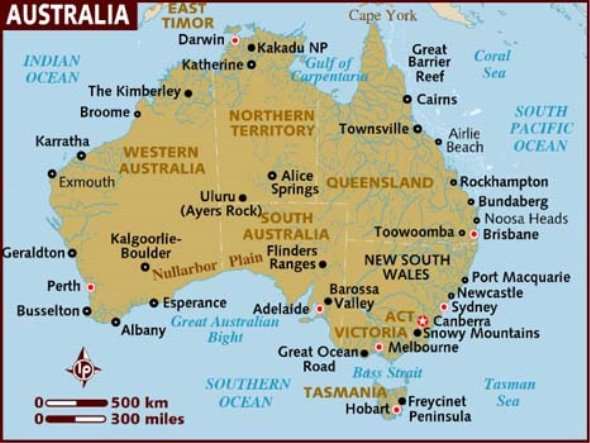 Australian society has expanded to the entire world with modern technology and networking. Australians can now communicate to people around the world in an instant using instant messaging and phone calls as well as the increasing number of international Australian citizens. However, what effect does this have on Australia?

Australia is a fairly new country and often receives information and trade products latest out of most other countries. However, the invention of internet and network has enabled Australians to receive information and retail quicker as well as speak with people worldwide. Australia is close to 3rd world countries and is a fairly cheap source of refuge and international education, this also makes Australia a place for refugees and international families hoping for a good education for their children. Australia is moving closer to the rest of the modern world.

With Australia slowly becoming more culturally and ethnically diverse, unwanted attention is being brought to Australia. The recent G20 meeting has started protests across the wealthier and poorer countries to stop G20 as it may separate the world and throw the economy off balance as well as raising awareness for world crisis and demanding for public needs. The public has also divided to challenge the governments to allow or ban refugees from entering Australia. When Australia allows refugees to enter Australia, people protests as the refugees may bring diseases, spies and war. When Australia sends refugees back then Australians protest to allow refugees in the country.

Australia has been mainly positively affected by globalisation in society, particularly in the tourist industry. Australia is one of the most unique countries for its strange geographic structure and wildlife. When tourist and refugees that have gained citizenship have seen the country that is Australia, The tourist and refugees will arrange for their friends and family to travel.

Involving Australia internationally was the right choice to make a good image other countries. Assisting in wars, attending casual and business meetings as well as just being there for a handshake has given off the image that Australia is a friendly country and a great continent…

Sometimes the Australian government forgets that there is such a thing as too involved. People have died in assisting international wars, several citizens live in fear of war being brought to Australia through involvement and asylum. G20 has scared off some of the poorer countries and some are taking advantage of the meeting and protesting for the world leaders to serve their needs.

Currently Australia has good favours with wealthier countries but connections with the poorer countries is rusty or unknown due to involvement. However, the country has benefitted from the government’s decisions, connections made and favours from Britain. Australia is also slowly getting wealthier, only a decade ago, people mainly drove cheap but practical Japanese cars but now expensive and better looking European cars are driving around the streets.

Australia has been isolated from other continents for billions of years and this has allowed Australia to hid it’s valuables until modern technology found them. Australia is rich in iron and coal and as the country itself doesn’t need it, all the raw materials are sold overseas. However, how much is used here and how much is bought from overseas?

Australia’s economy is focused on the mining industry and its exports. Australia exports mainly to countries with low iron, coal and gold deposits such as major Asian countries with fast development and requirement for steel. Modern technology has allowed for a year of mining to travel to overseas countries in less than two weeks by boat and about a week by plane factoring in the travel time from mine to port. Being a top exporter for mining products, this makes Australia a favourite for metal exports, most exports going to China, Japan, Korea and the United States. Apart from mining and gas exports Australian farming, medicinal chemicals and animal food products are bought by other countries and combined with all the other top exported products, Australia makes approximately $249 billion from raw materials.

As Australia is a developed country, everyone is trying to stay up to date with the rest of the world and imports computers, machines, parts and cars which are all new, always updating and very expensive. Cars also need fuel to run on so large imports of crude and refined petroleum are bought in plenty as well as medicine for Australia’s sick and injured. Overall, adding all the top imports together, Australia spends about $240 billion on imports, only about $9 billion of profit.

Australia spends large amounts of money on imports and leaving a little left for saving. Being a young country means Australia doesn’t have a good economic foundation to build on or much variety to offer. To keep up with the world, much has to be imported mostly computers and many different types of machines, all new and expensive. With $249 billion made from exports and $240 billion spent on imports, quite a lot of the products imported are used and not re-sold. Possibly the only time Australia made the most money was during the gold rush and the start of the microchip age.

Australia was an originally isolated country where people lived with and not off of the country until European settlement started and the coasts were over taken with modern technology. Was European settlement really beneficial for Australia? Was the old way of living for the indigenous the better way? Which way is better now?

Australia is mostly dusty red desert with dry deep-rooted plants, it is also where most of the most plentiful raw mining materials are. Australia is a country that can relate to District 12 of Panem, a country of miners. The desert of Australia is slowly becoming more unstable with the replacement of short-rooted plants, the dust storms of 2009 were caused by the combination of uprooted plants, bushfires, salinity and holes in the country for mining. People experience low visibility, possible blindness, dusty clothes, machines and houses. The dust was dumped all over Eastern Australia and the surrounding seas and coasts.

Too much has happened to the country that has not helped, the gold rush, introduction of wildlife and vegetation and general European influence from settlement. The way the indigenous Australians lived was a more peaceful and safe than the modern way of life where the more people rip up the land, the better for the people. Soon there would be nothing left for humans to live on and technology won’t be able to feed us.

Australia has mostly benefited from globalisation in terms of Social and political, however, the economic and environmental aspects are still in between good and bad…