To carry out the site investigation procedure there are 4 stages to do:

“Time spent in reconnaissance is never wasted”. The purpose of the desk study is to identify change in land use, via Ordinance Survey maps, Kelly’s Trade Directories and other historical publicly available records In addition to walkover survey. The history of the site and what it is used for and if whether if it has contaminated the soil and how deep it has effected it. Using satellite imaging, Geological maps, Topographic maps, Soil survey maps, Aerial photographs and existing site investigation reports.

Ground investigation or site exploration can be classified into two phases:

It is important that a geotechnical specialist or an engineer with knowledge and skills to document soil stratigraphy, their variations, and the existence of a specific circumstance to observe the progress of test holes advance. 1.5 m is the depth intervals that samples should be taken and sealed in plastic bags for transport to a laboratory for testing. Disturbed samples are derived from backhoe and air-track and auger drills. In addition, representative broken/disturbed samples should be collected to provide samples at 1.5 m depth intervals for laboratory testing in addition to get a well representative sample the following sampling-Disturbed samples & undisturbed samples- some methods are used:

Photographs can document the site and the drill equipment in work progress. In addition, it must be taken of representative disturbed samples and all soil and rock cores.

Boring and test pits afford definitive subsurface exploration. They can, however, be both time consuming and costly. In addition, they give subsurface conditions only at boring or test pit locations, leaving massive areas in between for which conditions must be interpolated or appraised.

Geophysical techniques, which are commonly used in highway work and in other applications, can be executed faster, less expensively and greater area can be covered more thoroughly, however, obtaining soil samples are still required from which precise determinations of soil properties can be made in order to verify and complement result obtained by geophysical methods.

Resistance of soil to movement of an electrical current is determined. Using values obtained therefrom, the depth and thickness of different soil strata can be interpreted by specialists and estimated, with the aid of additional borings, some of the engineering properties of the subsurface material. 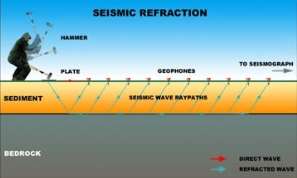 Laboratory tests to obtain key properties of the ground will be adequate in the majority of geotechnical site investigations. The index properties will be obtained by means of:

Laboratory testing for engineering properties may be required for large buildings on complex circumstances of the ground stratigraphy. The types of engineering tests that may be conducted are consolidation, and less likely, creep strength and thermal properties tests.

The key issues that should be noted shall be:

b) Characterize the site so that surrounding conditions that may influence the design and performance of the building footing are understood and designed for;

c) The projected end of the building service life State the present and, climate and ground temperatures;

d) Classify the soil strata according to recognized Euro code and BS, based on quantitative laboratory results;

e) State the significance of the stratigraphy established by the test hole program, measured ground temperature and the impact of climate warming rate on the recommended building foundation design(s);

f) Identify foundation options proper for the proposed service life of the building; and

The requested terms of the investigation are the main specifications that the content of the report depends on, the magnitude and difficulty of the structure, and the site condition. Hence, contents and detail of the reports may contrast. The outline provides general contents based on literature and the writer’s experience.

Structure information/necessities and building engineering design that the architect/design engineer provide. Testing and classification of the soils should be based on internationally recognized criterions. Engineering properties and foundation design requirements to take into consideration the service life of the proposed structure and the potential impact of climate warming. In addition, should contains the following:

It is suggested that the report is prepared to provide information to the property owner, architect/design engineer and the contractor. As such, the introduction should make sufficient reference to:

The background provides the physical situation of the project and should include:

Detail of the structure guides the extent and detail of investigation. Thus, the architect/engineer should provide the information.

Technical detail of the proposed structure, for instance, single or multi-story, plan area, above ground, slab-on grade, or with basement.

Overview of the site as provided by geomorphology and bedrock geology obtained from previous investigations and published information.

Description of surface features of the immediate site that should include topography, vegetation and neighbouring structures.

Water existence and surface flow may affect the design of surface grading and effect the ground temperatures. 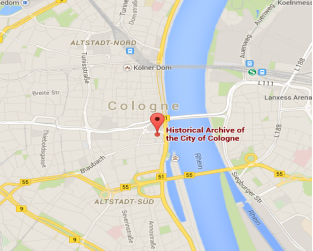 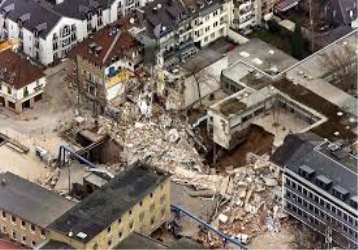 On 3rd of March 2009 at 13:58, the archive building collapsed (The archive was Germany’s largest municipal archive, and the only one to survive World War II intact). Two adjacent apartment buildings also collapsed, killing two residents. The Cologne Historical Archive, suddenly disappeared into a cloud of dust and a pile of rubble. After the sounds of buckling began, archive staff and visitors had enough time to escape the building, but its vast historical holdings did not prove as fortunate. Flooding into the building pit was noticed that water. The building workers rapidly warned the staff and visitors of the archive, who evacuated the building. Shortly subsequently, the archive building collapsed as a result of an underground landslide hooked on the subway tunnel.as shown in the picture below: Google map for the collapsed building location

Two people were stuck under the debris and on person was thought to be missed. The disaster has left residents in the city, shaken and angry. A nearby school remains evacuated and apartments next to the archive were also sucked into the 28-meter sinkhole. Many locals were afraid of the next accident. The collapse also heavily damaged several surrounding apartment houses as well. The heaviest part of the tunnel construction was supposedly completed 1-year earlier, but the tunnel floor had not been finished. The tunnel and station has been a controversial project in Cologne, with problems occurring as early as 2004 when a church steeple began experiencing tilt of 77-cm, greater than 15 times what was predicted.

After the starting of new underground tunnel work many problems has been observed by residents and building workers such as an expansion joint in the concrete ceiling, in which a crack the size of a hand had formed, cracks in the flooring in the basement boiler room and that the tower of St. Johann Baptist Church leaned by 77 centimeters–15 times greater than what had been previously calculated. From the aforementioned examples successive events in Cologne city, the main reason of collapsing of the city archive building can be obviously concluded, which is insufficient bearing capacity of the soil to carry the loading of archive city building and some surrounding apartments after constructing the new tunnel in addition to some side factors which caused loosening of the ground and cavity formations that was inevitable in some areas.

Witnesses who were close to the investigation commented that the tragedy was likely caused by ground water seepage “The whole thing points to an issue with the ground water,” at the construction site may be related to rising levels of the Rhine River, which is situated very close to the collapsed building.The stability and deformations of tunnels can be affected by water by decreasing the effective stress hence reducing the resistance to shearing stresses, by producing seepage forces towards the excavations borders. Drawdown of the water level and to time-dependent subsidence can be caused by the seepage-flow may due to consolidation. Moreover, the seepage forces may act towards the opening may weaken its stability. The effects of groundwater in tunneling are ramified. Throughout tunnel excavation in a water-bearing ground, seepage stream in the direction of the opening occurs, because the pressure at the excavation boundary is, in general, equal to the atmospheric pressure and the tunnel acts consequently as a groundwater drain. Drawdown of the water level can be caused by seepage flow, to decrease in the discharge of walls, or to settlement and consolidation. Beyond these- in the broader sense- environmental influences such as rising levels of a River, which is situated close to the tunnel, large water inflows may have a severe impact on the serviceability throughout its operation phase or obstruct excavation works. And that’s what happened to the soil underneath the city of Cologne archive building where, the seepage which caused by rising levels of the Rhine river especially in that period of the year lead to weaken soil which is unable to carry the loads and that made the soil to fail and collapse the building to come down in a big whole,throughout collecting and analyzing the collected results, combined with the particular circumstances of the project, it can be summarized that the joint at the interface are of layered rock damage resulted from the groundwater where it is the main internal cause of the tunnel failure. 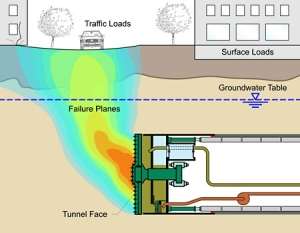 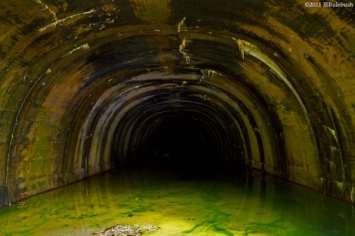 The local tests of the soil around the city archive had only been conducted before the city made the tender offer and prior to the beginning of construction on the underground line. There were no subsequent soil tests once construction work had started. The city followed the standard procedure, so the first recommendation is the standard procedure should not be always followed but following the standard until specific limits depending on the project and other circumstances. In addition to sufficient reinforcing the potential weak soil spots during the tunnelling work For instance, during the construction of a tunnel, flash-hardening bentonite rings must be always directly put in its place. Moreover, never left a hollow that could pull in the adjacent ground. Most of accidents can be avoided if more care is taken and fully understanding for the data collected from a very good site investigation and what to do according to it.

In addition to that, for the tunnel situation, the groundwater level should be monitored and using different methods to control the seepage and consolidation of water in the tunnels, which lead to distract the construction.

To sum up, the ground investigation is a long process and takes a long time and it costs about (Buildings 0.05 – 0.2, Highways 0.2% – 1.5%, Dams1% – 3%) of the project cost and it saves up to 100% of the project and save human life and invaluable things such as the invaluable historical documents.

Most of tunnels collapse accidents are resulted from the problems related with the ground water. 90% of collapsing accidents can be prevented by a good site investigation by an experienced team in this field.