To what extent is globalisation an enhancer of culture?

Culture is a way of life unique to a certain set of people; cultures are usually national but can also be present in local communities and on an international scale. Often the term ‘culture’ is misunderstood. To some it may mean traditions that have been passed down through generations but to others it can represent simpler things such as the area they live in or even the language they speak. Culture in itself is not easily defined because of its ever fluctuating nature. No two cultures are identical but some are more similar than others. Globalisation is a term used to decide the many ways in which people and places are becoming ever more closely linked[1]. Globalisation has had a massive effect on culture both historically and in recent times. New cultures deep in the heart of India and South America are being contacted, opening up a huge range of potential investigations. While on a less dramatic scale the trading world between different cultures has become hugely important and is aided greatly by how easy it has become to trade on a global scale now thanks to leaps forward in technology, transport and communication (see table 1). Trade is often interpreted as the exchange of goods but it can also facilitate the interconnections between cultures. This is evidently present in how many American companies have moved workers into the Far East to places such as India or Vietnam.

Though I have been talking about how globalisation has affected our ability to communicate with other cultures in recent times, it has been around for a long, long time. When Christopher Columbus set sail in search of Asia[2] and discovered the West Indies and made the civilised world aware of the Americas, he participated in the globalisation of the cultures of the indigenous people on the islands as he made the world aware of their existence for the first time in their history. This was obviously a huge leap forward for globalisation as it set off a chain of events that would eventually end in America being one of the biggest economies for trade and best educational facilitating countries in the entire world.

Culture and globalisation are two very contrasting ideas. A culture new to the idea of globalisation may be worried about whether its way of life will stay sacred and individual to them if the rest of the world has access to it.[3] This is a very legitimate fear and can very easily be construed as an invasion of privacy. Although when looked at from a more international perspective you can see that you can learn from other cultures. Very similarly to the development of language, a way of life can be studied and can often add to your own culture as many medieval countries did to provide the languages we speak in the present day.

The main cause of globalisation is the ‘western’ world attempting to spread their culture into different corners of the earth. A great example of this is the coffee chain ‘Starbucks.’ Starbucks was founded in 1971, gaining mainstream success around 1991. Since then it has had exponential success with over 20,000 shops worldwide.[4] It is now a firm stalwart of the American Culture. Though Starbucks itself has not always been part of the culture we know today there have always been coffee houses in popular culture although they were initially confined to the USA. Starbucks has introduced a whole new ‘coffee-house’ concept by becoming a multi-national company. Originally just an American chain it has spread rapidly, becoming popular in Britain and is becoming a growing phenomenon in South America.[5] This may be both a problem and an advantage for these countries, for example Peru is one of the South American countries being affected by the so called ‘Westernisation.’ It has a 9% unemployment figure (almost one million eligible people out of a job).[6] The opening of new American and British chain stores will provide much needed jobs that will boost their economy as well as providing a stable income for them and their people. On the other hand much small business owners would be ousted by the competitive pricing from these big profit organisations setting up franchises in some Peruvian cities. Traditionally Peru has been famous for incorporating many small businesses into urban areas and Starbucks would be potentially devastating for some of these places. Peru is a nation with many young dependents, indeed 29.1% of the population aged between 0-14 years[7]. This may mean that more jobs available in a stable working environment may not be so bad for the young work force in South America. When more young people are in employment more money is pumped into the economy, which enables the country to safeguard and preserve it’s own culture such as traditional shops and the upkeep of nationally important monuments.

But is globalisation inevitable and perhaps instead of safeguarding our cultures we should accept it and take whatever positives it may bring.

This quote from Kofi Annan outlines the view that however hard you fight it, globalisation will always present itself to you using the analogy of gravity. Perhaps this can be linked to the fight that several rural cultures in India and South America are having to avoid any contact with civilization[9]. It may show that perhaps instead of wasting energy fighting a losing battle they should embrace the change. We can help them understand useful medical techniques and educational strategies while they may help us understand their culture and learn their own unique ways of dealing with things such as medical emergencies.

On a national scale (UK) and at a more local perspective it is clear that there is an ever larger influence of Polish born immigrants affecting my local area. This is shown to great extent by this graph:

This shows how the population of Polish born immigrants living in the UK has swelled massively from under 100,000 in 2001 to over half a million in 2010. This has been analysed in part by a report by Ian Duncan Smith in a report (February 2013). It shows some surprising results. It states that immigrants from other nations such as Romania and Bulgaria will have nines times more money in England on a minimum wage of £543 to take home to an average family of two children every week compared with £62 back home. Of course living costs will be a lot less in some of these Eastern European countries compared with Britain. It is also said in the report that these immigrants from Eastern Europe will have twice the ‘economic incentives’ of the Polish immigrants.[11] This is quite a daunting figure as we can see how much success Polish immigrants are having in the UK, this may encourage more and more workers from Eastern Europe to find a better life here.The reason I find this daunting is because of the population figure that has been forecast. It suggests that up to 250,000 Romanian and Russian immigrants could move to the country in the next 5 years.10 While it is also forecast that the population of Britain could grow by more than 10 million in the next 25 years.[12] With resources and services stretched to breaking point as it is another 10 million extra people in the country may not be best for our future. Of course, globalistation results in positive diversity in local commmunities but may cause services to be stretched, resulting in potential animosity between existing residents and new arrivals.

To understand a broader picture of the affect of globalistaion on culture we have to look at a national scale example. The country in my opinion that has been changed most dramastically by globalistaion in recent years must be The United Arab Emirates. 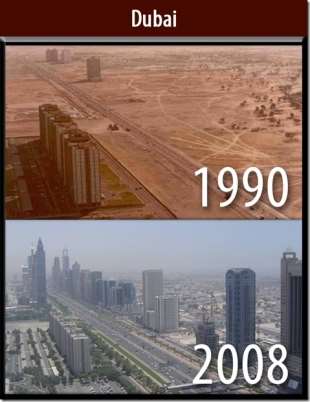 [13] This is a stark contrast from 23 years ago to 5 years ago. After being established in the 18th century as a small fishing village it began to expand after the discovery of oil in the area.[14] Globalisation put UAE firmly on the map, moreso given the importance of oil to almost all developed nations. But what do people think about this? A young man studying in Canada that was born and brought up in the UAE has noticed that social values that play a huge part of modern society in the west are nothing like those in the UAE.[15] This is surprising as the globalistaion shown in the UAE is heavily influenced by the west so one would expect the social values such as letting someone with right of way pass in the street would also be passed into UAE culture so obviously globalisation has not affected every aspect of life in Dubai and the UAE.

Table 2 below considers the future ‘what –if scenarios of globalisation

But can our cultures be preserved, should they be? In a world of ever growing globalisation we have to find more and more ways to preserve our culture. Obviously there are aspects of ever culture that should be preserved, for example the way in the UK they remember the fallen heroes of war every November 11th and in the USA on the anniversary of one of their greatest national tragedies 9/11 they remember and honour. On a lighter note festivals such as China’s New Year’s celebrations are a thing definitely worth preserving. But should all cultures be preserved? Should uncontacted tribes still stay away from civilistaion or should they step into the new world? New advances in the world may aid them greatly but also may be too intimidating and would be incredibly derogatory to their development. Globalisation may harm the development of some un-touched civilisations by introducing them to the new danger of world affairs and in some cases ignoring the on-rushing tide of globalisation and leaving these civilisations and other countries in the world to their own devices is sometimes a larger step towards preserving culture than presenting it all over the globe could ever be. If your culture such as Ireland’s famous bars are now scattered all over the globe can they be construed as your culture any longer or have you lost that national identity to globalisation? My final thought is this; though globalistion can help with exploring the great depth and wonder of the world, being conservative in where you ship your culture to is the greatest tool of preservation.