The rubber tree is the most important source of natural rubber. It is constantly under threat from various pathogens that cause severe diseases like abnormal leaf fall, Corynespora leaf disease, brown root disease, and pink disease and Colletotrichum leaf disease. Leaves alternate, palmate and each leaf with 3 leaflets. Leaflets elliptic petiolated, with a basal gland, pointed at the tip with lengths varying up to 45 cm; glabrous, with entire margin and pinnate venation. (Orwa, 2009) 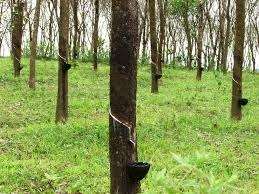 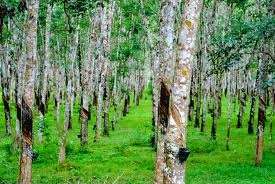 Pink disease is a disease that affects the stems and branches. The disease is named because to salmon-colored, scattered or coalescent pustules and corticoid basidiocarps that are formed on the branched or stem of trees in advanced infections. Usually, it is most serious disease in the young rubber trees. The best development of this disease is during monsoon period which is wet weather and high humidity. Barks become cracks and the girdling cankers develop that causing death of branches above the cankers. (P. J. Keane, 2000) 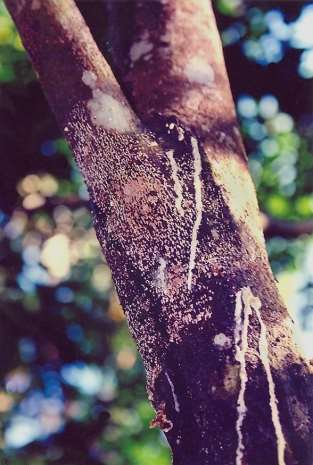 The organisms that caused pink disease in the rubber tree is fungus. This fungus is known as corticium salmonicolor which causes the death of branches. The fungus produces four distinct rowth forms on the stems and branches, namely “cowbed”, “pustule”, “necator” and “pink encrustation” forms. In the stage of cowbed superficial arachnoid mycelium is appearing. Then celluar tissues are appear in the pustule stage. Conidia or sporodochia occurs on nector stage. Last basidiocarp stage in the pink hymenial encrustation.

Pink disease is the most serious stem disease of affecting mainly the young rubber trees. It is observed during the monsoon period. Wet weather and high relative humidity are favorable for disease development. The stem with brown bark is affected anywhere from the base to branches. In young plants the forking region is more vulnerable. The early symptom of infection is the superficial growth of mycelia which resemble cobweb and glistens in sunlight. The mycelium grows covering all around the stem, ramifies the bark tissue and damages it. When the pathogen damages the latex vessels, the latex exudes and the affected bark gets rotten and dries up. When the bark rots all around the stem translocation is affected. The leaves turn yellow and dry up. The dried leaves remain attached to the branch. New sprouts develop from below the affected region. When the infection progresses light pink coloured pustules appear in parallel lines all over the bark. Orange or red pustules develop on the portion exposed to sunlight. These contain the spores. In the advanced stage pink encrustations appear on the lower shaded regions of the affected branches. The disease gets its name from this stage. The pink encrustations contain the basidia of the fungus on which basidiospores are produced. During dry weather the mycelia remain dormant and became active when the favorable season returns (Thomson, 2010).

Pink disease is considered as the most damaged stem disease of the rubber tree and seriously affected to other countries include New Zealand, New South Wales, Australia, southern Japan and Brazil.

In Brazil, the disease on eucalypts was described by Ferriera and Alfenas which pathogen that cause disease economically important stem and branch cankers on many eucalypt species and has limited the use of some clones of E. grandis or hybrids. The main damaged is death of the leading stem and breakage in the vicinity of canker lesions (P. J. Keane, 2000).

CONTROL METHOD AND MANAGEMENT THE DISEASE.

Management of the diseases of rubber is very important. Some management options or disease control interventions are listed in this lesson. An integrated approach to managing or controlling such diseases is suggested. It must be pointed out, however, that a thorough land preparation and sanitation employing the recommended practices assure a practical approach to crop protection. Cultural (thorough and clean land preparation or sanitation and maintaining a clean nursery or plantation, proper plant density, weeding, Mucuna bracteata cover cropping, irrigation).

One has the option to control or manage diseases in many ways, through any of the following methods done singly or a combination of any two or all methods done in integrated approach

Rubber plant that has attack by pink disease usually control included in practices pruning of affected limbs and treatment with fungicides. In order to reduce the silvicultural practices, especially the removal of affected trees aimed at reducing the sources of inoculums within the plantation and the planting of resistant species. In this regard, C. torelliana and E. deglupta have found to be the crops more resistant to the pink disease than E. grandisand E. tereticornis. Differences were found between species and proveness in responses to toxins in the filtrates but the relationship of the responses to susceptibility to disease in the field was not established.

The distribution, hosts, and mode of action of Pink Disease are described and its importance as a disease of plantation rubber is emphasized. The various forms of Corticium salmonicolor are described. It is pointed out that the fungus is not a typical Corticium and that the pink incrustation is very frequently sterile. Corticium salmonicolor often affects the wood as well as the bark of rubber trees. Its action on the wood is described in detail. The formation of tyloses appears to be a response to the presence of the fungus in the wood. Pure cultures of Corticium salmonicolor have been established on salep agar and on Hevea wood. Inoculation experiments both with natural material and with the fungus grown in pure culture have been successful. Treatment, Spraying is not recommended except in particular cases, The disease is best dealt with either by cutting out infected branches, or by treating affected parts with tar (F. T. Brooks M.A. And A. Sharples, 2008)

Agro marketing (2014, may), Diseases in Hevea. Retrieved from website: http://www.agromarketingindia.com/diseases.html

Diseases of Rubber and Their Management (2014, may), Management/Control Measures. Retrieved from website: http://www.damrdp.net/eLearning/Rubber/lessons/module07