Is Globalisation affecting our lives for the better?

Globalisation is not a new concept; early explorers went off in to the unknown and came back with exotic foods, sports and fashions that were unheard of. People of the UK eat potatoes on a daily basis, but they aren’t even British! However, the advent of internet technology and low cost air travel have given globalisation prominence. Globalisation refers to the increased inter-connectedness of the world and how the world is getting smaller (well, metaphorically speaking). Globalisation is now reaching out and touching the lives of an increasing amount of people around the globe. Consider your own World for a moment – how is your lifestyle affected? The car in the garage, the food in the kitchen, the phone in your pocket, the clothes on your back or the computer you use? I myself have had my lifestyle greatly influenced by globalisation. My iPad, Xbox and video games all are either manufactured or created in another country and shipped to the UK. Indeed, many of the TV programmes I enjoy are also produced overseas. This shows that our world has become increasing connected and interdependent in terms of culture cuisine, fashion and technology. But is it a change for the better?

The cause of globalisation can be linked back to a few main changes. Firstly the improvement in air-travel throughout the 20th century has resulted in a vast increase in the amount of movement of people and goods between countries. Graph 1 shows that between 2000-2008 the volume of exports in developing countries doubled, most likely due to the easier access and advancements of air-travel and transport. Everything from food to technology can be produced in a different country and then flown to us. This in turn has allowed a greater sharing of cultural ideas. Secondly, the development of communication such as the internet and mobile phone technology has meant that it is easier than ever for people to develop and share their ideas. It allows someone with a computer in Britain to access information published in another country or find out about other cultures without having to visit the country. This has allowed a larger spread of cultural information and ideas. Map 1 depicts the amount of internet users in the world, by country. From the map, I conclude that the internet has become a revolutionary tool in the spreading of culture and information. The main users appear to be Asian nations like India and China. As these are large developing nations with large populations, it is not surprising to see that a large percentage of the population use the internet. As you can see, there is also a positive correlation between population size and number of internet users. 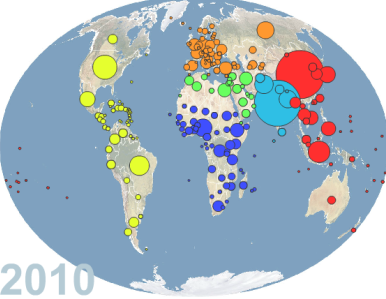 Another reason for globalisation is the creation and growth of Multi-National Companies. As of 2009, there were 889,416(3) globally, meaning there are a lot of companies with branch plants in multiple countries. The most famous examples of MNC’s are Coca-Cola, Apple and McDonalds. Each of these MNC’s has factories, offices or places of business in countries all around the world or they sell their products to millions around the world. The fact that so many exist, show how interconnected we all are and that many peoples’ lives and cultures are influenced by these expanding companies. Global trading blocs have further reduced national barriers, for example the EU as has the growth of a global media.4

Table 1: Globalisation – the good and the bad

The sharing of information has meant that for example, an event occurring in south East Asia can be known about quickly or instantly in countries like the UK. Thus allowing NGO’s to get accurate information about what happened and be able to use facts when asking for donations. A good example of this is the recent Typhoon Haiyan in the Philippines. Due to the internet and other communication technologies, news of the event was instantly available to other countries and this allowed them to act accordingly. This rapid sharing of information has led to problems like global warming and conflict in overseas nations being more well-known and for people to call for more action to be taken.5

Many critics claim that LEDC’s do not receive many benefits of globalisation and are only used for their cheap labour and resources. This therefore creates the effect of ‘the rich get richer and the poor get poorer’ in many peoples’ eyes. The most well-known examples of this are MNC’s like NIKE, Apple and Primark who mainly locate their manufacturing operations in newly industrialised countries. They often move to a country with cheaper labour if costs begin to rise or get too high for their liking. To add to this, some MNC’s take little care of the workers or areas they set up their operations in. The news is often filled with stories of sweat shops, terrible working conditions or other poor ways of treating the area. The case study of Coca-Cola in India shows how well known and respected MNC’s can ‘exploit/take advantage of the countries they operate in. 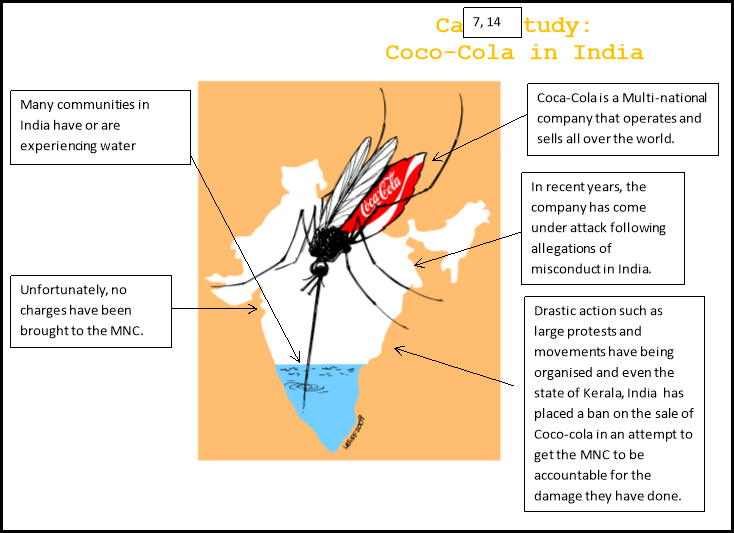 Anti-globalisation campaigners and those who oppose/disagree with globalisation believe that clothing, language, diet, tradition and other cultures are being destroyed and re-shaped into a more capitalist or westernised style. A prime example of this that American TV programmes or movies are more likely to be a worldwide success than those of other countries like India, which also have large media industries. This perhaps accounts for the term ‘Bollywood’, whereby Indian entertainment/film makers are using a globally renowned place name ‘Hollywood’ to raise awareness of Indian film.

Many people have an opinion on globalisation, be it an MP in London, a business man in China or a villager in Kenya, Africa, probably because globalisation is wide reaching. These perspectives often differ depending on who you ask. Kofi Annan, views globalisation as a positive phenomenon. Kofi is a Ghanaian diplomat and part of the UN9, he has seen the world and dealt with many situations involving other countries. Therefore he clearly knows what he is In terms of culture, Mr Annan seems to believe that globalisation has benefited the different cultures of the world and now better from having had other cultures interact with theirs.

For my local area, globalisation has had a very positive effect. Globalisation has led to an influx of culture such as film, food (Chinese, Indian and Thai) and the creation of hundreds of jobs and has brought several big Multi-national companies to Telford. MNC’s like RICOH employ about 900 people10in Telford alone. Ricoh Company, Ltd is a multi-national imaging and Electronics Company based in Japan. It was founded in 193611 and opened its Telford branch in 1987.12 Its Telford branch manufactures cameras and projectors, all of which are sold either in the UK or shipped abroad to other 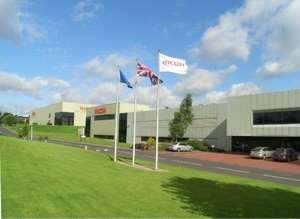 countries for sale. And this isn’t the only MNC in Telford. Companies like ENTA (Taiwanese) and Johnson Controls (American) all have factories in Telford, providing products and employment for the local area. If globalisation hadn’t

happened, the unemployment rate in Telford would be much higher. Therefore my local area has benefited quite a lot from globalisation, be it in employment, products or services, and perspective on the subject is positive.

In terms of scenarios for globalisation and culture, there are but two; a scenario where globalisation extends its influence and a scenario where it recedes. If globalisation were to extend further, it will mean fewer areas of the world remain untouched. This could have massive implications for culture in both MEDC’s and LEDC’s. For MEDC’s it would mean greater access to products or ideas from other countries. This however, may not affect the culture of MEDC’s like the UK a lot; mainly due to MEDC’s being “multicultural” societies and the influx of more culture will simply expand the already dynamic range of culture in these countries. But in terms of work, shops and services it is a different story. By allowing more MNC’s from other countries to enter, the prospect of more jobs, services and products increases. Consequentially, it also increases the risk that local businesses will have to close or go out of business. In 2012, the UK saw almost 4,000 shops and 54 retailers close up and go online or go completely bust, affecting more than 48,000 employees15. This shows that even though globalisation brings lots of benefits it can destroy traditional or small local businesses. For LEDC’s an increase in globalisation could be either good or bad. An increase in globalisation could bring more MNC’s to a country or area and with it, benefits. But it could also bring negatives like exploitation or damage to the environment. The local areas culture could be seriously affected, as they replace traditional dress with MEDC style clothing or food, like McDonalds or Coca-Cola. This can be a good thing but it would destroy or significantly weaken local culture and could eventually disappear.

The other scenario, where globalisation recedes, provides a very different picture. If fewer MNC’s exist in other countries surely countries would become a bit more ‘self-sufficient’ (being able to do it themselves). For an MEDC, this would mean many aspects of our lifestyle would go or more likely, be harder to come by. Books, movies, foods (Eg: bananas) and clothing would be harder to get as there may be fewer companies willing to ship them to the countries which want them. This could mean that MEDC culture changes, as the lack of foreign products or ideas means that a specific MEDC culture could develop. For local business, it means that more people may use them instead of bigger companies, essentially increasing their usage and profits. For LEDC’s, this scenario would seriously affect their culture. As the media shows us every time they are in LEDC’s like in Africa or the Philippines for example, every day people seem to wear t-shirts, shorts or other similar clothing branded with MEDC MNC logos. Now, without globalisation, this sort of clothing would most likely become harder to acquire. This can be both a good and a bad thing. It’s a good thing for the LEDC’s culture as it allows them to readopt traditional clothing or move away from MEDC influence. It can also be a bad thing as they may rely on these clothes and without them may not have any at all. Another way that LEDC’s would be affected is that with less MNC’s in their countries, fewer jobs may be available to the people living in LEDC’s. This could have a negative effect on the economy of LEDC’s which rely on MNC’s for financial income and jobs. Moreover, less MNC’s would mean workers and communities in LEDC’s would not suffer from poor working conditions or other MNC related problems.

In conclusion, I have been able to identify that globalisation is mostly affecting our lives for the better. It facilitates the sharing of ideas, knowledge and culture, which in turn has allowed the world to become more interconnected and shared. However, this is not always a good thing, as globalisation has been, and still is, responsible for exploiting workers, damaging environments and eroding cultures. From my evidence and research, I have found that globalisation causes more harm in LEDC’s than in MEDC’s. In MEDC’s, globalisation brings more positive effects than negatives and people in MEDC’s seem to have adopted it into their lives. In the future, it would be good if MEDC’s could ensure that the benefit they gain from globalisation in LEDC’s is fully and fairly reciprocated