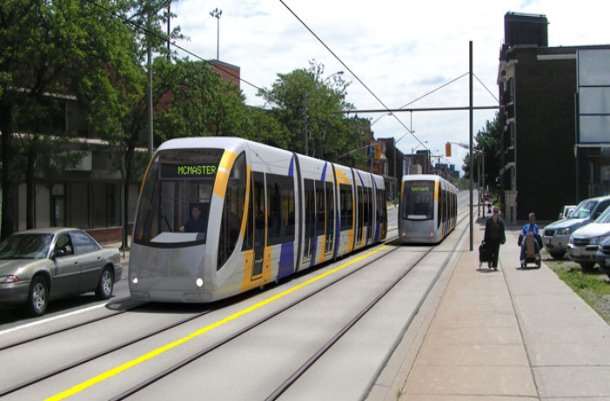 Integrative public transportation is critical for any metropolitan city, and Hamilton is by no means an exception. Transportation is a key issue in Hamilton and a sustainable transportation system such as the LRT system is the answer to the congestion problems. The LRT system is more than just moving people from place to place. It is about providing a catalyst for the development of high quality, safe, sustainable and affordable transportation options for our citizens, connecting key destination points, stimulating economic development and revitalizing Hamilton (Daily Commercial News, 2014). By planning and implementing an LRT system with an eco-friendly focus, it is indicative of a community oriented city. An LRT system would have a positive influence in terms of economics in the city, by attracting new businesses and increasing investment. On top of that, the environment would be better off as there would be less congestion and pollution. An LRT system would contribute to the ability to provide the city with a better image by being cleaner and more modern. Currently, Hamilton is highly dependent on automobiles and by designing the city around rapid transit systems; it can connect many destinations together. The purpose of the project is to provide the citizens of Hamilton with a better economic, social and environmental quality of life (Hamilton Rapid Transit, 2010). Downtown Hamilton is a massive economic center and employment cluster. Many Hamiltonians actually have occupations in Hamilton, and it is clear that the priority should be improving the transportation system and in particular the speed, consistency and the quality of Hamilton’s transportation system. Therefore, it is evident that Light Rail Transit will revitalize the urban neighbourhoods, attract new investment, improve air quality and reduce the congestion of cars in Hamilton.

Downtown Hamilton is without a doubt an attractive destination for a variety of attractions and businesses. Therefore, it can be very beneficial to build a Light Rail Transit system that travels through downtown. There needs to be a lot of thought and consideration when constructing potential stops within downtown Hamilton, as the LRT needs to take into account on how to best increase citizen access to places of employment, residential areas, and key municipal services. The three proposed stops were chosen because of their proximity to major intersections, where vehicle and pedestrian traffic is quite high. Many would view the intersection of King Street West and Macnab Street South as a great location for a stop. However, upon doing more research it is evident that this location is not a critical stop because there is too much car and pedestrian congestion. To build a LRT stop in this location at the heart of Hamilton’s downtown core would mean months of road closures and construction. This would result in negative impacts to any businesses within this radius. Additionally, another location that was rejected was Cannon Street West and Macnab Street South. This location was rejected for the reason that it was too close to our third stop at Cannon Street West and Bay Street North. If we put a stop at this location it would defeat the purpose of the LRT of being a faster and more sustainable way of transportation for the citizens of Hamilton. In this case it would be like a bus making frequent stops every few blocks. Additionally, this location has little pedestrian traffic, little lighting, and no businesses or buildings around. Therefore, this location would defeat the purpose of the LRT and reducing congestion. Another poor stop location would be at the intersection of Cannon Street West and Hess Street North. At first glance, one would think this would be a great location for a stop due to the area being populated on weekends and weeknights. However, this area is populated with a younger demographic of mostly students, and a few substantial issues arise. Since the primary demographic in this area is younger citizens that are perhaps more immature, this could result in problems with people abusing and not respecting the LRT service. In turn, some people will avoid the LRT system as a whole and not take advantage of the system. Overall, these stops are best to be avoided as they will provide minimal benefit to the citizens of Hamilton.

Following the analysis of a few routes, it was chosen that James Street North would be the primary street for the Light Rail Transit system to travel on. Bay Street North was rejected for the primary route as it is a one way street fromAberdeen Avenueto Cannon Street West. Additionally, it has only two lanes with many large parking lots running alongside and with the Hamilton Court House taking up a major section along Bay Street. Bay Street is not suitable because past King Street West, there are minimal amounts of pedestrians which are critical to the LRT systems effectiveness. By moving a few blocks East to James Street South, this presents a much more logical location and opportunity for the LRT System to be situated. This location would provide the necessary social, environmental and economic requirements to make the LRT system as beneficial as possible.

There are many advantages with the proposed route, but in particular stimulating Hamilton’s economy is one of the biggest benefits of the LRT implementation plan. The construction of the LRT itself would potentially create 6000 jobs, while the operation and maintenance of the system would create over 1000 (Hamilton Rapid Transit, 2010). In addition, since the primary street for the route is James Street, this will provide a faster and more efficient mode of transportation for the people living in this area. On top of that, it would potentially bring more customers to small businesses throughout Hamilton, and in particularly on James Street. Overall, real estate value of those homes situated near the LRT system in Hamilton will also increase as a result (Higgins, 2012).

This particular chosen route has many positive impacts on the surrounding neighbourhoods around the downtown core and in particular, greatly benefits the day to day living conditions of the residents living around James Street. A major advantage of this route is that it travels directly through the area which is known as the, “code-red zone.” Maps show the neighbourhoods in close proximity of James Street as being below the poverty line (“Code red: Mapping,” 2006). An LRT route travelling through the area would see real estate values increase; and a domino effect will follow and encourage more construction building and investment into developing the downtown core.

Furthermore, the establishment of LRT would encourage people to actually use public transport and reduce the amount of vehicles in the downtown core. This would result in traffic congestion being significantly reduced. The intersection of James and King is very noisy and would drastically benefit by having less congestion, especially at peak traffic hours. As congestion decreases, this results in environmental benefits by having less pollution and less noise around the LRT system. The LRT system runs solely on electricity, producing no emissions and therefore no sound.

However, with any massive construction project there also come disadvantages. After examining the proposed route, a clear disadvantage arises when analyzing the landscape of James Street North. The area is extremely dense in not only population, but with large commercial buildings and small businesses surrounding it. This means that heavy construction for the LRT would need to take place and creates a significant challenge for the City of Hamilton. In the short term, this would create significant traffic congestion but the final product would be well worth the short term congestion. The other disadvantage is that there is a possibility of trees and bushes getting in the way of construction because there is quite an abundance running around James Street, which poses another challenge. Overall, this particular route has advantages that far outweigh the disadvantages, by providing citizens with an improved quality of life, environmental benefits and connecting key destinations together.

The second proposed stop for the LRT system is to be located at the intersection of King Street East and James Street North. This stop is very critical for numerous reasons. Firstly, this intersection is the heart and center of Hamilton’s downtown core. In addition, James Street is distinctively known as being historical and introducing unique buildings such as the Lister Block building in 1961 which was the first indoor commercial mall in Canada. This intersection is also home to the Bank of Nova Scotia and the Canadian Imperial Bank of Commerce (CIBC). This is an attractive location for a stop because of all the businesses in the vicinity such as banks, restaurants and KPMG LLP Hamilton. Additionally, there are numerous consumer outlets such as Jackson Square directly at the intersection, with many fast food and restaurants in the surrounding area. Jackson Square is an indoor shopping mall and commercial complex that also houses a movie theatre. The major advantage of this stop is that there are four bus shelters all within 50 metres of the intersection. This is important as this is obviously a very key stop for citizens and they could all greatly benefit by using the more efficient LRT system as opposed to busses. Along with this, people that use the bus service on a daily basis will be able to see how much faster and efficient this system is compared to taking a bus, while also reducing their carbon footprint. Since this intersection is at the heart of downtown Hamilton, it will serve as a positive reflection on Hamilton’s dedication to a clean and environmentally sound future. Finally, it will reduce traffic congestion by eliminating a majority of the downtown bus routes. The major disadvantage is the fact that since there are many large buildings and many businesses, building the LRT system through this location would pose a significant challenge. This is due to the high traffic density and pedestrian traffic that may pose a threat to the speed of the construction process. Although this is only a short term disadvantage of building in this location, the benefits will be very noticeable in such as traffic congested area.

ALL THE REFERENCES HAVE TO BE IN ALPHABETICAL ORDER