Food products are formulated for taste, appearance, cost and convenience of the consumer. The composition of food products that confer a health benefit is a relatively new trend, and recognizes the growing acceptance of the role of diet in disease prevention, treatment and well-being. It is thus becoming increasingly clear that there is a strong relationship between the food we consume and our health. Scientific knowledge of the beneficial role of various food ingredients (nutrients) for the prevention of specific diseases is rapidly advancing. Functional foods, pharma foods and nutraceuticals are synonyms for foods that can prevent and treat diseases.

Generally, a functional food can be defined as ‘any food that has a positive impact on an individual’s health, physical performance or state of mind in addition to its nutritional content’. Functional foods in addition to their basic nutritional content and natural being, will contain the proper balance of ingredients which will help to improve many aspects of human lives, including the prevention and treatment of illness and disease (Goldberg, 1994). So far, a large number of functional foods in various forms have already been introduced into the market. Many of them contain a number of characteristic functional ingredients. They include dietary fiber, oligosaccharides, sugar alcohols, peptides and proteins, prebiotics and probiotics, phytochemicals, antioxidants and polyunsaturated fatty acids (Stark and Madar, 1994).

Oligosaccharides are very well recognized as ‘functional food ingredients’ because of their positive effects on human health. This research work focuses on the microbial production and purification of Fructosyl Transferase (FTase) and the production of Fructooligosaccharides (FOS) by transfructosylation using this enzyme.

Oligosaccharides are functional food ingredients that have great potential to improve the quality of many foods. In addition to providing useful modifications to food flavor and physicochemical characteristics, they possess properties that are beneficial to the health of the consumers. In general, food grade oligosaccharides are not pure products, but are mixtures containing oligosaccharides of different degrees of polymerization, the parent polysaccharide or disaccharide and the monomer sugars (Roberfroid and Slavin, 2000).

The production and application of food grade oligosaccharides are increasing and their major uses are in beverages, infant milk powders, confectioneries, bakery products, yoghurts and dairy desserts.

FOS are chain polymers of the sugar fructose that are found in a variety of foods. The sugar units can be linked in a single straight chain or can be branched. In many cases small amounts of glucose are also contained in the chain. Chemically, FOS is difficult to define, because the length of the fructose chains can vary from source to source. Therefore a FOS analysis of a food may report the total of several closely related compounds. Inulin is an example of a longer chained compound that is considered as FOS. The shorter (lower molecular weight) compounds tend to have a sweet taste.

The size and complexity of the FOS molecule desirable characteristics. Although the simple sugars fructose and glucose are quickly absorbed into the body by the intestines, FOS for the most part is indigestible and therefore acts as a non-digestible fiber in the diet. This is because humans does not have the enzymes to break down FOS as it travels down the digestive tract. When the FOS reaches the large intestine and the colon, the bacteria that are found there start to break down the FOS. These bacteria have the enzymes needed to break down FOS. Bifidobacteria have been reported to use FOS. It is believed that foods that promote bifidobacterial growth are good for the health.

Of all the oligosaccharides known so far, FOS has attracted special attention. FOS is a common name for fructose oligomers that are mainly composed of 1- Kestose (GF2), 1 – Nystose (GF3) and 1F – Fructofuranosyl nystose (GF4) in which fructosyl units (F) are bound at the β – 2, 1 position of sucrose (GF). 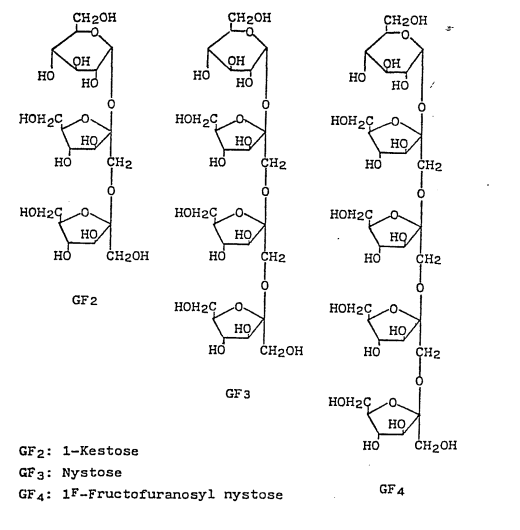 FOS derived from sucrose occur in many higher plants as reserve carbohydrates. They are found in a variety of edible plants, including banana, barley, garlic, honey, onion, rye, brown sugar, tomato, asparagus root, Jerusalem artichoke, wheat and triticale (Fishbein et al, 1988). The concentration of FOS in these foods is diagrammatically represented in Figure 1.2 (derived using data from the Environmental Protection Agency’s Dietary Risk Evaluation system – EPA, 1984). FOS like 1- kestose, neokestose, 6- kestose and their derivatives have also been isolated from the plant Agave vera cruz (Satyanarayana, 1976). 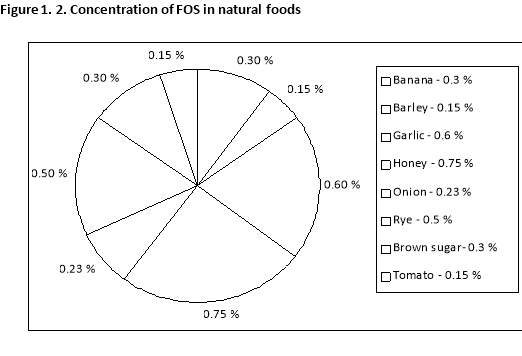 FTase by transfructosylation activity helps in the production of FOS. The enzyme source of FOS synthesis can be divided into two classes; one is plants such as asparagus, sugar beet, onion, Jerusalem artichoke etc; the other consists of bacteria and fungi such as Arthrobacter sp., Fusarium sp., Aspergillus sp., Aureobasidium sp.

The β- configuration of the anomeric carbon, C2 in their fructose monomers make FOS nondigestible by human digestive enzymes which are mostly specific for α-osidic linkages and hence they are not utilized as an energy source in the body. However, due to colonic fermentation, they have an energy contribution to food of about 1.5 kcal/ g. This property makes them suitable for use in sweet, low-calorie diet foods and safe for consumption by individuals with diabetes. In the case of very sweet foods, they may be used as bulking agents in conjunction with intense artificial sweeteners such as aspartame, phenylalanine or sucralose, thereby masking the aftertaste produced by some of these intense sweeteners (Crittenden and Playne, 1996).

Unlike starch and simple sugars, FOSs are not utilized by oral microflora like Streptococcus mutans to form acids and insoluble β-glucans, that serve as a matrix for plaque formation and are the main culprits in causing dental caries (Oku, 1994). Hence, FOSs are presently used as non – cariogenic sugar substitutes in confectionery, chewing gums, yoghurts and drinks.

‘Dietary fibre is the edible part of plants or analogous carbohydrates that are resistant to digestion and absorption in the human small intestine with complete or partial fermentation in the large intestine’ (AACC Report, 2001). The nondigestible quality of FOS makes them act similar to dietary fibre, and thus prevent constipation. However, excessive consumption of FOS may cause flatulence or diarrhea, the minimum dose being 40-50 g/day. The advantages FOS has over dietary fibre are that they have a smaller daily requirement, do not cause diarrhea in recommended doses, are slightly sweet, have neither bad texture nor bad taste, are completely water soluble, do not build viscosity, do not bind minerals, are physically stable, and are easier to incorporate into processed foods and drinks (Tomomatsu H, 1994).

In recent years, the ability of FOS to promote the proliferation of bifidobacteria in the colon has been recognized. These intestinal bacteria metabolize FOS readily and produce large amounts of short – chain fatty acids resulting in an acidic pH in the lumen of the large intestine. The beneficial bacteria such as Bifidobacterium sp. and Lactobacillus sp. are resistant to the acidic pH, whereas the harmful bacteria such as Clostridium sp. are sensitive to the acidic conditions. Therefore the proliferation of useful bacteria is stimulated and that of harmful bacteria is suppressed. Subsequently, FOS has been described as one of several prebiotics, which can be defined as ‘a nondigestible food ingredient that beneficially affects the host by selectively stimulating the growth and / or the activity of one or a limited number of bacteria in the colon and thus improves host health’ (Gibson and Roberfroid, 1995). FOS have been demonstrated to increase bifidobacteria numbers in the colon at doses of <15 g/day (Crittenden and Playne, 1996).

FOS have been found to enhance the absorption of Ca2+ and Mg2+ ions and maintain balance of iron and Zn2+ ions. This has been found to be due to the osmotic effect, acidification of the colonic content due to fermentation and production of short chain carboxylic acids, formation of calcium and magnesium salts of these acids and hypertrophy of the colon wall (Roberfroid and Slavin, 2000).

FOS has an indirect effect on prevention of cancer in human beings due to its prebiotic properties. This is due to immunity enhancements by the cells, cell wall components and extracellular components of bifidobacteria (Tomomatsu H, 1994).

The presence of a good colonic environment with high bifidobacterial count leads to the production of Vitamins B-1, B-2, B-6, B-12, nicotinic acid and folic acid. Bifidobacteria – fermented dairy products also improve lactose tolerance, calcium absorbability and digestibility (Tomomatsu H, 1994).

FOS have been claimed to have no effect on blood glucose levels in patients with type 2 diabetes, possibly due to effects of short chain fatty acids produced during fermentation. (Luo et al, 2000).

Normally, pure sucrose is expensive and the cost to produce FTase by using sucrose is high. There are some by-product like cereal bran, corn-products, sugarcane molasses and by-products of coffee and tea processing industries were used as a substrate to produce FTase from microorganism (Sangeetha et al., 2003). This by-product can lower the cost of production of FTase. Before FOS can be produced, the enzyme FTase must be undergone a series of purification. The purification of FTase must be done in order to get high yield of FOS. Many researchers have reported the purification and characterization of FTase from various sources and FTase has been found to differ in their molecular weight and properties from one source to another (Lateef et al., 2006, Sangeetha et al., 2003).

Find Out How UKEssays.com Can Help You!

FTase exhibits hydrolytic activity which can dominate the process (Delphine et al., 2007). This fact will lead to lower production yields and to a contamination of the final product with glucose and fructose (Delphine et al., 2007). Purification of FTase is important for batch production of FOS. By doing so, the nature of its hydrolytic activity can be studied, improve the understanding its mode of operation and be able to classified which type of enzyme should it belong to (Lâ€ŸHocine et al., 2000).

The main objective of this research is to purify FTase enzyme from microfungi Aspergillus oryzae isolated from CFTRI. To enhance the production of FOS as a food additive.

In Malaysia, the FTase enzyme used to be imported from other country such as Japan, India and United States (Sangeetha et al., 2005). Normally, the cost for production of FOS from commercialized enzyme is high, so by producing and purifying the enzyme, we can reduce the cost.

Normally, crude enzyme will produce lower yield of FOS than purified enzyme. In order to fulfill high customer demand on the functional food such as FOS, the production of FOS must be increased. In order to produce high yield of FOS, the enzyme need to be purified. By doing this, the activity of enzyme will be increased and so do the production of FOS.

Purification and characterization of the enzyme (FTase) are necessary steps to obtain the product (FOS) rapidly, with high purity, to improve our understanding of its mode of action and the nature of activity. Efforts have been made to purify the FTase enzyme to get high specific activity and fold of purification but the reaction mechanism involved in FOS production does not lead to higher yields than the theoretical maxima of 56 – 58 % due to inhibition caused by accumulation of glucose. Nevertheless, the time involved in obtaining maximum FOS yield has been considerably reduced by using the purified FTase in comparison to the crude FTase. The product FOS formed has also been characterized for its physicochemical properties and structure using HPLC or LC-MS. Studies on the prebiotic effects of FOS are required to establish its functional properties and to demonstrate its use in product development. The present research work has also focused on the scaling up of both the production of FTase as well as FOS.