Oxidative stress increases amyIoid-~production, and, conversely, amybid-/ I increases oxidative damage. To address the relationship between amyloid-/I and oxidative stress in vivo, we examined, using an array of oxidative markers, transgenic mice that overexpress amyloid-/3 precursor protein and, as in Alzheimer’s disease, develop characteristic amyloid-/3 deposits within the brain parenchyma. Transgenic animals show the same type of oxidative damage that is found in Alzheimer’s disease, and it is important that this damage directly correlates with the presence of amyloid-/I deposits.( Smith et al,1998)

Oxidative damage to the CNS predominantly manifests as lipid peroxidation (LPO) because of the high content of polyunsaturated fatty acids that are particularly susceptible to oxidation. Isoprostanes (iPs) are specific and sensitive markers of in vivo LPO (Pratico et al,1999)

FIGURE 4:Superoxide anion (O2) is formed in oxidative phosphory­lation in the mitochondria from molecular oxygen and is converted to H2O2 by superoxide dismutase (SOD). The detoxification of H2O2 is done by glutathione peroxidase (GPx) in the presence of reduced glutathione (GSH), leading to the formation of oxidized glutathione (GSSG). Glutathione reductase (GR) restores GSSG to GSH using NADPH.( Marcourakis et al,2008)

The increase in O2•- production would lead to an accumulation of intracellular calcium23 and activation of calcium dependent enzymes, such as nitric oxide synthase, which is responsible for the formation of NO. As a con­sequence of calcium accumulation, activation of protein kinase C may occur, one of the elements responsible for tau phosphorylation with the formation of the neurofibrillary tangles seen in AD.( Harm2.4)Antioxidants

Quercetin, a flavonol present in fruit and vegetables is a food constituent with proven valuable impact on health [Kaur & Kapoor, 2001].

A molecule of quercetin contains five hy­droxyl groups whose occurrence determines the compound’s biological action and the possible number of derivatives. The main groups of quercetin derivatives are glycosides and ethers as well as the less frequently occurring sulfate and prenyl substituents [Williams & Grayer, 2004].

Quercetin is one of the chief nutritional flavonoids belonging to a group of flavonols. It occurs mostly as glycosides, but also other derivatives of quercetin have been identified as well. Attached substituents change the biochemical activity and bioavailability of molecules when compared to the aglycone.(Materska et al,2008)

The beneficial effect of quercetin comes from its ability to scavenge highly reactive species such as hydroxyl and peroxynitrite.(agnes et al,2008)

2.6.1) Absorption, metabolism and bio-availability of quercetin

Because of the hydrophilic character of its glycosides, only quercetin without a sugar group, i.e. the aglycon, was initially suggested to be taken up in the gastro-intestinal tract by passive diffusion (Kuhnau, 1976; Grifï¬ths, 1982). However, a study with human ileostomy volunteers showed not only that quercetin glyco- sides can indeed be absorbed in the small intestine, but also that this absorption surpasses that of the aglycon by far, i.e. 52% of the glycosides was absorbed versus 24% of the aglycon (Hollman et al.,1995). 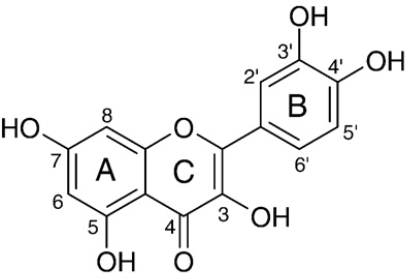 Other studies have confirmed that the absorption of quercetin is considerably enhanced by its conjugation with a sugar group (Hollman et al., 1997; Erlund et al., 2000). A possible explanation for this increased absorption, resulting in a higher plasma peak concentration and an increased bio-availability, is the facilitation of glycoside absorption by either deglycosylation (Day et al., 1998; Nemeth et al., 2003) or carrier-mediated transport (Gee et al., 2000; Walgren et al., 2000a,b).

Normally, human quercetin plasma concentrations are in the low nanomolar range, but upon quercetin supplementation they may increase to the high nanomolar or low micromolar range (Hollman et al., 1996; Conquer et al., 1998). Recently, a study regarding the tissue distribution in rats and pigs has shown that, upon quercetin supplementation, the highest accumulation of the flavonoid and its metabolites is found in (rat) lungs and (pig) liver and kidney.

Unfortunately, pig lungs were not analysed (de Boer et al., 2005). It has been shown that the half lives of the quercetin metabolites are rather high, i.e. 11 to 28 h. This indicates that, upon repeated quercetin supplementation, they could attain a considerable plasma level (Hollman et al., 1997; Manach et al., 2005).

As compared to other flavonoids quercetin is ost potent scavenger of reactive oxygen species (cushnie and lamb,2005).the property of antioxidative capacity is due to presence of two molecules firstly a catehol group in B rING and OH group present in the ac ring at postion 3.(Heijnen et al 2002)

In this study QUER and QU-CAP,derivative of quercetin is a potent protesome activation and also antioxidant properties which effect the cellular liespan viability and survival(

The study shows that hydrolysis of glycosides accelerates their absorption in the small intestine .it is site where metabolic conversion takes place because of enzymatic activity of sulfation and glucuronation.(murota et al,

The finding suggested that the administration of quercetin at early stages with optimal dose may improve brain damage and also offer neuroprotection in the SAH model by increasing the activity of endogenous antioxidants enzymes and generation of free radical is inihibited.(dong et al,2014)

It has been seen in PC12 cell lines th quercetin considerably contribute to protective effect from oxidative stress induced neurotoxicity such as alzehimer disease.(Heo et al 2004)

It was suggested that quercetin can inhibit the overproduction of NO and over expression of iNOS in PC12 cells which explains the role of inflammatory genes in neuroprotective effect of quercetin.(zhang et al 2011)

The findings of this study shows that quercetin protected mitochondria from toxicity induced by MeHg which induces the formation of reactive oxygen species.(wagner et al ,2010)

It was seen that treatment with quercetin increased the striatal dopamine and levels of antioxidant enzymes in rat striatum.(Haleagrhaea et al,2011)

Quercetin considerably increased the level of SOD activity and decreasing the MDA level which shows quercetin ability to reverse the changes induced BY d-gal in mouse brain.(2006)