Cigarette smoking is one of the major cause for many of the lung diseases. Smoking is a practice of burning a dried plant and inhaling the smoke. It is one of most common form of recreational drug usage.

People who smoke, get addicted to smoking which leads to gradual damage to the body. The substances that are inhaled causes reactions at the nerve endings in the central nervous system. These reactions are similar to that caused by the naturally occurring hormones, dopamine and endorphins, which are the main contributors of the sensation of pleasure known as ‘being high’. The level of being high can vary from mild stimulus (generally caused by nicotine) to intense euphoria (caused by heroin, cocaine).

Pulmonary emphysema is the gradual damage of alveolar cells which progressively leads to short breath. It a type of COPD in which lung tissue is broken down with increasing an inflammatory response. Pulmonary fibrosis results due to the buildup of fibroblast in the small airways which eventually blocks the airway making it difficult to breath and causes eventual degradation of lung tissue due to less air supply.

Smoking also increases the risk of lung cancer in an individual. The compounds inhaled during the smoking process have the tendency to alter the DNA of a person which can cause DNA alterations which can be passed onto the next generation of the smoker.

The major part of the lungs that get affected by smoking is the alveoli. Alveoli are small balloon-like air sacs which act as the sites for gas exchange in the lungs. These sacs gets inflated and deflated during inhalation and exhalation. 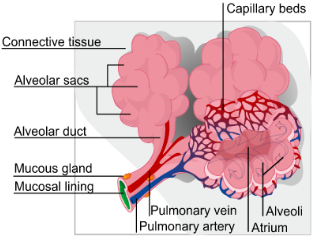 Fig1 : Diagram of an alveoli 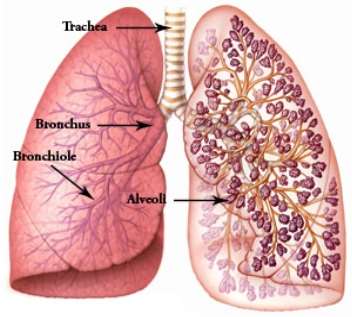 Alveoli are surrounded by a mesh of capillaries which bring carbon dioxide from rest of the body to exhale and absorb the oxygen that is inhaled. They are formed of epithelial cells and extracellular matrix. Some of them consist of Pores of Kohn which help in alveoli spacing. They are also composed of collagen and elastic fibers which help the alveoli cells to stretch in order to get filled up with air during inhalation and relax back to its original state during exhalation.

Generally there are three type of alveolar cells : type I, type II and macrophages. Type I cells are generally composed of squamous cells and form the wall of the alveoli. Type II cells , also known as great alveolar cells, produce pulmonary surfactant that reduces the surface tension of the membrane and increases the capacity of gaseous exchange. Macrophages helps in attacking the foreign harmful materials.

Type II cells plays a major role in the repair of lung tissue. They are known as the progenitors of Type I cells as they repair the endothelium of the alveoli when it gets damaged by moving to the denuded area (2,5,6) and proliferating into new cell Type II cells which can differentiate into Type I cells, thereby restoring the damage.

Cigarette smoking has severe effects on these alveolar cells in the lungs which can lead to diseases like pulmonary emphysema, pulmonary fibrosis and lung cancer. Due to cigarette smoking alterations are caused to the alveolar epithelial cells (Type I and Type II), which can increase the epithelial permeability, decrease the surfactant production of Type II cells, produce the cytokines and growth factors which causes inflammatory responses in the lungs. Also there is an increase in the cell death by either apoptosis or necrosis depending on the quantity of smoke components inhaled, which is because just active smoking is not harmful but passive smoking can also damage a person’s lung.

Cigarette smoking has a number of adverse effects on the lungs. One of these effects in the generation of excessive oxidative stress. As mentioned earlier, cigarette smoke contains nearly 4000 different chemicals which are mainly carcinogenic (3). Among these major constituents are ROS (reactive oxygen species) and RNS( reactive nitrogen species) (2,3). A single puff of cigarette smoke contains 1017 oxidant molecules out of which 1014 are ROS such as nitrogen oxide and superoxide radical which when in the lungs, reacts immediately to form reactive peroxynitrite. Also the smoke contains hydroquinones which after redox cycle forms superoxide radical and hydrogen peroxide. This hydrogen peroxide and hydroquinones can enter the cell’s nucleus and can cause oxidative DNA damage. Another factor contributing to the oxidative stress is the production of iron from ferritin which can trigger the phagocytes to release ROS (2). It also reduces the levels of anti-oxidants in the blood.

The damages caused eventually leads to cell death by either apoptosis or necrosis, which depends on the magnitude of smoke inhaled. A recent study showed that at low levels of aqueous cigarette extracts, cells undergo apoptosis and at high levels they die by necrosis. These cell deaths are caused due to the effect of ROS on them. The in vitro test of cell apoptosis was supported by in vivo study on rats which were exposed to cigarette smoke for approximately 100 days and showed bronchial epithelial cell death. 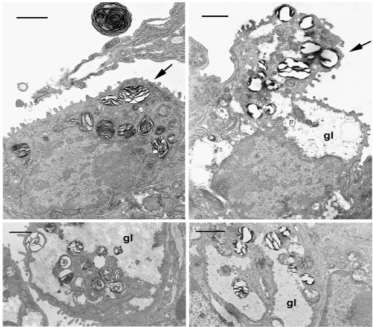 The alveolar wall have holes that could provide channels between adjacent alveoli which are known as Pores of Kohn. These are traditionally known as pathways for collateral ventilation, but due to the small size, they are occluded with surfactant which probably precludes them from functioning in this capacity. These Pores of Kohn represent injuries that might have been repaired. They equalize pressure in adjacent alveoli cells and thereby helps to prevent the collapse of lung (7,9). 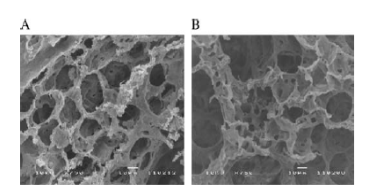 Also it has been observed that due to emphysema induced by cigarette smoking these pores enlarge in response to the disease thereby reducing the effect of the disease. The number and size of Pores of Kohn are dependent on the age of the person (shown in figure 4). With an increase in number and size of pores, alveolar size also increases with age which is termed “senile emphysema.” 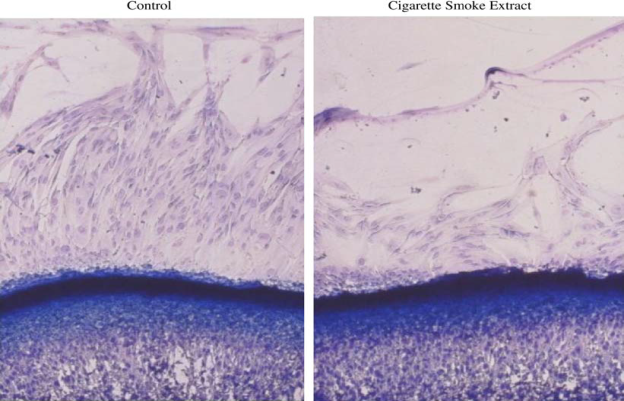 In-vitro models of mesenchymal cells are developed by culturing fibroblast/myofibroblast in three-dimensional collagen gels which shows their ability to contract (8,11). This ability of fibroblast is inhibited by the components of cigarette smoke causing them to lose their ability to heal wounds by contracting the affected area.

Emphysema is also exacerbated by starvation, shortage of oxygen supply, which is followed by intratracheal elastase infusion (12). Studies were conducted on mouse that indicate that T-cell–derived factors drive lung cell apoptosis which play a major role in starvation-induced emphysema (10). It has been made evident that smoke promotes starvation and inhibits the refeeding ability (counter action of the cells to starvation) and thereby worsen emphysema.

COPD not only causes emphysema but also develop peribronchiolar fibrosis. It is developed in small bronchiolar airways and is characterized by the deposition of fibroblast and myofibroblast together with extracellular matrix to produce fibrillar collagen. This collagen contracts and narrows the small airways. 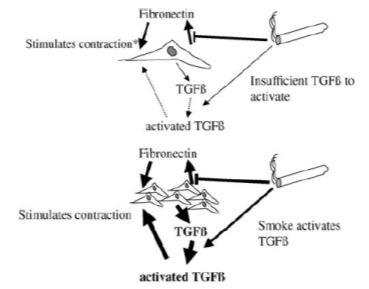 Fig 6: Cigarette smoke modulation of repair by paracrine mechanisms: effect of cell density. (Upper panel) At low cell density, cigarette smoke inhibits fibronectin production and because fibronectin stimulates contraction, smoke inhibits contraction as well. Any effect of smoke in activating transforming growth factor (TGF)-β is inconsequential as the concentrations of TGF-β are too low to elicit a response. *Loss of stimulation causes inhibition in the presence of smoke. (Lower panel) At higher cell density, sufficient TGF-β is produced by the many cells in the local milieu to elicit a response. Smoke-induced activation of TGF-β results in augmented contraction, even in the face of direct inhibition of fibronectin production.(1)

As described earlier smoking can also affect DNA, as a result acquired genetic abnormalities are also developed. Cancer caused by cigarette smoking is also believed to be developed by somatic cell mutations. These mutations can also cause COPD. Cigarette smoke has the ability to damage DNA by several mechanisms (15) which can inhibit apoptosis (13, 17) which protects from unwanted, genome altered cell growth. As a result DNA repair gets initiated which leads to cell recovery and subsequent proliferation. This could lead to the accumulation of cells that have altered gene function and causes impaired repair responses within the lung of smokers .

Different strategies are developed to restore repair mechanism in the lung tissue. Studies on adult rats demonstrate that all-trans-retinoic acid can induce new alveolar wall formation (18,19). But limited studies on human volunteers has demonstrated safety but no alveolar repair. It can be concluded that different direct and indirect repair mechanisms are altered by cigarette smoking. The progression of diseases caused by lung tissue damage can be slowed by understanding and creating novel techniques which can target the repair responses in the lung.