The house mouse (Mus musculus) is a small mammal of the order Rodentia, characteristically having a pointed snout, small rounded ears, and a long naked or almost hairless tail. House mouse can live together with humans. The house mouse has been domesticated as the pet and the laboratory mouse, which is one of the most important model organisms in biology and medicine.

House mice have an adult body length (nose to base of tail) of 7.5–10 cm and a tail length of 5–10 cm. The weight is typically 10–25 g. In the wild they vary in colour from light to dark agouti (light to dark brown) but domesticated mice and laboratory mice are produced in many colours ranging from white to champagne to black. They have short hair, ears and tail have little hair. The hind feet are short, only 15–19 mm long; the walking way is a run with a stride of about 4.5 cm, though they can jump vertically up to 45 cm. The voice is a high-pitched squeak. House mice can live under various conditions: they are found in and around homes commercial structures, open fields and agricultural lands.

New-born males and females can be easily distinguished .From the age of about 10 days females have five pairs of mammary glands and nipples; males have no nipples. When sexually mature the most striking and obvious difference is the presence of testicles on the males. These are large compared to the rest of the body and can be retracted into the body. Tail has only a thin covering of hair as it is the main peripheral organ of heat loss and used for balancing.

House mice usually run, walk, or stand on all fours, but when eating, fighting, or orienting themselves, they rear up on their hind legs with additional support from the tail. This behaviour known as tripoding. Mice are good jumpers, climbers, and swimmers, and are generally considered to be thigmotactic, means maintain contact with vertical surfaces.

Mice are mostly nocturnal. The average sleep time is 12.5 hours per day. Mice are territorial, and one dominant male usually lives together with several females and young. Dominant males respect each other’s territory and normally enter another’s territory only if it is vacant. If two or more males are housed together in a cage, they will often become aggressive unless they have been raised together from birth.

House mice primarily feed on plant matter, but are omnivorous. They will eat their own faeces to acquire nutrients produced by bacteria in their intestines. House mice, like most other rodents, do not vomit. Mice predators are rats which often kill and eat mice, a behaviour known as muricide.

Humans and rodents share some similar characteristics and genetic similarities since both are mammals. This makes rodents, especially mice, very suitable lab animals to conduct experiments that cannot be done on human beings. There are many types of maze that have been created for different type of studies, from classic maze, T-maze, radial arm maze, Barnes maze and even water mazes. These maze studies are used to study spatial learning and memory in mice. Maze studies have given tremendous help to study the general principles about learning for a better understanding not just in mice, but also other species including humans. There are a lot of maze studies conducted by various researchers who are curious to know whether different treatments or conditions affect learning and memory in mice. Our experiment is mainly focused on spatial learning ability between male and female mice in finishing the mazes.

I. To test the memory power of mice from both sexes

II. To find out the intelligence mice from both sexes to find out way to get the food

III. To find out which mice (male or female) learn faster

Female mice will learn faster than the male mice.

USED IN THE EXPERIMENT:

Table 1 shows time taken for a male mouse to complete 3 mazes with 3 trials.

The mazes consist of vertical walls and a transparent ceiling. The rat starts in one location, runs through the maze, and finishes in another location where they were rewarded with biscuits as treat. In the first maze, we can see that the time taken for the male to complete the maze decreases as the male attempted three trials. During the first trial, it took 1 minutes and 59 seconds for the male to reach the end for the first time. After a 5 minutes interval, we proceed with the second trial and found that the male agility improved as he took a shorter period to complete the maze, that is 1 minutes 8 seconds. The last trial for the first maze only took 44 seconds to be solved by the male mouse. Less time is needed to finish the maze as the male mouse learned better, and perhaps remember better from solving the first and second maze.

In the second maze, different trend can be observed. The time taken for the male mouse to complete the maze fluctuated between the first and second trial by 1 minute 2 seconds as what we assumed them to be. However, the male mouse took a longer time to finish the third trial. Instead of taking a shorter period to solve the maze, he took 45 seconds more of his time to reach the end. This is due to the mouse behaviour, where during the experiment was carried out in the maze, eventually he will stop to clean himself for a few times, which extended the time taken to complete the maze.

When we first introduced the third maze to the male, he took the longest time to finish the maze by taking up to 12 minutes 41 seconds before he finally reached the end. When the experiment was conducted, we observed that the male mouse took a longer time to explore the maze rather than trying to complete the maze to earn his treat as he was already satiated. There’s also up to a point when the male would not move at a certain place, as if he was resting or getting bored with the maze. There’s a huge different between the first and second trial of the third maze where the male only took about 3 minutes to complete the maze, with a slight increase when he finished the third trial by an increase of only 8 seconds. 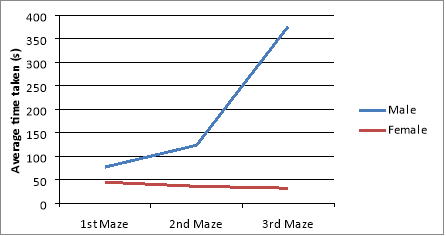 Comparatively, the female is a faster learner compared to the male mouse. From figure 1, we can analyse that in average, the female took a shorter time to solve all three mazes compared to the male. However, the extreme data obtained when the male completed the third maze could have affected the average time for the male mouse. Astonishingly, the more difficult the level of the maze, the shorter time was needed by the female mouse to complete the maze. The first maze is the easiest level, followed by the second and the third. This is different from the male, where the more difficult it gets, the longer time is taken to complete the maze, just like what we hypothesized for this experiment.

Since mice already satiated, they does not attracted or interested to the food. In some observation, the mice show behaviour where they only see the food from few centimetres from them. Besides, they didn’t go to get the food until a few second after they show this behaviour. Then, they just go close to the food but did not eat the food.

Most of the observation, mice suddenly sit down and start to clean up themselves. This behaviour repeatedly occurred in some observation; maybe they become tired and not interested in running in the maze.

Sometimes, mice urinate and defecate in the maze. This factor will affect the time taken of the mice to reach end of maze. It is either they become disturbed with the scent of their own excretion or use it as an advantage to trail the end of maze.

The first error that occurred in this experiment was when the mice did not want to approach the food and ended up resting in the maze. This may be because the mice were not hungry. The second error is that the mice tend to give up in finding food. This error might occur because the mice get tired or maybe because the pathway was long.

The third error was accuracy in recording the time. At some time, we recorded the starting time and ending time slightly shorter or longer from the exact time since we got distracted in watching the mice in the maze. The next error was wrong selection of food. At first, we placed grain at the end of maze and we found out that the mice didn’t seem to be attracted to it. Then, we decided to put biscuits instead of the grains. The mice turned out to get attracted to the biscuits.

Other error that occurred was the materials that we used to make the maze. The mazes were made by using the boxes, which absorbs the urine of the mice and release bad odor. This odor caused the mice to get distracted.

The last error that we encountered in this experiment is that the environment during the experiment and the way in handling the mice. This experiment was conducted in a bright room. This may be the reason the mice do not wanted to come out from the box where they were placed since mice are sensitive to light. And also, the way we handled the mice could be one of the reason the mice stayed inside the box. Maybe the way we handled the mice were not that proper, causing them to think that we might harm them.