What is the Joint European Torus and how does it work?

The Joint European Torus, or JET, is a physics facility located in the Culham Centre for Fusion Energy in Oxfordshire. Plasma physicists and engineers there are producing thermonuclear plasmas under magnetic confinement in order to show that fusion energy is a reliable source of energy in the future. It is very difficult to do on earth as in order for nuclear fusion to happen temperatures millions of degrees above the core of the Sun must be achieved as it is impossible to gravitationally confine the plasma (CEA, 2001) – which is the way it happens in stars.

A plasma is defined as a quasi-neutral ionised gas, and because it is charged, it can be manipulated by electric and magnetic fields (Suplee, 2009).

The History of the Joint European Torus

JET’s history started in 1970 when the Council of the European Community decided to embark on a fusion research programme and build a European fusion device. After three years in 1973, the designs of JET were being drawn up and in 1977 the Culham site was chosen to build JET and construction work began. It then started operation in 1983 (United Kingdom Atomic Energy Authority, 2012). The 9th of November 1991 is a particularly important date in the history of nuclear fusion as this was when the Preliminary Tritium Experiment “achieved the world’s first controlled release of fusion power” (ITER Organization, 2014).

What is nuclear fusion?

Nuclear fusion is what powers the sun and it involves two nuclei fusing together under extreme temperatures and pressures. When this reaction occurs, energy is released from Einstein’s energy-mass equivalence equation 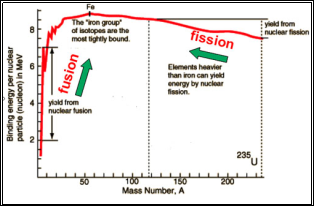 With regards to nuclear fusion, a lot of energy is released, especially when compared with nuclear fission. We can compare the energy outputs of both nuclear processes through the concept of binding energy. Binding energy is the amount of energy needed to either remove each nucleon from each other within the nucleus or the energy needed to fuse the same number of nucleons to form the nucleus of an atom. Looking at the binding energy per nucleon for the elements, we can see which are the most stable elements (they have the highest binding energy per nucleon) and see which processes (fission or fusion) releases the most energy.

It should be noted that the mechanism for nuclear fusion in stars is different compared to achieving nuclear fusion on earth. In stars, the hydrogen atoms are fused together due to the extreme pressures as there is such a large quantity of stellar material. An example of one of the main nuclear cycles that take place in stars is the Proton-Proton Chain which happens in stars with the same mass as our Sun or less (The University of Tennessee). The main reaction is the first step where it converts hydrogen and deuterium into helium and emits a gamma ray as follows:

These pressures, as well as the high temperatures, and the effects of gravitational confinement means that the hydrogen atoms, which would normally repel one another due to their positive charges at the centres of their nuclei, are able to overcome the Coulomb barrier, and therefore the strong force is able to attract these nuclei together releasing vast amounts of energy and producing helium in the first place. The Coulomb barrier is the energy that is needed for the electrical repulsion to be overcome in order for the strong nuclear force to take place in order for the nuclei to fuse together (HyperPhysics).

Here on earth, it is impossible to gravitationally confine large amounts of plasma, therefore physicists have developed two main methods for achieving nuclear fusion (for the purposes of civilian energy): inertial confinement and magnetic confinement (CEA, 2001). Another facility, the National Ignition Facility in Livermore, California uses inertial confinement and this involves the use of lasers.

However, JET is concerned with magnetic confinement and, as the name suggests, it involves magnets with a reactor shaped as a torus or as a hollow doughnut. The Russian physicist Andrei Sakharov first came up with the idea of a tokamak as it was considered the most optimal shape to successfully confine a plasma using magnetic fields.

In terms of magnetic confinement, for nuclear fusion to occur (this is called ignition); three main properties of the plasma must fulfil certain conditions. This is named the Lawson criterion after it was first proposed by John D. Lawson in 1955. The Lawson criterion states that the “triple product” of plasma density, confinement time, and the plasma temperature must fulfil this equation for a deuterium-tritium reaction:

is the plasma density,

is the plasma temperature and

is the confinement time.

Although a lot of energy is needed to overcome the Coulomb barrier and initiate the fusion process, the large energy yield is the reason why research at JET and at other institutes is still ongoing (HyperPhysics). The most common fusion reaction to be studied nowadays and the one that physicists at JET are looking into particularly is the deuterium-tritium, or D-T, reaction. Deuterium and tritium are isotopes of hydrogen. It is as follows:

Within the tokamak, the plasma current is induced by a transformer. The central iron transformer core acts as the primary winding, and this is situated in the hole of the tokamak reactor, and the plasma acts as the secondary winding. The plasma can act as a secondary winding because it is electrically-charged and therefore acts as a conductor. The alternating current that is supplied to the central magnetic coil induces a changing magnetic field and this is used to control the plasma. This produces a heating effect called Ohmic heating. Thus induced current causes heating which also happens in conventional transformers as well. 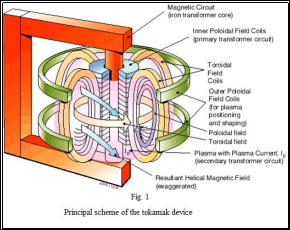 Neutral-beam injection involves the introducing high-energy atoms into the magnetically-confined plasma when it is already ohmically heated. These atoms are ionised as they pass through the plasma and therefore are also controlled by the magnetic field present. They then become high-energy ions and as a result, they transfer some of their energy to the plasma particles in repeated collisions. This increase in the number of collisions increases the average translational kinetic energy associated with these ions and thus increases the temperature of the plasma overall.

Furthermore, radio frequency heating is also used to heat the plasma. This is generated through induction high-frequency oscillating currents in the plasma by external coils. There are parts of the plasma where the energy absorption is high and the frequencies are chosen to match the frequencies of these regions. This is called resonance and it allows large amounts of power to be transferred to the plasma.

The main purpose of the tokamak in JET is to magnetically confine the plasma with the help of the device called a “tokamak” which is a Russian acronym for a torus-shaped magnetic chamber (European Joint Undertaking for ITER and the Development of Fusion Energy (‘Fusion for Energy’), 2013). In order to successfully confine the plasma, the magnetic field lines must move around the torus in a helical shape generated by toroidal and poloidal fields. 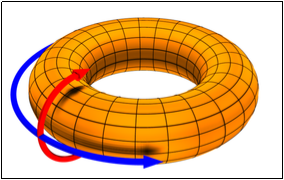 At the moment, JET can only produce around 70% of the power needed to heat the plasma in the first place (MlynáÅ™, 2007). However, a new tokamak called ITER is being built in Cadarache and developed in order to develop the technologies and obtain the knowledge necessary to built fusion power stations capable of producing more energy out than in (European Joint Undertaking for ITER and the Development of Fusion Energy (‘Fusion for Energy’), 2013). Energy production from fusion is a promising idea as a fusion reaction, in comparison to the combustion of fossil fuels, is four times more energetic, thus more energy can be produced from very small quantities of deuterium and tritium (ITER Organization, 2014).

In practical terms, in order to produce 1000MW of electricity, 2.4 million tonnes of coal would be needed each year for a coal-fired power station, however only 125kg each of deuterium and tritium per year would be needed to produce the same amount of energy (ITER Organization, 2014).

From the research conducted at JET, it was apparent to physicists that a bigger tokamak must be built in order to break-even and hopefully obtain a greater energy output than input. To reiterate, this tokamak is known as ITER and is currently built in the south of France. Even then, ITER is not being built specifically for energy production and it is only until DEMO will be built that it can be demonstrated to the world that it is possible to harness the power of nuclear fusion on energy. DEMO is expected to be running sometime during the 2030s and an actual fusion power plant to be running by 2050 (EFDA, 2014). However, due to inevitable geopolitical issues and financial constraints, there is every possibility that these dates may be pushed forward into the future. Even so it was in 1905 when Einstein first formulated the mass-energy equivalence relation, it was in 1920 when Eddington first discovered how stars produced energy, it was in 1927 when Langmuir gave “plasma” its name and thus plasma physics was born (MlynáÅ™, 2007); and there have been many other milestones within plasma physics since then that even if the dates fusion civilian energy is pushed forward by a couple of decades or more it will not mean anything in the long term as man will finally be able to “learn how to release it and use it for his service” – as Eddington said. Irrespective of when the production of fusion energy will occur, JET will have been a cornerstone in the history of fusion energy and plasma physics as experiments at JET have made us closer and closer to ignition. The next step is to build the next series of tokamaks and finally the fusion power plant.

European Joint Undertaking for ITER and the Development of Fusion Energy (‘Fusion for Energy’). (2013). What is Fusion? Retrieved January 16, 2014, from http://fusionforenergy.europa.eu/understandingfusion/

The University of Tennessee. (n.d.). The Proton-Proton Chain. Retrieved January 18, 2014, from http://csep10.phys.utk.edu/astr162/lect/energy/ppchain.html