The English language as a colonial legacy; looking at Zimbabwean artist Moffat Takadiwa

As a youngster growing up in Zimbabwe I used to question why my Shona friends had common English words as first names such as “Patience, Mistake, Gift.” This grew to more than just a speculation and developed into a career looking into how colonial influence has deeply embedded itself in society in Zimbabwe. Giving children English words as names was seen as an empowering act but essentially, this only adds to the loss of our own narratives. English was enforced as a divine supremacy conditioned by the Colonialists as a way to govern, which dubbed any other language as inferior to the self proclaimed English speaking idols. The Zimbabwean artist Moffat Takadiwa looks at how English is used as a tool for lingering dominance. He gathers up old keyboards and meticulously pulls them apart to create new sculptural, ethereal installations that develop a new language of their own. The letters sit side-by-side, allowing free association to cultivate through the fabric of woven characters. The act of tearing something whole apart to construct a new entity speaks from the heart of what Takadiwa is trying to achieve with his work.

A daylight ghost that hangs in the air, tangible yet not seen, is the English language. Its use means that communication is a translation or an interpretation from the original, subsequently communication is left with a half cast shadow; never allowing the light to fully reveal the true meaning. Hence, the need to challenge persisting hierarchies of knowledge in Zimbabwe remains a pertinent objective of many Zimbabwean artists. By using predominantly English within our cities and in our institutions we are allowing the Eurocentric lens to become our focal point. Language is integral to decolonization. The use of English, along with the prevailing memorials set about the city of Harare, fosters institutionalized memory where colonial monuments laud over public spaces making people visitors in their surroundings. Monuments become weapons to culturally dominate as opposed to embody the culturally dominant. Your sense of temporality is created through understanding your past; when individual histories are silenced by overshadowing narratives, we need to remake, redo and rediscover our identity. Building up heritage and celebrating culture is a way to redefine a more inclusive and accessible national identity; this requires a shift from normative paradigms that advantage knowledge, curating and seeing by changing how we classify the knowledge hierarchies in Africa.

Positive transformation and unity is usually initiated by communities coming together to share stories, heritage and culture however if the method through which we communicate is English; part of our story is lost in translation from the offset. There is a void created where the intangible cannot be interpreted such as the freedom of body language, the sincerity of expression, the essence of gesture and indescribable nuances. Communicating in Zimbabwe’s mother tongues is essential to opening up a nexus of interactions that are able to celebrate differences, alternative narratives and retain diversity. As Thiong’o very rightly wrote “Monolingualism is the carbon monoxide of culture; multilingualism is its oxygen.” [1]

Visibility needs to be shown in translation. There has been a cloak of invisibility shrouded over the translator, which has allowed for interpreted material to be deemed as truth. Cultural interpretation is transient and ephemeral. Translation is not transparent; it has been manipulated throughout history especially in the case of colonialism as a vehicle for control. Ownership needs to be granted to the translator to attest that true cultural interpretation is never articulated. We need to embrace and celebrate our lack of understanding; allowing the grey areas to remain grey, consenting to translation no longer being definitive but porous and plural, hence inviting a multiplicity of resolutions. The same concepts can be extrapolated for monuments that are celebrated, as Nate Dimeo correctly remarked: “Memorials aren’t memories. They have motives. They are historical. They are not history itself”[2].

Takadiwa was spurred on by the call for decolonization by the #RhodesMustFall  movement that swept South Africa. This movement started by Chumani Maxwele throwing excrement on the statue of Rhodes that stood outside of The University of Cape Town, was aimed at the continued existence of colonial art and heritage objects, memorials, statues and oppressive representation at the University and consequently their call for removal [3]. The dialectic between this audacious call for transformation, and the regimented structure of the academic syllabuses, aimed to bring abrupt attention to the hierarchal knowledge structures and finally collapse the regime of white supremacy and privilege and its celebrated legacy [4]. Artists like Takadiwa have followed this development by calling for direct action and employing creative resistance schemes through their art practice. Decoloniality is a continuing epistemic project that aims to celebrate the Global South from individualized, diverse vantage points. The need to understand a plurality of cultural perspectives is a progressively imperative task. Takadwia speaks not only about the problematic use of the language of the oppressor but of how our education system in Zimbabwe is equally Eurocentric and in need of transformation.

It is not solely the role of the artist to initiate or be the spokesman for decolonization; the curator, institutions and museums play just as vital a role in deriving transformation. A similar lack of translation or miscommunication occurs in art institutions where the conditions through which we view artworks are controlled. Context is significant as it depicts how the artwork is seen, in what setting, in what style, with what other works sitting beside it and under what narrative the curator has placed it. It is therefore prevalent to become aware of the trap of prejudices and discard the preconceived notions of truth. This requires a renegotiating of art history from within the institutions themselves. Museums and institutions need to adapt their theoretical approach to solve their epistemological and ethical issues towards decolonization. However theory alone is not sufficient, integration and practical reworking of collections and frameworks needs to be addressed. The act of decolonizing cannot be surmised and complied for all to employ but needs to be confronted on an individual encounter with the intention of holding knowledge without power.

Materiality is fundamental to the production of Takadiwa’s practice. He uses foreign, found objects that are consumed by the Western world and shipped in from Asia. Takadiwa struggles to find traditional artistic materials to use and hence it seems appropriate that his artworks are a direct reference to this frustration. Takadiwa finds his materials in the rubbish dumps of Harare however he speaks of the dumps as libraries. Libraries filled with information about Zimbabwe, its consumption and its colonization. He and his team comb through the mountainous piles of rubbish to find toothpaste tubes, aerosol canisters, bottle tops and his signature material; keys from old keyboards. The phrase ‘one mans trash is another mans treasure’ is truly palpable in the work of Takadiwa.

Upon visiting Takadiwa’s studio in Mbare, Harare I recognized how significant it is that he remains producing work in Zimbabwe. Much of the art that has been created in Zimbabwe is made for European or American dealers and art fairs abroad, which simply postulate ideas of primitivism and exoticism on the production of art. To foster a sense of national identity, art as an experiential aspect, needs to be part of the Zimbabwean’s day-to-day life. Therefore artists, galleries and institutions should be encouraged to play their role in the structuring of a decolonized art and culture sector and development of increased public engagement within the country. Takadiwa explains:

“I believe that I am not making objects exactly, but statements which are meant to change the lives of my people, the image of my country, and the world at large. Through my work I collide the laws and policies of my country against the excretes of its society.”

The artwork Superhighway of Coloniality (a) delivers an austere message about the state of the economy in Zimbabwe and it’s pillaging from abroad. Standing in front of this piece you are transfixed by its enormity and the intricate detail of the woven computer keys. The replication of the weaving styles of traditional Shona baskets gives reference to the heritage of Zimbabwe and forces you to consider a tale of a plastic endowed, consumer driven, Eurocentric future now woven before you. This message is one that the people of Zimbabwe should consider and hence cements the importance of art and cultures existence in our society. 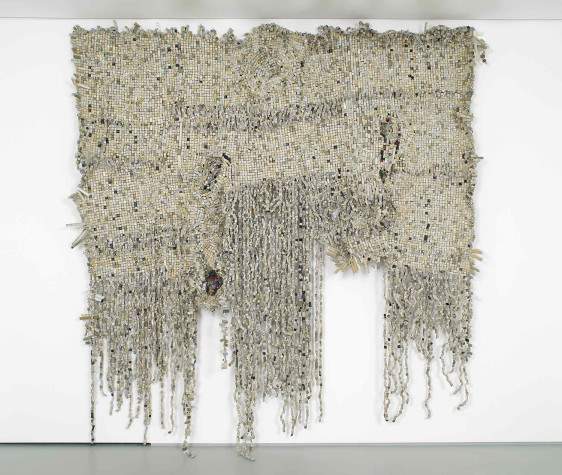 Superhighway of Coloniality (a)