Seoul is the city and the capital of South Korea. It is one of the most vibrant and modern cities in Asia. Seoul can be visit in any season but is best to visit in spring and autumn. There is good and inexpensive public transport for tourists to travel easily. Seoul is suitable for tourists like adult couples and friends groups to travel to Seoul because Dongdamun market and Insadong have the best shopping places. N Seoul Tower in Namsan has an incredible panorama night view, and Gangnam to experience the crazy night life and the shooting of the most popular music video “Gangnam Style”.

Destination is a critical role in tourist decisions, it can influence tourists to visit by its reputation and imagine from different range of media such as television, online, video, newspaper and more. The purpose of this report is to provide information about the tourist destination image of Seoul. This report will include a brief introduction of Seoul, four highlight destinations and two inferred target tourist bases on the destination. 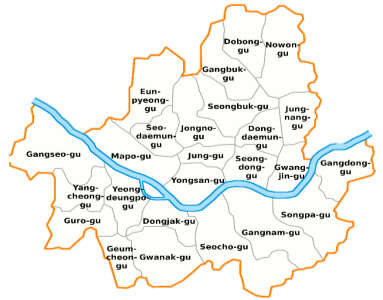 Seoul is the city and capital of South Korea, located in the northwest of Korean Han River. Seoul have a total of 25 districts, and a surface area of 605 km2. The city is surrounded by 8 mountains, with Namsan Mountain and N Seoul Tower in the middle, and is split by the Han River that passes through the city and flows to the coast of Yellow Sea. (Korean Orbit, n.d),

Seoul has between humid continental and a subtropical transitional climate with four distinct season. The temperature difference of the summer and winter are extreme. Summer (June to August) are normally hot and humid with the temperature between 22 to 29° C. In winter (December to February) the temperature can be as low as -6°C. However the spring and autumn is the best season for tourists to visit in Seoul as the rain is less and climate become warm. (World Travel, 2017)

Seoul is the world’s tenth largest city, and it is one of the major financial cities in Asia, and the centre of the political, economic, technological, and educational and culture of the South Korea. According to Seoul Metropolitan Government’s statistic (2014), the total population in Seoul has reached over ten million in 2017, about half of the South Korea population live in Seoul. In ten million, about 2.7 million are foreign residents mostly from China, Taiwan and United States.

Furthermore, Incheon or Ginpo international airport are the two major airports that close to Seoul. Thus, there are airport express train, all stop train, airport bus or taxi service available for tourists to travel from airport to Seoul. (Imagine your Korea, 2017b) In Seoul, there are many good local buses, subways trains and taxis make getting around the cities and towns much more easily and inexpensive. Most of the trains and buses arrive and leave on time. Most of the signs and information are both in English and Korean languages. Tourists must have a T-card to travel around Seoul by public transport and it can be purchased or topped-up in every subway station. Tourists can also rent a car from local car service in Seoul. (Trip Advisor, 2017)

A range of different sources of material were reviewed for this research report to create a destination profile of Seoul. Web sites include Visit Seoul and travel blogs and online newspaper articles from Daily Mail. Music videos set in Seoul were viewed on YouTube to consider. The Seoul version of Lonely Planet and DK travel books from library. All of the images use in this report was gather from online. All the resources used for this written report are listed in the references list. 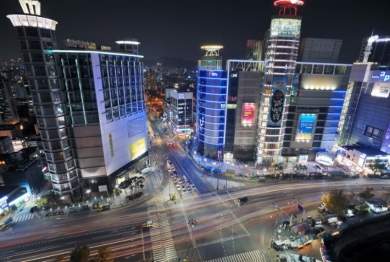 Dongdaemun generally mean “Great East Gate” is one of the major commercial district that include traditional markets and shopping centres that covers the all the area around the district. Dongdaemun Market is now become Korean’s largest retail and wholesale shopping district include 26 shopping malls, with 30,000 shops and 50,000 manufacturers

Tourist can find many varieties of goods in here, such as clothes, shoes, electronics, sporting goods and more with a reasonable price and good location. It is a shopping district for shopper and tourists at day time, it also a night market during night where street food stands and street stalls available along the street in Dongdaemun. The atmosphere during the night is filled with music and performance from young talented Koreans on the street. (Visit Seoul. Net, 2016a) 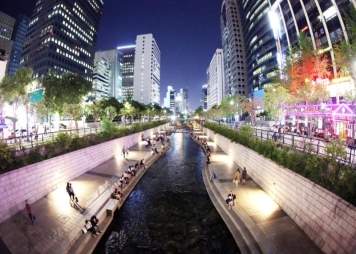 Cheonggyecheon stream is just located south of the Gwanghwamun station. The man-made river is about 13.7 km long (about 5.8km long in Seoul area) below the street level in Dongdaemun. It builded as a sewer during the Joseon dynasty to remove the drainage water that cannot be outflow to Han River on urban district during the rainy season. However in 2005, government decide to transform it to a modern pubic steam with 22 bridges and nine fountains to attract international tourists. Today, it has become a popular beautiful site in a busy city for people to entertain and leisure in Seoul. People enjoy a slow walk after having a meal or picnic with their family or friend and it also a nice dating place for couples. (Imagine Your Korea, 2017a) 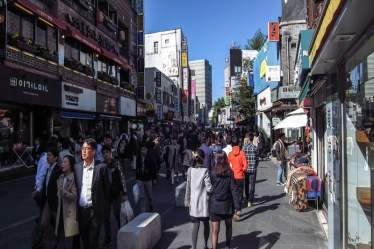 Insadong a popular district as it is the most interesting place in Seoul to shop, eat and experience the culture of Korea. These lanes fill with art galleries, restaurants, teahouses, trinket shops, craft shops and traditional hanok building. Insadong is famous for galleries because there are about 100 galleries from a range of Korean traditional painting and sculptures to folk’s art. Some of the best teahouses and restaurants are located in twisting alleyways.

People like to shop in many small and colourful stores and try out the street foods like hotteok (sweet snack filled with nuts, brown sugar and cinnamon), J-shaped corn with ice cream or green onion pancake while enjoy the culture dance and music performance on the street. Some of the traditional crafts and goods like hanji (traditional paper), hanbok (traditional clothing), traditional teas and pots and folk crafts can be purchase in Insadong. (The Seoul Guide, 2014) 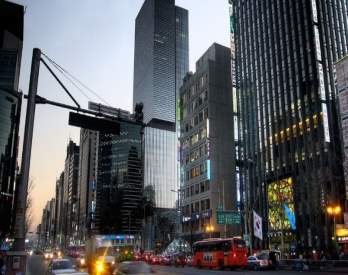 Gangnam literally means “South of the river” is locate south of the Hang River. It is now the richest and fastest develop city with trendy designer fashion stores, popular café and restaurants and nightclub or bar which attract most of the young people to Gangnam. It is also an entertainment district and business hubs with major business headquarters such as Samsung D’Light, and the COEX complex with convention centre and a large shopping mall. (Lonely Plant Seoul, 2015)
Today, Gangnam get popular because of the Korean rapper, PSY’s music video- Gangnam style. It boost the tourism figures to visit South Korean and bring up the Korean’s destination imagine. In 2012, it increase 13.4 percent of visitors from 2011. It also has attracted more Western fans and made them interested in Korea after they watch the video. (Tweedy, 2013)

Korean Tourism Organisation had organise a Gangnam tour for PSY’s fans who want to visit places in that represent Gangnam such as top salon and spas in Cheongdom, and head to Hangang Park for the duck boat ride, go shopping for real Gangnam style, strike at Coex and 7Luck Casino, and visit Gangnam’s beautiful night scene night club. Lastly, the trip cannot be end without learn some Gangnam style signature dance moves that are offered by dance academy. (Visit Korea.net, n.d.) 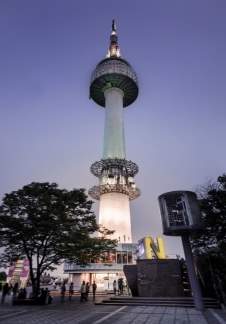 Namsan Mountain is right on the middle of the city of Seoul. The N Seoul Tower (479.7m) is located on the top in the Mt. Namsan, which has a beautiful view of the whole landscape of Seoul. Visitors can ride a cable car to enjoy the panorama view of city at the top of the tower and walk down along well marked trail by stairs. It is best spot for hiking, picnic and views of downtown of Seoul.

Namsan Park is the largest park located in Seoul with different variety species of plants, trees and animals. In April, Namsan Park holds a Cherry Blossom festival as it has the longest avenue of cherry trees and imposing view during the full blooms in Seoul. (Top 10 Seoul, 2015)

During the recent years, Seoul has attract tourists from world-wide by the success of Korean culture. According to tourist attractions site in Seoul, the inferred visitor target audience are:

Seoul is a romantic and vibrant city suitable for couples around 28-35 of age, who are office workers with a stable income. It is a good place for couples who are travelling together for their luxury honeymoon or love trips as there are several romantic places and exciting activities for dating in the city. They can enjoy walking and relaxing at the Cheongyecheon Stream in the busy city after shopping at Dongdaemun Market. There are many colourful light and fountains along the Cheonggyecheon stream which can add an extra element of romance during their night walk. N Seoul tower has become famous for the lover, as they can enjoy the spectacular view of the city and also the purchase love padlock which symbolize their eternal love. They can write down love messages on it, attach on the metal fence. The night life in Seoul is vibrant, they can spend their night at the best night club or bar at Gangnam, enjoy the DJs music, drink and dance with some other lively people.

Seoul is an incredible city in Korea that has delicious culture foods, unforgettable attractions and exciting shopping spots for groups of adult friends who are backpacker between 22-25 of age who are still study or graduated from university or just work in the industry. They might have limited money to spend, but still want to get fun in Seoul. They will travel around the city by convenience and inexpensive subways trains and buses. They can shop at Dongdaemun Market to get some bargain goods and eat at the street food stands. Insadong is known for its extensive range of shops, restaurants and museums. It is best places for them to buy culture souvenirs back for families and friends. Visit Gangnam where the world-wide famous music video “Gangnam style” were shooting at and appear in the music video and learn Gangnam style dance that offer by dance academy.

Overall, Seoul is a young vibrant and fast developing city with delicious foods, incredible shopping, and night life experience. It has good accessible public transport to travel around the city like Dongdaemun, Insadong, Gangnam and Namsan. The destination attractions in Seoul influences mostly adult couple and friends groups around 22-35, who travel for honey moon or who are influenced by the K-pop from television, online, video, newspaper and more.