Introduction:
It is paramount for all types of firms to invest into a costing system. Cost management enables a firm for continued progression to enable its budget to be more vigorous and ultimately more cost effective. This essay aims to outline the framework for the main two costing systems that determine the costs and predict the activities that are consuming the most resources. To retrieve these cost values, a firm can use one of the ‘traditional cost allocation’ method or the ‘activity-based costing’ method. Whilst scrutinising each method’s opportunities and challenges, its benefits and drawbacks will also be analysed.
Traditional Cost Allocation (opportunities and benefits):
The traditional cost allocation method has been described as the “absorption of production overheads (excluding selling and administration overheads) into product costs for stock valuation” (Letza and Gadd, 1994). The premise of this costing method is to calculate the indirect costs of a manufacturing business, with the notion of assisting managers make decisions beneficial for the organisation in terms of both costing and profitability. This is rendered by using only one overhead rate. Commonly, the machine hours or labour costs as these are directly relevant to the units produced, which can be shown by the following equation (Atrill and McLaney, 2015):

As there is only one overhead rate, there is an arbitrary allocation of excess costs to its total volume base. The CIMA Technical Services (2001) mentions the traditional costing system relies upon three stages to formulate its costs:
1. Accruing of all the costs within a department
2. Designate the indirect costs to the departments that are functional, from the total costs
3. The indirect costs calculated should then be applied to products and services.
These 3 stages allow for the costing system to align itself and be in accordance within the guidelines of the Generally Accepted Accounting Principles (GAAP) (Johnson, 2014). Moreover, for firms that produce only 1 product, this system allows for a quick and smooth implementation process. This is because the total volume allocation base will only cover the volume for the sole product in the firm’s entire production line (Hansen & Mowen, 2006).
Flaws of Traditional Cost Allocation & inception of ABC:
Over time the use of this traditional costing system has had its limitations and drawbacks. Whilst being in accordance with the guidelines of the GAAP, the traditional system for costing omits the costs created by customers. To use the results of costing in external financial reports, it excludes selling and administration overheads. The use of only one overhead rate eliminates many other potential costs associated within a firm’s entire production line, which can lead to unembellished imprecisions. (Atrill and McLaney, 2015)
In the past, the traditional approach in determining product costs has worked reasonably well. Overhead rates were typically of a much lower value for each direct labour than the rate paid to direct workers as wages or salaries. However, it is now becoming increasingly common for overhead rates to be between 5-10 times the hourly rate of pay due to the increased significance of overheads (Horngren et al, 1999). Even an insignificant change in the amount of direct labour worked on a job could massively affect the total cost deduced due to direct labour hours on the overhead cost loading. Moreover, overheads are still typically charged on a direct labour hour basis; overheads may not be closely related to direct labour however. (Atrill and McLaney, 2015)
Principles like these in the traditional system reduces the accuracy of the model, questioning the legitimacy of this costing approach. As a result, what arose was the opportunity for an alternative technique to overcome these flaws. This led to the inception of Activity-Based Costing (ABC)
Activity Based Costing: 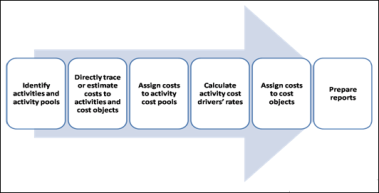