Water is one of the basic necessities of life next to air, food and shelter. But its provision varies from place to place in accordance with its yield in the hydrological setting and climatic characteristics in that area. The coastal location and the equatorial climate of Isokoland precipitated in heavy and long duration rainfall of over 3000mm per annum, and last for 10—11 months per annum (Efe, 2007). This scenario over the years has endowed the entire Isokoland with abundant groundwater and surface water recharge. But the discussion of water resources in the region has been glossed over to discussing those of Nigeria and Delta State water problem (see Ayoadc and Oycbande, 1983 and Efe and Olobaniyi, 2007). As such information of water resources in Isokoland is lacking in literature. Thus, this study of water resources in Isokoland is timely at this time when there is a global shortage of water supply. This paper is set to examine the sources, methods of purifying domestic water, factors of inadequate water supply and management measures adopted over the years in Isokoland.

Physio-graphically, Isokoland is located in a low-lying area of >l0m above sea level, and ii is drained by River Ase that is characterized with deep valley from which sand bars and fine materials are washed to its lower course. This area is also underlain by tertiary sedimentary formation, which has led to the variation in water depth, quality and yield. For instance, water level increases from 0 — 4m throughout the year and this scenario has encouraged abundant water supply in Isokoland.

Field survey research design was adopted for data collection with the aid of direct field observation and administration of questionnaires. Direct counting of water projects was carried out in the major accessible streets in Ozoro, Oleh and surrounding villages (where the questionnaires were administered) and also to ascertain their operators (from 6th August 11th August, 2007). The questionnaires were administered through systematic random sampling of 5 household intervals in each street, and the literate person in each household was used.

The researcher with the 300 level students of Geography and Regional Planning 2006/2007 session on fieldwork waited and collected the questionnaire immediately from the respondents on completion. A test-retest technique of administering 10 questionnaires at two different occasions was employed with the aid of Spearman’s Rank correlation analysis with r-value of 0.83, and the researcher did a facial content validity. Descriptive statistics were employed and the results arc discussed below.

The data collected from the field are presented in Tables 1— 4 and discussed below.

Sources of Water and Methods of Collection

There are three (3) basic sources of water supply in Isokoland, which include rainwater, bores and surface water. rflle predominant sources of water supply for Isokoland is rainwater harvesting, which indicates 53%. This is followed by bores (44%) and river/stream (3%). Comparing urban-rural water sources showed that most urban dwellers of Ozoro and Oleh patronize bores than the two water sources. This, however, negates the earlier view of Efe (2005) that 20% of Ozoro dwellers are engage in rainwater harvesting and in the rural areas of Ada, Ellu, Oyede, Ivwrogbo, and Ovorode etc, rainwater harvesting is vigorously carried out in these area (see table 1).

The disparities in these sources of domestic water could be ascribed to differential in income level, awareness and the price. On the other hand, only 3% of those residing at Ivwrogbo get their domestic water from River Ase.

However, in the rural communities where rainwater harvesting is being practiced, the rainwater is harvested from corrugated roofing sheets and collected through gutter into Bowls, Basin and Buckets. This is evident from 59% of the respondents that employed these methods. On the other hand, the inhabitants also employed the following means of water storage: artificial well (17%), Jerry can (17%) and Tanks (7%) (see Table 2).

On the other hand, the domestic water supply gotten from bores at Ozoro and Oleh is stored in tanks with 65% in private bores, and 35% in commercial. However, water gotten from the public taps are stored in bowl and jerry cans in various homes visited. From the communities visited, a total of 97 water bores were counted in area where the questionnaires where administered. Out of the 97 bores, a total of 59 bores are owned and maintained by private individuals for their private uses, 36 bores owned by private individuals but commercialized, while only 2 bores are owned and serviced by the State Water Board (see ‘fable 3). 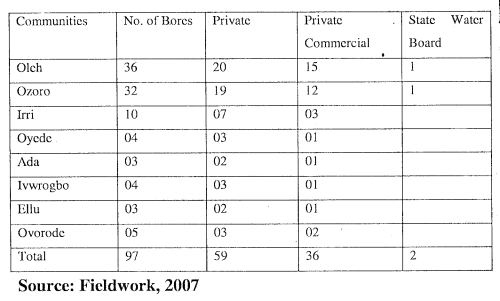 Water Treatments and Provider of Water

Asked why filtration and chlorination method is not adopted in their water purification, they all responded that it is time wasting and involve large capital outlay. Even the public water supplied by the State Water l3oard in Ozoro is not purified. Official of the State Water Board said that since the water is underground water, it does not need treatment more or less that there are no reported cases of water borne diseases in the area.

This price however varies with the availability of electricity in the area. For instance, when there is regular power supply 20 litres of water is sold for #3, but if generator is used in pumping the water, it is then sold for between #5 — #10. r1his price according to inhabitants of the area has invariably reduced the quantity of water utilized from this source to 20 litres; and during the wet season most of the inhabitants store more rainwater for domestic uses. The age of the bores in Isokoland fell within the 25 years acceptable useful threshold. For instance, most of the bores for domestic water supply in the area was dug over 10 years ago, as such most of the bores still have 15 years of useful life (United States Environmental Protection Agency, EPA, 2004). There is, therefore, the need to replace the pumping equipment (submersible pump) and the hydro-pneumatic tank for water storage. These equipment’s have attained their maximum useful age of 10 years.

There is generally an inadequate water supply in Isokoland. This is evident in most communities visited. For instance, in all the rural areas visited (Ada, Oyede, Ivwrogbo, Ellu etc.) there is virtually the absence of potable water supply. What could be seen in these communities is the presence of private bores and private commercial bores owners who dispense water to their individual homes and as well sell water to the public at the cost of #3 – #10. Some manual motorized hand pump in some of the communities (Irri, Oyede, Ellu etc.) is not functioning. Even at Ozoro where the urban water board dispenses water, the people complained of erratic water supply and at times no supply for some weeks. From the above problems, the inhabitants identified the following factors as being responsible for inadequate water supply in Isokoland.

Epileptic power supply ranked the highest factor of inadequate water supply in Isokoland, According to most of the inhabitants (93%), frequent power failure always leads to increase in price of water and reduction in the quantity of water consumed per household daily in the area, To overcome this problem government should ensure regular power supply to Isokoland.

The respondents ranked inadequate budgetary allocation and lack of maintenance culture equal as factors of inadequate water supply. Funds allocated to this sector by the Local and State Governments over the years is grossly inadequate and as such there is usually the difficulty in the provision of water to most of the communities in isokoland, and at times these funds are not even enough to maintain the existing water projects not to talk of investing in new water projects. There is, therefore, the need for the provision of enough fund for the provision of water supply to these communities most especially all the rural communities of Isokoland since most of the inhabitants live below the poverty threshold of one dollar ($1) a day. rfhere is also the need for more private and non-governmental sector participation in water supply to improve the current rate of supply. It is also recommended that since government cannot provide regular electricity supply to the area, it should abolish the charging of #5,000 and #10,000 for the private and commercial bore owners respectively. Similarly, since the disturbing network or system of the Ozoro water supply is over-aged (29 years) there is the need for the replacement of most of the pipes, though they still have 6 years of useful life (EPA, 2004).

Other factors arc carelessness and indiscriminate wastage and theft. It was observed that some adults and children play with the water by opening it down to run continually and occasionally fight ensue between individual, that often led to destruction of ta head, pipes etc. Also some submersible pumps have been stole most especially those in the rural communities and partly those in Ozoro and Oleh. To overcome these, there should be mass education on the need to take care of public utility in their communities and anyone caught stealing water equipment should be made to face the wrath of the law irrespective of his/her social or political class.

The study has been able to examine the water resource problems of Isokoland and has revealed that the livelihood and longevity of life of the people of Isokoland will not only depend heavily on portable water supply but on regular water provision to the rural and urban communities. To ensure this, there is need to implement the above policy measures.