Table of Contents (Jump to)

Geovisualization is set of tools and techniques to analyze geospatial data with the use of interactive visualization. It’s identical with large datasets of spatial data, means creating geovisualization requires large datasets handling. In the past it was almost impossible to visualize and analyze this large spatial data, but it changed since the rapidly development of technology these past decades, as tools have been developed by individuals and organization. As a result, spatial information becomes more available and accessible to support the use of location information for other related fields in order to produce better analysis and clearer visualization.

Many researches have been conducted in geovisualization field. Different approaches are implemented to create a number of software such as: statistical data exploration, graph drawing techniques, exploratory visualization with multiple linked view, visualizing individual spatio-temporal behavior, design of spatio-temporal data visualization tools, etc. The technologies and approaches are applied based on type of data to be visualized and the result expected for geospatial. For example: flow map is used in analysis of migration and disease spread in the U.S. this flow map purpose is to show a form of weighted location-to-location network, the pattern movement of people or disease from one location to another location. Whereas, another map visualization will be preferable with different aim of visualization such as chloropleth map is to show statistical data aggregated for each area such as state or city by coloring or shading these regions. Generally in choropleth map, differences in hue are used to indicate qualitative differences, such as land use, while differences in saturation or lightness are used to indicate quantitative differences, such as population.

In renewable energy area, Eurostat has published time series (per year) web based map with statistic illustrated for Renewable energy generation of European Union member. The map created is a cloroplath map using different colors that refers to percentage range of renewable energy share of each country in gross final energy consumption and electricity generated from renewable energy. 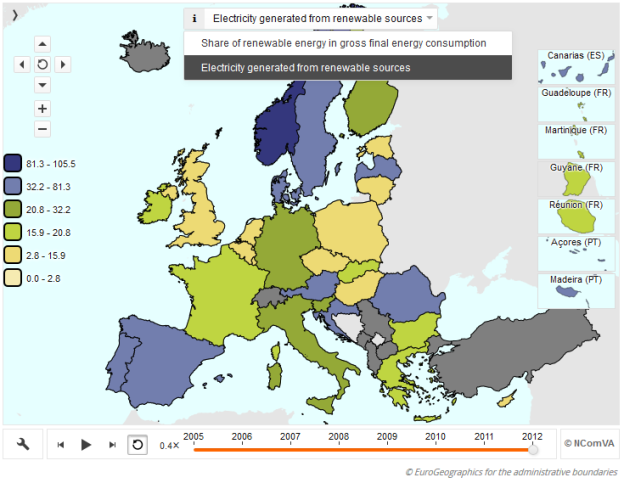 This thesis aims to create web-based geovisualization of renewable energy to monitor the growth of renewable energy share in Germany especially in electricity production. Data is obtained from enerymap.info that collects data from EEG messages in form of csv file. Two main ways to visualize data proposed are graphs and maps. Main visualization result will be the different aggregation level of area in Germany (based on states and counties), time series and statistics.

To be able creating web based geovisualization, mapping technology and graph tools creator becoming issue. There is a need of tools that provide functionality to create map and graph with fast response that support web based application performance. Topojson is proposed to be used as mapping visualization combined with graph to show the statistical illustration. One tool free available that has the ability to connect topoJSON map and data in array format to create maps and graphs is D3.js. This JavaScript library is fast and efficient to handle large dataset and enabling maps with interaction and animation (Köbben, 2013). To create web based geovisualization, this thesis proposes the use of free tools to develop the web based application. However, because of the input data is in German format, all numerical values that are needed for statistical illustration is saved in text values, pre processing to re format data is necessary and will be done in arcGIS using phyton code. Additionally, geo processing tools from arcgis are also needed in the pre processing stage to group and select important data from the large dataset to be visualized in the web based geovisualization. Shapefiles result of geo processing will be stored in topoJSON contains both gemotry values and properties that will be processed as input for final visualization using web based tools and d3.js library.

According to European Energy Security Strategy document(strategy, 2014), energy is a vital part of Europe’s economy that motivates European commission to secure energy supplies and open access to energy sources in order to provide affordable price. There are several policies to rule energy supplies: EU’s 2020 energy and climate policies, energy efficiency and renewable energy policies. In between 1995 and 2012, total demand of energy decreased gradually due to economic crisis, structural changes in EU’s economy and significant increase of crude oil price. During that time period, crude oil still dominate the energy demand among other sources, but surprisingly the number has declined slightly from around 21% to 17%, in contrary, share of renewable energy has doubled to almost 11%. The increase share of renewable energy has helped European countries to gradually suppress demands of energy imports, even though oil still holds the largest quantity for almost 90% import dependencies for energy sources.

Germany as one of EU member has set national integrated climate and energy package as follows for EU’s 2020 energy and climate policies. One of the main focuses of the national commitments is in electricity generation considering electricity has relatively high share in many sectoral levels such as: industry, agriculture, residential, service and transport.

Nowadays, spatial information is more available influences by the growth of web GIS technology and supporting tools. One of the purposes of developing geovisualization with web-based mapping technology is to increase the accessibility of spatial data through online system. However, because geographical data is identical with large dataset, needs technology and database with fast response to develop a web-based GIS application because both of aspects will influence over all website performance. A paper with title: Developing Efficient Web-based GIS Application has published nand this research focuses on the comparison for mapping technology and databases for webGIS application(Adnan, et al., 2010). Based on this paper, tile based maps are preferable than static map renders. Tile based map can handle large data set by divided maps into different zoom levels. Various popular use tile based maps geovisualization technique are Google maps, yahoo maps and open layers. This map is faster to load because only respond to user specific location requests. However, at the end section of this paper, writer proposes preferable database and mapping technology to be implemented in webGIS application to give better performance for web application. Flash map that based on vector images becomes the final choice for fly rendered map capability and it’s developed along with popular tools adobe illustrator and already integrated with an API in ArcGIS (ArcGIS Flex API) and flash with google map API. While for the database of web GIS requires efficient performance of database in response user request, because the nature of GIS web-based application needs large amounts of geographically referenced data to be displayed from database. Oracle is final choice to handle large dataset among other databases free available tools. However, both for mapping technology and database are commercial software, not free available even though both offered great functionality to create web GIS application. Moreover, flash map requires flash player in the web browser to enable user view the map.

In another research, Luca Morandini writes: Getting the best performance for GeoJSON Map visualizations: PostGIS vs CouchDB back-end, explains another possibility to visualize map through online system with technique called TopoJSON. This research mentions Geojson is one possibility to send geometries data from server to client. Geojson is formed by encoding geographic data structure into one object. Geojson supports various geometry types such as: point, lineString, polygon, multipoint, multiLineString, multiPolygon, and geometryCollection. However the extended of GeoJSON called TopoJSON format is considered to be more effective for geographical data because the reduction of response size by applying a topological approach. GeoJSON is handy dealing with browser but causes duplication of polygon’s border, while topoJSON is encoding topology that creates geometry simplification and defines polygons as arcs collections that shared by adjacent polygons that reduces file size. According to this research, TopoJSON data size is reduce about 30% from original geoJSON(Morandini, 2013). The reduction of file size used in web application will improve the performance and response of user request. In addition, tools to create both geoJSON and topoJSON are freely available.

D3.js provides many functions for graph and also map to build customize visualization framework. D3.js is easy to use and written in a functional style that can be reuse and add specific functions to create desired content. D3.js gives full customize ability to developer to create the visualization by support of various d3.js functions(Anon., n.d.). d3.js is used in web application to utilize web page communication with data that are with form of JSON or loading external data: csv, geoJSON, topoJSON or database.

D3.js is a JavaScript library to manipulate Data Object Model (DOM) by binding data, apply transformation and transition to create interactive data visualization. D3.js library works with combination of other tools such as HTML and CSS to create web based visualization system (Maclean, 2014).

Two main focuses for using d3.js in this thesis are to create graphs and mapping visualization. In creating graph, external or JSON data can be used. Firstly, create canvas with svg object by setting margin and graph area. This svg will be the container to bind data to be visualized in the application. Then, data rendered with data() command. Next, set scales domains and ranges of x and y axes with domain() and scale() commands. Lastly, add text or modify the appearance of the graph(Mulder, 2014)

Not only to create graph visualization, d3.js is also can be used to create mapping visualization. D3.js includes several common projections in it’s library to support mapping visualization. There are 3 main steps to create mapping visualization using d3.js: create projection function with projection system options from d3.js, create path function that will store all geometry values, using geojson or topojson as object data to draw map in path (Jenson, n.d.). All geo functionalities to build the map are provided by d3.js. There are significant invested amount of time to learn geoJson structure but once user familiarwith the function and data structure, visualization can be easily to create. Thus, d3.js can be utilized to create various geovisualization techniques such as: stack display, iconic display, dense pixel display and also interaction techniques that can be added to create a more interactive visualization, such as: standard, projection, filtering, and zoom (Dykes, et al., 2005) . D3.js is also fast and efficient to handle large dataset and enabling maps with interaction and animation (Köbben, 2013)